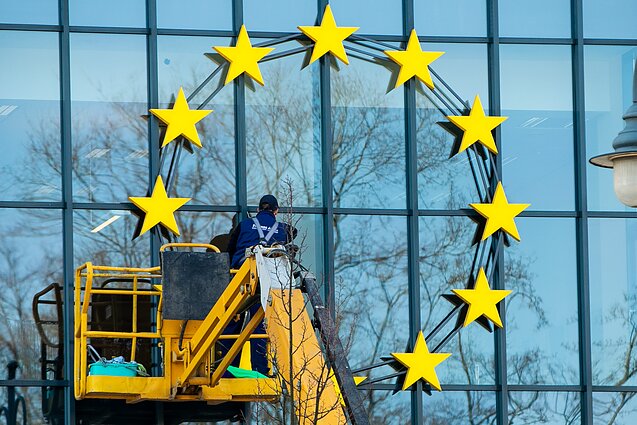 A lot has changed since the 2004 enlargement of the European Union, which included the Baltic States, but despite waning enthusiasm and illiberal tendencies, the bloc continues to inspire its neighbours for change, reports EUobserver, a partner of LRT English.

On May 1, 2004, the EU flags were raised in Cyprus, the Czech Republic, Estonia, Hungary, Latvia, Lithuania, Malta, Poland, Slovakia, and Slovenia.

For millions of central and eastern Europeans, it was a homecoming celebration.

That is what “accession” meant to many who felt that their countries – after decades of totalitarian rule – were returning to where they belonged, to Europe, as sovereign, independent states.

One of them was Donald Tusk, now the president of the European People’s Party (EPP), but previously European Council president and Poland’s prime minister.

“For me, the enlargement was my political dream that finally came true. I was genuinely moved,” he told EUobserver.

“Twenty-five years of fighting to return to Europe, understood as a political and civilisational community – which, in other words, meant my whole adult life,” Tusk said about what enlargement meant to him.

As part of the same wave of accession, Romania and Bulgaria then joined in 2007, and Croatia became an EU member in 2013.

“The most tangible change is, of course, the transformation of the former countries of the Soviet bloc into well-prospering democracies. People who live there, and we are talking here about 100 million Europeans, have experienced an unprecedented leap forward in civilisation,” Tusk said.

He added that the European perspective for Ukraine, Moldova and the Balkan countries has triggered positive changes there as well.

When the EU received the Nobel Peace Prize in 2012, one of the reasons cited was enlargement.

But the wave of accession, dubbed the ‘Big Bang’, also meant that consensus on often difficult issues facing the EU had to be reached across 27 member states (and 28 while the UK was still part of the bloc).

Some have called for the creation of a ‘two-speed Europe’, in which a small group of EU countries pursue tighter integration, a prospect which central and eastern Europeans have rejected.

Yet ‘multi-speed’ is already a fact of life in the EU: Romania and Bulgaria have not yet been allowed to join the passport-free Schengen zone, while Cyprus, Estonia, Latvia, Lithuania, Malta, Slovakia, and Slovenia have since introduced the euro.

Tusk said he “can understand those who are concerned with the crisis of liberal democracy in the countries of central and eastern Europe, especially in Poland and Hungary”.

Tusk added, however, that this “phenomenon unfortunately has a much wider character”, pointing to outgoing US president Donald Trump, Turkey’s Recep Tayyip Erdogan and Brazil’s Jair Bolsonaro, while “we can also see the increasing significance of political radicalism in many European countries, for example, in Italy or Spain”.

“I am convinced, however, that this is a seasonal occurrence, and that democracy has taken root for good also in the eastern part of the continent, and that it still continues to have a pulling power for others – whose beautiful example is the revolution in Belarus,” he said.

While support for EU membership remains at a record high in central and eastern Europe, there has been some disillusionment with the radical economic and political transition, which populist politicians in the region now exploit.

“I do not downplay politicians who are building their position on negative emotions and resentments, who use anti-European rhetoric, but frankly speaking, I do not see them as successful in a longer-term perspective,” Tusk stated.

“People sometimes choose Orbáns and Kaczyńskis, but for other reasons than the membership in the EU,” he said, referring to the Hungarian and Polish leaders.

The EU has nevertheless lost some of its appetite for further enlargement – even as several Balkan countries seek to join, and jump through hoops to meet the necessary conditions.

Tusk said even with waning enthusiasm, it was “important that the EU does not resign from strengthening its presence in its closest neighbourhood – and does not give up on the idea of enlargement”.

“It is in our interest that Ukraine or the Balkans should be more European than Russian, that China and Turkey should not replace Europe as an attractive role model and an end port for millions of people, whose dreams about freedom, stabilisation and prosperity are so similar to my dreams from a few decades ago,” he concluded.

This story was originally published on  EUobserver  , a partner of LRT English.