Why World War 3 could happen in 2019 – threats from North Korea, Syria and Putin 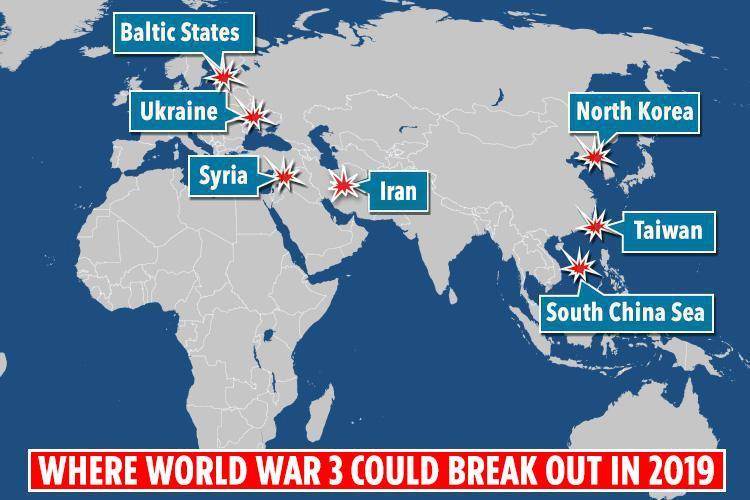 RISING tensions around the globe along with spectacular war games and weapons testing have increased fears of a major military conflict breaking out in 2019.

Here we look at trouble spots which could be potential World War 3 flash points.

Our map shows the flashpoints where there are currently military standoffs which could suddenly turn nasty and bring the major powers into conflict with each other.

Experts believe the Baltic States, Ukraine and Syria are danger zones in a world more unpredictable than during the Cold War. This is because of Russian meddling as President Vladimir Putin attempts to recreate a superpower sphere of influence it lost after the fall of the Soviet Union in the early 1990s.

Meanwhile in Asia, China has unveiled its largest rise in defence spending in three years as it bids to dominate the world with a vast superpower military.

Could war break out between the West and Russia?
The much diminished ISIS pails into insignificance when compared to the threat Russia poses.

The new head of Britain’s Army, General Mark Carleton-Smith said as much this week. In an interview, he warned: “Russia today indisputably represents a far greater threat to our national security than Islamic extremist threats such as Al-Qaeda and ISIS.

“Russia has embarked on a systematic effort to explore and exploit Western vulnerabilities, particularly in some of the non-traditional areas of cyber, space, undersea warfare.”

Tension remain high after Russia annexed Crimea in 2014 and also because of an ongoing conflict between Ukrainian troops and Kremlin backed Russian separatists in the Donbass region.

On Sunday the Russian military seized three Ukrainian naval ships and 23 crew following alleged shoot outs off the coast of the Crimean peninsula The Baltic states — once in the fold of the Soviet Union and have a sizeable ethnic Russian population — fear they are on Russian leader Vladimir Putin’s hit list.

Not for nothing did NATO hold the largest war games last month in neighbouring Norway since the Cold War. Meanwhile Russia has carried out its own large scale war fighting exercises. And its submarines and aircraft continue to probe European land and sea borders on a more or less permanent basis.

Today it emerged the Russian military has begun deploying a new missile system designed to operate in the Arctic. The deployment comes as the country said it is preparing for the arrival of new American missiles in Europe after Donald Trump threatened to quit a Cold War era arms treaty.

Why is Syria regarded as a World War 3 flashpoint?
There is continuing conflict in Syria — now nearly eight years old and responsible for the deaths of at least 500,000 people

Since 2016 evil dictator Bashar al-Assad has been backed by Putin raced, putting Russian on a collision course with the West. This year a chemical attack on civilians outraged the world  and the regime may be tempted to use poison gas again as it bids to finally stamp out the rebellion

Tensions later reached boiling point when at least 70 people were gassed to death by a nerve agent in the Syrian town of Khan Sheikhoun, prompting Trump to order missile strikes after blaming the regime for the attack.

Russia and Iran said they will respond to further American military actions following the US air strikes.

Could the US and China go to war in 2019?
Bejing’s 2018 defence budget was an astonishing 1.11trillion yuan (£127billion), according to a bombshell report issued at the opening of an annual meeting of parliament.

China’s military power has dramatically increased in recent years. It now has more warships and submarines than the United States. It is currently contesting the oil and gas rich South China Sea with its neighbours.

Beijing is doing this by building artificial islands on which military installations of all kinds have been based in a bid to control the seas which are dominated by the powerful US Navy.

The spectre of a invasion of Taiwan  — which broke away from China in 1949 — is ever present and in 2019 President Xi Jinping may decide to reunite the “renagade state” with the mainland in time for the 100th anniversary of the Chinese Communist Party.

Could war break out between America and Iran?
Donald Trump pulled out of an international agreement on Iran’s nuclear programme earlier this year and reimposed sanctions on Tehran, He claims the Islamic republic had broken the deal by secretly building nukes.

The sanctions have exacerbated a financial crisis in Iran that has sent the value of its currency tumbling, leading to widespread protests and warnings of revolution. The regime may wish to divert attention by carrying out revenge attacks on Israel and the US.

Is North Korea really a threat to world peace?
North Korean leader Kim Jong Un and Trump pledged to work towards denuclearisation at their landmark June summit in Singapore. But the agreement was short on specifics and negotiations have made little headway since. And it appears Kim is doing little to dismantle his missiles despite promises made to the US President.

Earlier this month images within a report from the Center for Strategic and International Studies which has identified 13 secret facilities used to produce missiles and related technology.

Will Donald Trump risk starting a world war?
Arms-control experts say the rest of the world really should be worried about the potential fallout from some of the President’s tweets. John Andrews, International affairs expert and veteran foreign correspondent, told Sun Online: “He [Trump] will be a real challenge for diplomats.

“One of the reasons is that we’ve become used to there just being one genuinely unpredictable world leader and that was Kim Jong-un. “Now we have a second, Donald J Trump – and we are waiting to see how he will preside.

“There are big question marks over his character that came up during the campaign – is this alarmist? “It’s difficult to know.”

What is the latest Kashmir-Pakistan conflict
The region of Kashmir has always been a contentious issue even before India and Pakistan won their independence from Britain. The local ruler of the region chose India because Kashmir was free to accede to either India or Pakistan.

Many people who live in the region do not want to be controlled by India – they want independence or a union with Pakistan. The inhabitants of Kashmir are more than 60 per cent Muslim making it the the only state within India where they are in the majority.

There has been violence in the area since 1989 but fresh violence hit the area after the death of a militant leader in July 2016. On February 27, India claimed it shot down a Pakistani warplane after two of its fighters were downed by Pakistan, in a terrifying escalation of tensions between the nuclear-armed neighbours.

Military spokesman Maj Gen Asif Ghafoor said the Pakistan air force had shot down the jets after they crossed the border leading to the capture of two pilots – one of who is reportedly being treated in hospital.

Disturbing footage emerged showing local Kashmiris kicking and punching one of the pilots across the head and body as he lies helpless on the ground.

Tensions between the two nuclear-armed neighbours have reached boiling point after India carried out air strikes against Pakistani militants on February 26 in Balakot – located in a remote valley in Pakistan’s Khyber Pakhtunkhwa province.