Vilnius has been equipped with new green areas: almost 500 trees and an orchard have been planted 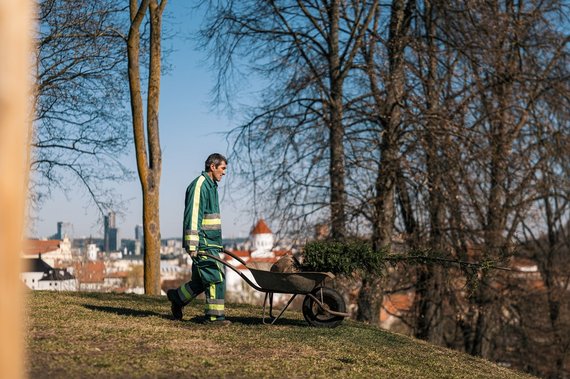 Parks, meadows, gardens, forests… there is a reason why Vilnius, a city surrounded by so much nature, is called the greenest capital of Europe. Both locals and city guests appreciate green spaces, and real estate developers are convinced that when urbanising districts, special attention must be paid to landscaping.

‘Darnu Group’, one of the largest real estate development companies in Lithuania, which constantly contributes to the creation of a sustainable and green city, has taken a green initiative – in two days, almost 500 trees have been planted in as many as six different areas of the capital. Hundreds of new pines will now grow in Naujamiestis, Paupys, Old Town and other districts, and a garden will be supplemented with new trees and renewed by planting apple trees, plums and hawthorn that will soon bloom.

The newly planted trees adorned the triangle at the intersection of Geležinio vilko and Pietario streets, Kūdros Park and Missionary Gardens, Steponas Batoras Street, and part of the trees were allocated to increase the green areas of the city, including the Markučiai green triangle and the old road to the station. ‘It is important for us to take a responsible approach to nature. It is also no coincidence that we have chosen this specific number of trees to be planted – it is supposed to signify the 460 apartments built in Paupys district last year.

We symbolically allocated each of them a tree in the city’, says Sigita Survilaitė-Mekionienė, General Director of ‘Darnu Group’. According to her, such a tree planting initiative, a way to contribute to the preservation of the name of Vilnius as the greenest city in Europe, is a gift to the city, its inhabitants and future generations. ‘Darnu Group’ has invested EUR 20,000 in the tree project.

‘We take care of the needs of the residents of the city districts. When selecting trees, we consulted with landscape specialists, the municipality, listened to the opinions of communities, and also paid attention to what would appeal to the residents and would be beneficial to nature and birds’, assures Sigita Survilaitė-Mekionienė.

According to her, as time passes, the initiative of planting trees is becoming more and more important and is gaining more and more support from the public and the residents of Vilnius. Since this year’s gatherings were adjusted by a pandemic – trees, unlike before, were planted without the involvement of various communities. ‘It is very unfortunate that due to the quarantine we could not organise a celebration for the community and invite them to join us. We value the connection established with the residents, and we want them to be satisfied with the environment in which they live.

This year, we invite people to enjoy the trees that have already been planted and evaluate the new green spaces’, says Sigita Survilaitė-Mekionienė ‘Darnu Group’ has been organising tree-planting initiatives for many years. After completing the ‘Antakalnio terasos’ (‘Antakalnis Terraces’) project, the company donated almost 900 trees to the city of Vilnius, which reflects the number of apartments that were built in the settlement. At that time, 169 spruce trees, 141 birch trees, 381 pine trees and 163 oaks were planted in Vilnius with an idea for all of them to reflect the respective numbers of apartments installed and included in the projects ‘Eglių terasos’ (‘Spruce Terraces’), ‘Beržų terasos’ (‘Birch Terraces’), ‘Pušų terasos’ (‘Pine Terraces’) and ‘Ąžuolų terasos’ (‘Oak Terraces’).

550 trees were planted in Vingis Park and on the banks of the Neris River in Žvėrynas and Antakalnis, and in some nearby places paths for walking barefoot were installed, which is another gift of the company to city residents and its visitors. ‘When urbanising the city, we never forget the connection with nature. We will continue the initiative that has already become a tradition, as green spaces are one of the most important aspects that determine the well-being of people’, says Sigita Survilaitė-Mekionienė.