UK’s May to give another try in Brussels, as EU doesn’t expect breakthrough 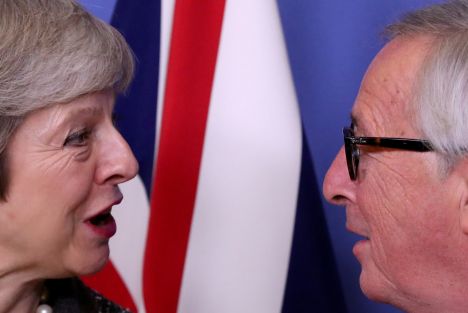 The Prime Minister of the United Kingdom, Theresa May, returns to Brussels on Wednesday, seeking to convince European Commission chief Jean-Claude Juncker to save her Brexit deal.

Canadian-British news agency Reuters reports on Wednesday, February 20, that as 37 days are left until the United Kingdom is set to withdraw from the European Union, her options are either to persuade the British parliament or the European Union to change their positions.

The core of the crisis is the so-called Irish backstop, an insurance policy to prevent the return of extensive checks on the sensitive border between EU member Ireland and the British province of Northern Ireland.

The current deal seems to be unacceptable to the UK parliament, therefore May is seeking legally binding changes to the deal, although the EU side has repeatedly such an option was on the table.

A representative of the British PM for May called the Brussels trip «significant» as part of a process of engagement to try to agree on the changes her government believes parliament needs to pass the deal.

However, an aide for Juncker quoted the Commission president as noting on Tuesday evening: «I have great respect for Theresa May for her courage and her assertiveness. We will have friendly talk tomorrow but I don’t expect a breakthrough.»