U.S. military presence in the Baltic region remains one of the fundamental deterrents 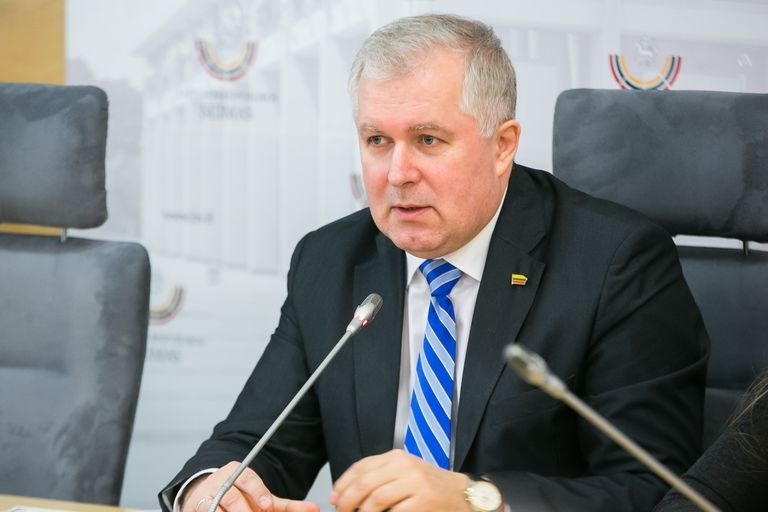 “I am pleased to welcome another U.S. Army rotation in Lithuania. U.S. military presence in the region remains to be one of the fundamental deterrents. I would like to emphasise that we will continue making every effort to ensure the continuity of this rotational presence and the growth of strength of our cooperation with the U.S. Allies,” said Minister of National Defence Arvydas Anušauskas. Today he with Ambassador of the U.S. to Lithuania HE Robert Gilchrist was present at the Colors Uncasing Ceremony held by the most recent U.S. Army battalion rotation at the General S.Žukauskas Training Area in Pabradė.

I’m proud to join Minister Anušauskas for this Colors Uncasing Ceremony today,” Ambassador Robert Gilchrist said. “The 2-8 CAV could not be here without Lithuania’s outstanding host nation support. They are here because Lithuania is a strong Ally. They are here as evidence of the unremitting U.S. commitment to NATO, to Europe, and to the security of the Baltic states.”

The Colors Uncasing Ceremony, official start of the service of the new U.S. rotation, was also attended by Commander of the Lithuanian Land Force Brig Gen Raimundas Vaikšnoras.

Minister A. Anušauskas and Ambassador R. Gilchrist met after the ceremony for a discussion on topical issues of cooperation. Minister thanked for close and successful cooperation with the U.S. and underscored the importance of U.S. assistance to the development of Lithuanian Armed Forces capabilities. He also reiterated that cooperation with the United Stated would stay among the topmost priorities of the new Lithuanian Government.

8th Cavalry Regiment, 2nd Battalion, U.S. Army, deployed in Lithuania with dedicated heavy equipment in mid-December. The rotation is planned to carry out training in Lithuania for around 8 months, until the end of summer. The U.S. rotation is under the command of Lieutenant Colonel Steven Jackowski.

The U.S. troops deployed from their home base at Fort Hood, Texas, with their own weaponry and equipment: Abrams tanks, Bradley armoured IFVs, etc. They have already begun cooperation activities with soldiers of the Lithuanian Armed Forces and the NATO enhanced Forward Presence Battalion Battle Group.

The U.S. military personnel strictly adhere to COVID-19 safety requirements to prevent the spread. According to Lt Col S. Jackowski, safety of the soldiers and the communities they are deploying to is the most important priority.

The U.S. Army rotations deploy as part of Operation Atlantic Resolve of the U.S. Army in the eastern part of the Alliance. It is a reassurance about the collective defence commitments to NATO allies concerning European security following the aggressive Russian actions in Ukraine. U.S. forces have been rotating in to train in the Baltic States and Eastern Europe since spring 2014.

The United States is Lithuania’s strategic partner and the main ally in ensuring security in the Baltic region. It is actively involved in implementing security measures in the Baltic States, strengthening security and stability in the region. With its troops, equipment and financial resources, the United States is actively contributing to the defence of our region. Under the European Deterrence Initiative, financial support for strengthening the defence capabilities of European countries, including Lithuania, and for improving military infrastructure is consistently increased every year. The U.S. is also one of the main partners in arms procurement.

The United States makes significant investments in adaptation of Lithuanian military areas to military needs, aside from other areas of cooperation, as part of security assistance programmes. Several projects have been already completed on U.S. funds at Pabradė, Rukla, Kazlų Rūda, such as firing ranges, maintenance capability, other training and area upkeep infrastructure. Lithuania is expanding training areas and improving infrastructure to provide the best training conditions possible and facilitate interaction on its behalf as well. Additional investments are made into areas that improve military mobility: e.g., the new railhead of Pabradė-Pažeimenė railway line near Pabradė opened in spring last year improves conditions of deploying military vehicles and equipment of NATO allies. It was first tested out for redeploying military equipment by an outgoing U.S. rotation.