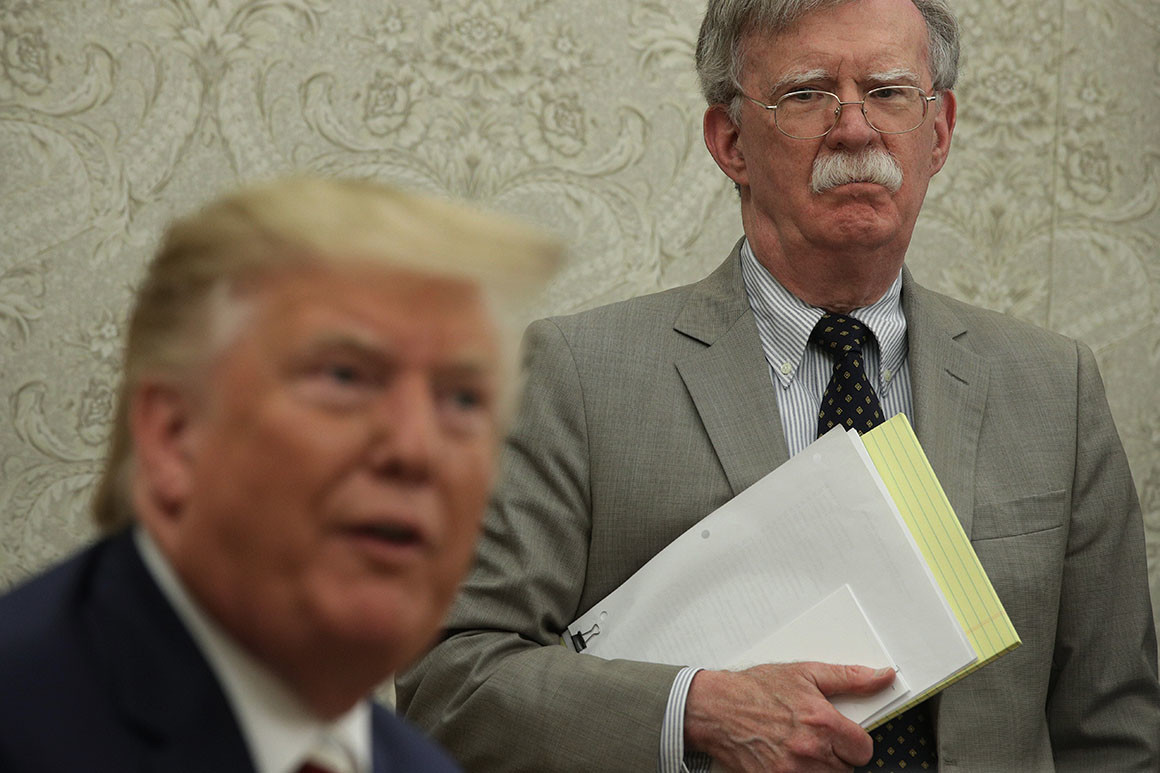 President Donald Trump on Tuesday abruptly forced out John Bolton, his hawkish national security adviser with whom he had strong disagreements on Iran, Afghanistan and a cascade of other global challenges.

The sudden shake-up marked the latest departure of a prominent voice of dissent from the president’s inner circle, as Trump has grown less accepting of advice contrary to his instincts. It also comes at a trying moment for Trump on the world stage, weeks ahead of the United Nations General Assembly and as the president faces pressing decisions on difficult foreign policy issues.

Tensions between Bolton, Trump’s third national security adviser, and other officials have flared in recent months over influence in the president’s orbit and how to manage his desire to negotiate with some of the world’s most unsavory actors. Since joining the administration in the spring of last year, Bolton has espoused skepticism about the president’s whirlwind rapprochement with North Korea, and recently has become a vocal internal critic of potential talks between Trump and leaders of Iran and Afghanistan’s Taliban.

Bolton also broke with Trump with his vocal condemnation of Russia’s global aggressions, and last year he masterminded a quiet campaign inside the administration and with allies abroad to persuade Trump to keep U.S. forces in Syria to counter the remnants of the Islamic State and Iranian influence in the region.

Bolton’s maneuvering at the time contrasted with former Defense Secretary Jim Mattis’ decision to instead resign over Trump’s December withdrawal announcement, which has been effectively reversed.

On Twitter Tuesday, Trump and Bolton offered opposing accounts on the adviser’s less-than-friendly departure, final shots for what had been a fractious relationship almost from the start.

Trump tweeted that he told Bolton Monday night his services were no longer needed at the White House and Bolton submitted his resignation Tuesday morning. Bolton responded in a tweet of his own that he offered to resign Monday “and President Trump said, ‘Let’s talk about it tomorrow.'”

Trump explained that he had “disagreed strongly” with many of Bolton’s suggestions as national security adviser, “as did others in the administration.”

Bolton’s letter of resignation, dated Tuesday, was only two sentences long. He wrote: “Dear Mr. President, I hereby resign, effective immediately, as assistant to the president for national security affairs. Thank you for having afforded me this opportunity to serve our country.” He signed the letter “Sincerely, John R. Bolton.”

South Carolina Sen. Lindsey Graham, who had been traveling with Trump Monday, said reports of Bolton’s opposition to a now-scrapped weekend meeting with the Taliban at Camp David were a “bridge too far” for Trump.

And one Republican familiar with the disagreements between Trump and Bolton said the adviser’s opposition to a possible meeting between Trump and Iranian President Hassan Rouhani was a precipitating factor. French President Emmanuel Macron has been trying to broker such a meeting, possibly on the sidelines of the upcoming U.N. General Assembly, in hopes of salvaging the international Iran nuclear deal from which Trump withdrew.

“There were many times that Ambassador Bolton and I disagreed. That’s to be sure,” said Secretary of State Mike Pompeo Tuesday. He added that Trump has been clear that he is willing to meet with Rouhani “with no preconditions.”

Treasury Secretary Steven Mnuchin, who appeared with Pompeo at the White House, volunteered, “The president’s view of the Iraq war and Ambassador Bolton’s was very different.”

….I asked John for his resignation, which was given to me this morning. I thank John very much for his service. I will be naming a new National Security Advisor next week.

A former Bush administration official, Bolton has championed hawkish foreign policy views dating back to the Reagan administration and became a household name over his vociferous support for the Iraq war as the U.S. ambassador to the U.N. under George W. Bush. Trump initially supported the 2003 U.S. invasion, but subsequently became a vocal critic.

The Iranian government hailed Bolton’s departure, and spokesman Ali Rabiei said it might pave the way for warmer relations. “By dismissal of the biggest supporter of war and economic terrorism, the White House will face less barrier to understand realities of Iran,” he said in a tweet. Tehran calls the U.S. sanctions on Iran “economic terrorism.”

Pompeo said, “I don’t think any leader around the world should make any assumption that because some one of us departs that President Trump’s foreign policy will change in a material way.”

Bolton’s well-known foreign policy views and harsh rhetoric for U.S. foes had turned him into a convenient boogeyman for the likes of North Korea and Iran, which have assailed him in the media.

His ouster came as a surprise to many in the White House. Just an hour before Trump’s tweet, the press office announced that Bolton would join Pompeo and Mnuchin in a briefing on an executive order expanding ways to counter terrorism. He did not.

As pressure has mounted amid global troubles and signs of an economic slowdown at home, Trump has increasingly favored aides who are willing to defend him on television. Bolton was tentatively booked to appear on a pair of Sunday talk shows in late August but backed out, saying he was not comfortable with some of the administration’s plans, and that drew the president’s ire, according to a White House official not authorized to discuss private conversations.

Bolton and his National Security Council staff were also viewed warily by some in the White House who saw them as more attuned to their own agendas than the president’s — and some administration aides have accused Bolton’s staff of being behind leaks of information embarrassing to Trump.

He was always an unlikely pick to be Trump’s third national security adviser, with a world view seemingly ill-fit to the president’s isolationist “America First” pronouncements. He briefly considered running for president in 2016, in part to make the case against the isolationism that Trump would come to embody.

Still, Trump had admired Bolton for years, praising him on Twitter as far back as 2014. Trump had told allies he thought Bolton was “a killer” on television.

Defending Bolton after Tuesday’s announcement, a person close to him said they had been authorized to say one thing — that since he had been national security adviser there had been no “bad deals” on Iran, North Korea, Russia and Syria. The person, who did not divulge who had given the authorization, was not allowed to discuss the issue by name and spoke only on condition of anonymity.

When asked to respond to the person’s comment, White House press secretary Stephanie Grisham smiled and told reporters, “Sounds like just somebody trying to protect him.”

Sen. Chris Murphy, D-Conn., said the turnover in the president’s foreign policy team was a cause for worry.

“John Bolton was the wrong choice and the silver lining to this instability is that there will be fewer people whispering war chants in the president’s ear,” said Murphy. “But no one of any quality is going to take a job in the nation’s national security cabinet so long as everyone’s head is permanently hovering slightly above the chopping block.”

But Utah Sen. Mitt Romney, the GOP’s 2012 nominee for president, bemoaned Bolton’s ouster, calling it “an enormous loss for the country and for the administration.”

He added that “in decision making you want people who disagree and who offer a very different perspective.”

Bolton was named to the post in March 2018 after the departure of Army Gen. H.R. McMaster.
_