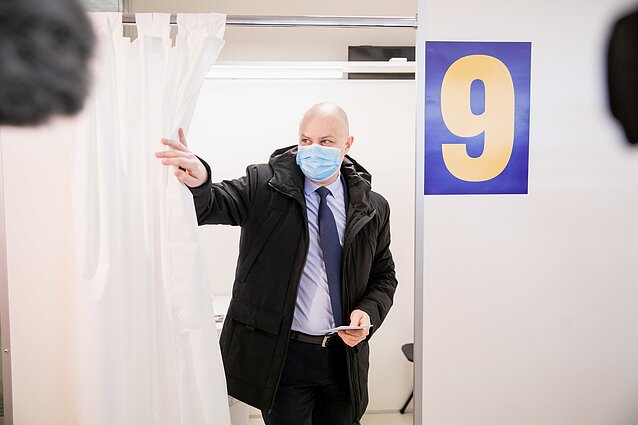 The government set aside over 7 million euros to impose lockdown restrictions, with the lion share being allocated for the travel bans that lasted from mid-December until April 7. Was the measure worth it?

The measure was discontinued because it had already been “exhausted”, Lithuanian Health Minister Arūnas Dulkys said on Tuesday.

“We have to admit that this measure […] has exhausted its possibilities,” he said, adding that the travel restrictions helped ease Lithuania off the “mountain” of a record number of infections.

The travel restrictions were imposed in December when Lithuania registered thousands of new coronavirus infections each day, peaking at 3,934 on December 29. Since then, it began to decline.

Most of the funds for travel restrictions, which also includes the Easter ban imposed by the previous government last year, were allocated to the officers’ extra pay.

“These funds were paid out to officers [from] the police, the border guards, rescue and fire service, public security service, and financial crime investigation service,” Božena Zaborovska-Zdanovič, spokeswoman of the Interior Ministry. “The biggest share was allocated to the police officers.”

However, according to the former health minister, Aurelijus Veryga, the multi-million measure made sense during the holidays, when people travel across the country.

When left in force for four months, at times it did more harm than good, he said.

“I would feel how unfair it was when a father with children was travelling to go sledding, but he had to be turned around and returned to a big city, where there were a lot of people in large parks,” Veryga told.

“I think it was more of a psychological reassurance measure for the government rather than a measure that gave much results,” he said.

Although there have been huge funds allocated to impose travel restrictions, the measure still failed to achieve its goal, according to Veryga.

“In the context of controlling the pandemic, it is not an amount that could change much. The [Covid-19] tests alone, most likely, cost several million euros per month,” he said. “You can’t say that the [travel restrictions] was an expensive measure, but did it achieve the result? I think not so much.”

“The number of new infections has begun to climb and there are other reasons to blame, not only the travel [between municipalities],” according to Veryga.

Lithuania’s coronavirus situation has been deteriorating since mid-March, and has once again climbed into more than 1,000 new cases registered for the past three days.