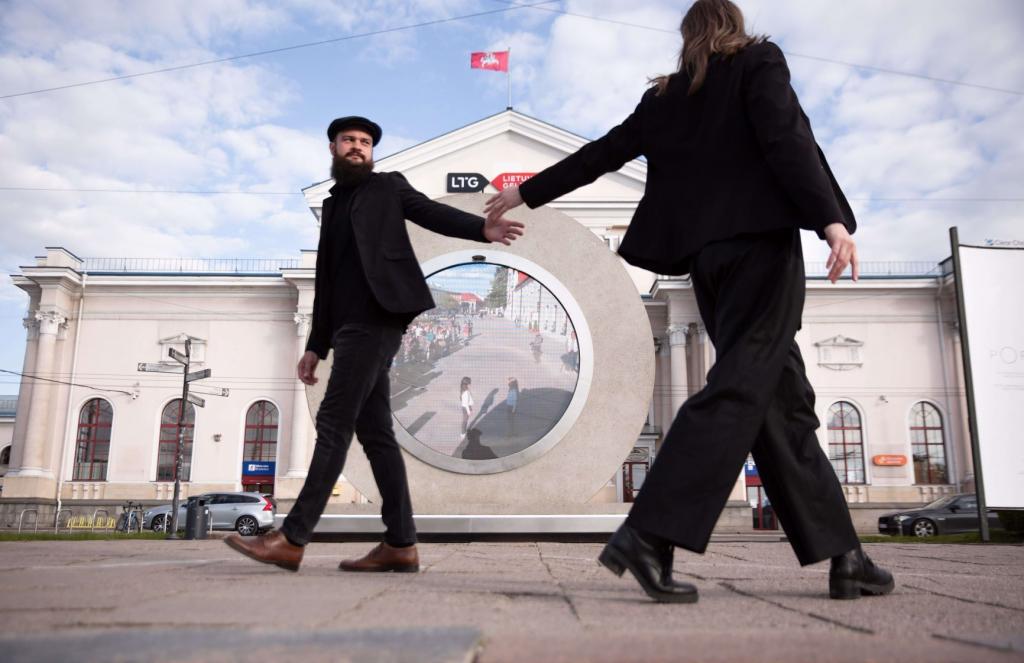 The project brings people of different cultures together and encourages them to broaden the perceptions of self, nation and unity

Tired of pandemic travel restrictions? Longing to meet new acquaintances from near and far? Well, for a start, you can use the new time-space portal connecting the Lithuanian capital Vilnius with the Polish city of Lublin.

The gateways of the PORTAL which resemble identical concrete circular doors with a large screen inside can be found next to Vilnius Train Station and at Litewski Square in Lublin. Using cameras, the installation transmits images between both locations via Internet, allowing people in Vilnius and Lublin to make contact in real time.

The futuristic-looking PORTAL is the result of a cross-border project initiated by the Vilnius-based Benediktas Gylys Foundation, in cooperation with the City of Vilnius, the City of Lublin and the Crossroads Centre for Intercultural Creative Initiatives.

The project which officially opened on 26 May had been five years in the making. Cities in Lithuania and Poland were an obvious choice given the strong historical links – after all, the two countries formed a Commonwealth, or a dual state from 1569 to 1795.

According to the organisers, the PORTAL is supposed to serve as a visual bridge and community accelerator that brings people of different cultures together and encourages them to rethink the meaning of self, nation and unity. The PORTAL, organizers claim, induces an “overview effect”, a feeling experienced by astronauts who, watching the Earth from outer space, undergo a radical change in self-awareness and attain a strong sense of community.

To represent the visual ‘bridge‘, engineers from Vilnius Tech LinkMenų fabrikas chose a circle, a recognised sci-fi symbol and epitome of the wheel of time. According to its creators, the PORTAL’s form, minimal design and aesthetics also help shape the image of a future city.

“Humanity is facing many potentially deadly challenges; be it social polarisation, climate change or economic issues. However, if we look closely, it’s not a lack of brilliant scientists, activists, leaders, knowledge or technology causing these challenges. It’s tribalism, a lack of empathy and a narrow perception of the world, which is often limited to our national borders,” says Benediktas Gylys, President of the Benediktas Gylys Foundation and initiator of the PORTAL concept, as quoted by Vilnius.lt. “That’s why we’ve decided to bring the PORTAL idea to life – it’s a bridge that unifies and an invitation to rise above prejudices and disagreements that belong to the past. It’s an invitation to rise above the “us and them” illusion.”

The project aims to create a communication platform not just for passers-by, but also for institutions and organisations. So, Lublin now gets a chance to showcase its projects to the Lithuanian capital, and vice versa.

And hopefully, the PORTAL will not fizzle out as a one-time project. The organizers dream of installing dozens of PORTALS across Europe and around the world to encourage local communities embracing social experiments and bridging the divide between nations and cultures.