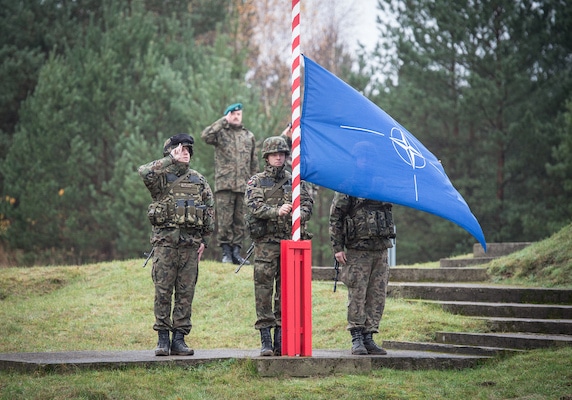 The Washington Post has published a long piece calling for NATO to take on a new official enemy — China. The piece is written by Sara Bjerg Moller, an assistant professor in the School of Diplomacy and International Relations at Seton Hall University. She argues that after 30 years since losing the Soviet Union as its official enemy and struggling to find a replacement to justify its continued existence, a perfect replacement would be China.

I’ve got a better idea. Let’s just put NATO out of its misery and terminate it.

After all, let’s not forget NATO’s original mission: to defend Europe from the possibility of an invasion by the Soviet Union, which had been America’s and Britain’s World War II partner and ally but which had been converted to their official enemy at the end of the war.

But the likelihood of a Soviet invasion of Europe was always nil. The Soviet Union had been decimated by World War II, especially as a result of the German invasion of the country. Even though the invasion was ultimately repelled and Germany was defeated, the Soviet Union’s industrial capacity had been destroyed, not to mention the millions of Russian citizens who had been killed. The last thing the Soviet Union wanted was another war, especially given that the United States possessed nuclear weapons and had shown a willingness to employ them against large cities.

The advocates of a national-security state in the United States, however, needed a new official enemy to replace Nazi Germany, especially to justify the conversion of the U.S. government from a limited-government republic to a national-security state, a type of governmental structure with omnipotent, non-reviewable powers. The Soviet Union and “godless communism” fit the bill perfectly. The American people were then inculcated with the notion that there was an international communist conspiracy to take over the United States and the rest of the world that was based in Moscow, Russia.

To convince Americans and western Europeans that the Soviet Union posed a grave threat to them, U.S. officials pointed to the postwar Soviet occupations of Eastern Europe and East Germany as examples of communist aggression. They apparently forgot that President Franklin Roosevelt had delivered such lands into the hands of Soviet leader Joseph Stalin, who FDR affectionately referred to as his “Uncle Joe,” at their wartime summit in Yalta. Was it really too surprising that Stalin accepted FDR’s gift, especially given that Eastern Europe and East Germany would serve as a buffer against another German invasion of the Soviet Union?

It was within this fervent anti-communist environment that NATO was formed. But in 1989, the Cold War suddenly and unexpectedly came to an end, which, needless to say, put the U.S. national-security establishment and NATO into a panic. After all, the Cold War was the justification for both of these institutions. With no Cold War, they could both be dismantled.

Meanwhile, unwilling to let Russia go as an official enemy, NATO began gobbling up former members of the Warsaw Pact, with the aim of placing U.S. troops and missiles ever closer to Russia’s borders and with the hope of provoking a reaction, which ultimately came about in Ukraine.

As Moller argues, however, Russia poses no real threat to Europe and, therefore, cannot be seriously considered to be a justification for NATO. Instead, she argues, it’s time to replace Russia with China, owing to China’s rise as an international powerhouse. The reasoning is classic empire-think: If a nation starts to prosper and rise, it’s best to put it down before it gets too large and powerful.

How about just leaving China and Russia alone? What’s wrong with that? What’s wrong with other nations becoming prosperous? The fact is that NATO should never have been established in the first place. Moreover, the biggest mistake in U.S. history was to convert the federal government to a national-security state. The best thing American could do now is terminate NATO and restore a limited-government republic to our land.

Jacob G. Hornberger is founder and president of The Future of Freedom Foundation. He was born and raised in Laredo, Texas, and received his B.A. in economics from Virginia Military Institute and his law degree from the University of Texas. He was a trial attorney for twelve years in Texas. He also was an adjunct professor at the University of Dallas, where he taught law and economics. In 1987, Mr. Hornberger left the practice of law to become director of programs at the Foundation for Economic Education. He has advanced freedom and free markets on talk-radio stations all across the country as well as on Fox News’ Neil Cavuto and Greta van Susteren shows and he appeared as a regular commentator on Judge Andrew Napolitano’s show Freedom Watch.

The Future of Freedom Foundation