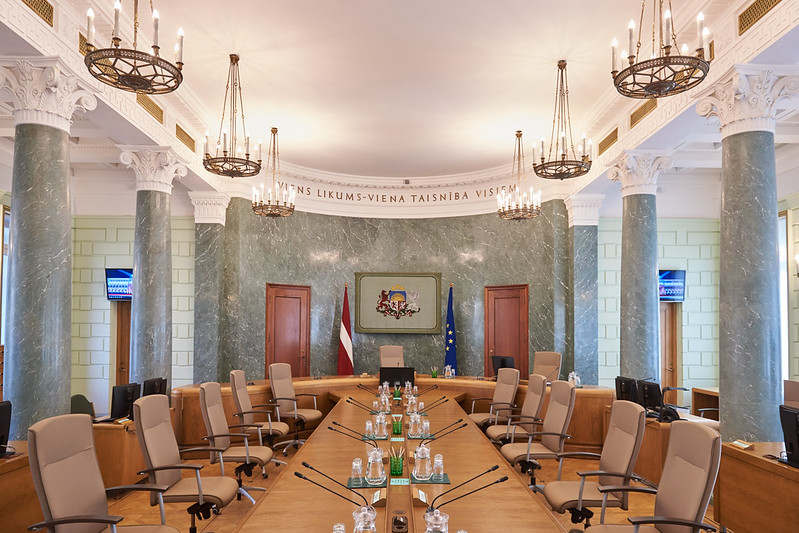 A meeting of the Latvian Cabinet of Ministers on April 28 approved initiatives from various ministries aimed at aiding the financial recovery from the global recession that seems inevitable as a result of the COVID-19 crisis.

The Cabinet supported an Economics Ministry proposal to allow employers to apply the Labor Law more flexibly and pay 70 percent of wages in case of downtime.

According to the present law, employees have to pay 100 percent wages even when workers are furloughed.

The ministry explained that these and other amendments will allow employers to organize the existing jobs more flexibly, preserving them instead of liquidating jobs.

The government also decided at the April 28 meeting to support a proposal of the Ministry of Culture to expand the range of self-employed persons eligible for downtime benefits.

In order to promote economic recovery during the Covid-19 crisis, the government decided to allocate up to 75 million for road infrastructure projects.

The money will be allocated to the Transport Ministry from contingency funds.

Linkaits said that in the situation of crisis, investments in road infrastructure is a far-seeing decision. “Public infrastructure development projects stimulate the country’s economy, ensures jobs and tax revenue into the state budget. Additional funding will renew and renovate roads and bridges that are in a poor condition, improve traffic safety on roads and will positively affect construction business and related sectors,” the minister said.

About 50 road construction projects will be selected, assessing a number of criteria, including the technical condition, traffic intensity and others.

Salna said that the total funding deficit in the road construction sector can be estimated at EUR 4 billion. This year the sector received more than EUR 255 million from the budget. The additional funding will help to increase the number of projects that can be implemented.

The Transport Ministry also said that, considering the state of emergency in the country, it is important not to allow the economy to cool down, stimulate economic growth and business.

The ministry also said that in 2019, 37 percent of asphalt roads and 51 percent of gravel roads were in a poor or very poor condition.

Tax revenue this year might shrink by EUR 1.5 billion due to the Covid-19 crisis, the Finance Ministry said in its draft Stability Program for 2020-2023.

The Finance Ministry reports that a significant decline in macroeconomic indicators is expected in relation to the Covid-19 crisis.

The ministry expects that the gross domestic product (GDP) will shrink by 7 percent in contrast to the earlier forecast of a 5.6 percent growth. As a result, tax revenues are planned to shrink by EUR 1.5 billion. Earlier, budget revenue was planned at about EUR 10 billion.

The forecasts include the support measures for overcoming the Covid-19 crisis, such as changes in payment of the value added tax (VAT), tax holidays, as well as restrictions introduced to curb spread of the disease, such as ban on operations of gambling halls.

In the coming years the ministry expects the economy to gradually recover, projecting a 1 percent GDP growth in 2021, and a 3.5 percent growth in 2022.

Ministries told to save

Revising expenditure in this year’s budget for events that will not be held due to Covid-19 pandemic, ministries have freed EUR 3 million, the Finance Ministry reported.

The Finance Ministry collected information from all ministries, and in total about EUR 3 million can be freed. Adding EUR 1.4 million that were freed in early March, the total sum reaches about EUR 4.4 million.

The ministry said that funding has been found from postponing the sports and culture events that were planned in the first half of this year, from business trips, etc. If events are postponed to next year, the budget bill does not allow to transfer the funding to next year’s budget.