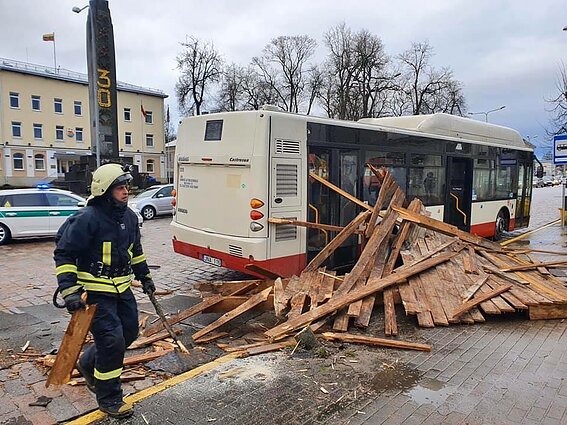 A storm that began Thursday night killed a woman and inflicted damage across Lithuania. Over 100,000 households remained without power on Friday morning, most of them in the country’s western and northern regions.

The Fire and Rescue Department has received 471 calls by Friday morning over the consequences of the storm.

These included damage to power lines, buildings and trees having fallen on cars, the service has told BNS.

Most of the calls, 93, came from Klaipėda County by the Baltic coast, followed by 66 in Vilnius County.

On Thursday night, a section of a roof ripped by the storm killed a woman in Ukmergė. The same piece also damaged a bus.

In all, there have been 13 reports of trees having fallen on cars, the Fire and Rescue Department said.

Over 100,000 households across Lithuania were still without power on Friday morning due to strong winds, the country’s power distribution company Energijos Skirstymo Operatorius (ESO) said.

“The majority of them are in Klaipėda region and northern Lithuania,” Tomas Kavaliauskas, spokesman for ESO, told BNS.

Most of the failures were caused by damage to power pillars and lines. Thousands of transformers also shut down.

Winds were dying down in the morning to 14-18 metres per second, she said.

Water levels rose by 1.32 metres in the port on Thursday, and ship traffic was restricted on Wednesday night.