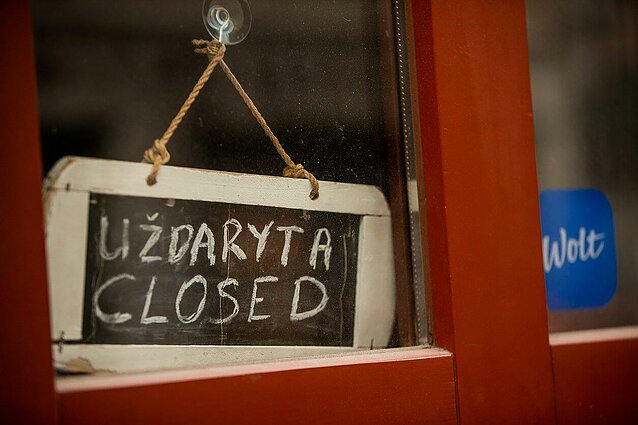 Some DIY and specialised stores in Lithuania have been setting up food aisles to stay open during lockdown, drawing criticism from small firms that have been forced to shut as well as the government.

Under the nationwide lockdown, which came into effect on Wednesday, only shops that sell food, drugs, and medical and veterinary supplies are allowed to stay open.

Vytenis Butkevičius, the president of the Marketplaces Association, complains that some non-grocery chains are trying to bypass restrictions by mixing in food items among other commodities.

Such practices have also been noticed by the government.

“If some of the big retailers are trying to bypass restrictions by opening a snack section, that is clearly not what our decree [on lockdown] is about,” Prime Minister Ingrida Šimonytė said on Wednesday.

“If this is really happening, we will be talking with business associations in order to stop this kind of practice immediately. Otherwise, we will change the regulations,” she added.

But the fact that all supermarkets are allowed to stay open represents illegitimate discrimination, according to Dalia Matukienė, the head of the Council of Small and Medium-sized Businesses, a body that advises the government.

The big supermarket chains usually have non-food sections the size of stand-alone stores. Moreover, shop owners have been preparing for the second wave of the coronavirus pandemic and invested into safety, she told LRT TV.

“They installed additional exits, so that customers won’t cross paths, even instituted ways to make sure people don’t stay longer than needed,” said Matukienė, adding that small businesses were diligently observing all recommendations hitherto issued by the government. “And now they are being punished.”

On Thursday, Šimonytė suggested that supermarkets might be ordered to seal off their non-food sections, if they attract too many shoppers.

“Given the need to limit contacts [among people] and reduce the amount of time people spend away from home, we will have no choice but to propose restrictions on the sale of a certain range of products in major shopping centres, too,” the prime minister told the parliament.

To offset some of the losses, the government has agreed on subsidies for affected businesses, which still need to be approved by the parliament.

If the measure is approved, the government will fully cover pay for furloughed workers up to the amount of two times the minimum wage.

Economy Minister Aušrinė Armonaitė has said that the complaints from small retailers are reasonable and the government will offer additional subsidies.