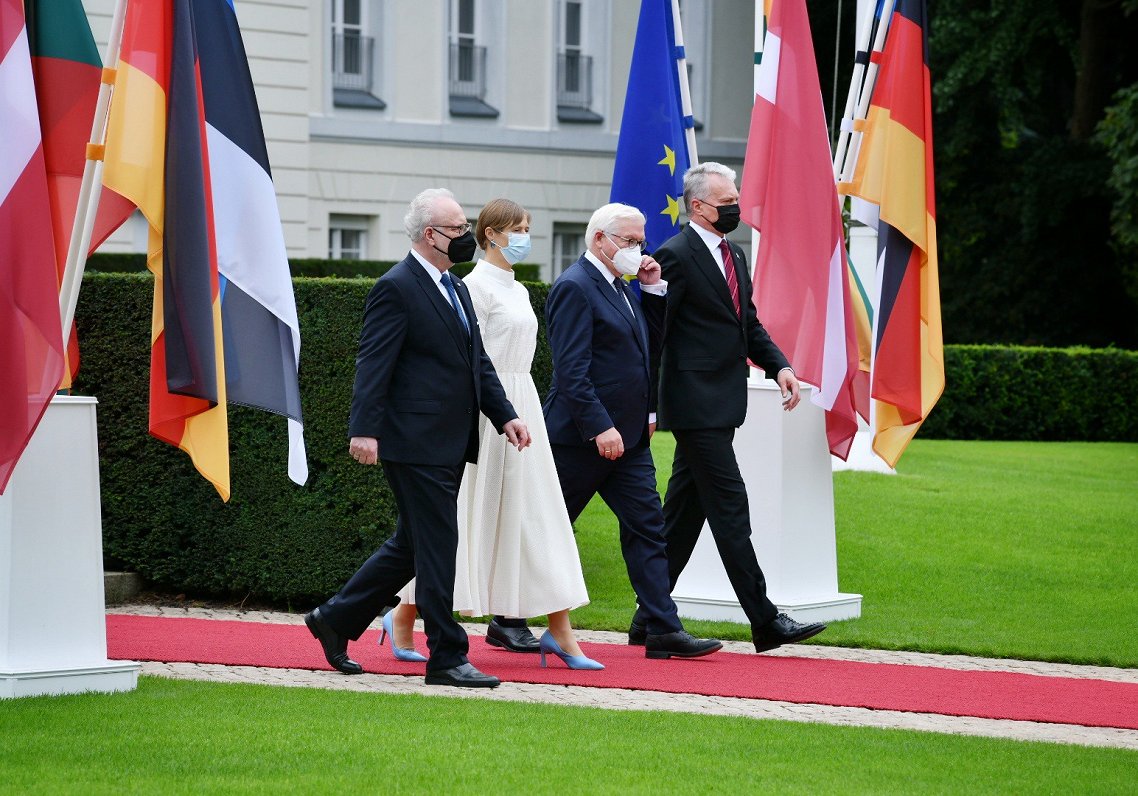 President Egils Levits was in Germany September 16, for a visit to the country in which he spent much of his youth, alongside his counterparts from Estonia and Lithuania to mark 30 years of diplomatic relations between Germany and the Baltic states.

Playing host was German President Frank-Walter Steinmeier, who delivered a speech to his Baltic counterparts at a luncheon they enjoyed together. The text of Steinmemer’s speech is reproduced below from the official  website of the German Federal President.

Epistula non erubescit. A letter does not blush, wrote Cicero. In modern German, we have a similar saying: “Paper is patient,” meaning that it’s possible to write a great deal down on paper without this necessarily having any immediate consequences.

As you arrived, the displays behind glass showed us quite the opposite. Paper can be impatient, momentous, world-changing. Like the exhibits from the Political Archive of the Federal Foreign Office, which trace the turbulent history of our countries’ relations. These are documents which have shaped world history, such as the provisional agreement on the restoration of normal relations between Germany and Latvia, dated 15 July 1920, the letters of response from your Foreign Ministers at the time concerning the exchange of notes on the establishment of diplomatic relations with Germany, dated 28 August 1991, and last but certainly not least, the inquiry by the Friends of the Norderstedt Puppet Theatre concerning the possibility of holding events in Estonia. Yes, culture too is an inseparable element of our bilateral relations!

Today, I have come full circle. Not long after I took office, in the summer of 2017, I spent quite some time touring your countries. I still remember one August day very well – that fateful date, the twenty-third of August. In Tallinn, dear Kersti Kaljulaid, at the Academy of Sciences, I endeavoured to sketch out how our countries’ turbulent history is crystallised in this twenty-third of August, from the darkest hours, the signing of the Hitler-Stalin Pact in 1939, to the most joyous ones, the Baltic Way in 1989, that human chain calling for freedom, which inspired bold individuals in the East of my own country, too. I spoke about how our shared history still affects us and shapes the responsibility that we bear today. And about how history must never be wielded as a weapon, but rather how we should learn from it and accept the obligation it imposes on us, for a better future.

In Riga I had the privilege of visiting the Museum of the Occupation with your predecessor, dear Egils Levits, and talking to young people about the digital future. And with your predecessor in Lithuania, dear Gitanas Nausėda, I visited the Bundeswehr troops who are stationed in Rukla as a concrete expression of our solidarity with our fellow members of the Alliance, and paid tribute to the victims of the Holocaust in Paneriai.

The past and the present – both form part of our countries’ relations. And it is because we face up to our past that we are able to work in the present for a better future.

During previous visits, we have strolled together through the garden of Schloss Bellevue. Or, as Schiller wrote:

“[…] fleeing at last the prisonlike chambers And the small-minded talk, gladly escapes unto you.”

After the months of lockdown, the cancelled trips abroad, the lack of face-to-face meetings – what a wonderful escape, to leave the confines of the office. What a joy to see you again, absorbed in face-to-face conversation.

And I am particularly delighted by your visit today because I know what a deep connection you have to my country, not least by virtue of the paths you have taken in life.

You, dear Kersti, have always used your office to draw attention to the dangers of climate change – even taking part in an expedition to Antarctica. Last summer you were my first official guest since the outbreak of the pandemic. I have fond memories of the one-hundredth birthday celebrations for the Estonian embassy and of the dinner we had together. And your gift, a smart e-bike, was quite the success. I can assure you that it is still used every day here in the garden by me and my team. If you would like to borrow it during your visit, please feel free – Berlin is a wonderful city for cycling in!

You and I, dear Egils, are united by our shared academic background in law. As far as I know, there is no other foreign head of state who has two German state examinations under their belt and has worked at a Higher Regional Court. After our last conversation my office manager groaned: “Those two are made for each other.” In my view, there can be no better compliment for an enriching conversation. A very warm welcome, dear Egils.

You too, dear Gitanas, have studied in Germany and got to know the country and its people; as a young man, you even carried out an internship with the German Bundestag. As part of the European Council you helped to launch the European Recovery Fund, and you stand up for a strong Europe which has a voice in foreign policy, too. I am delighted that we are meeting once again after your inaugural visit to Berlin and our brief exchange in Sofia. It is wonderful to have you here, dear Gitanas!

Today, as partners within the European Union, we are more closely intertwined – both economically and politically – than ever before. Links between our businesses and universities, our cultural sites and research institutes have flourished, almost more than we could have hoped. Our political relations are close and trusting.

Yes, it’s true that in Germany we often instinctively look to the west. The decades of the Iron Curtain still have an impact decades later. And it remains true that the Franco-German friendship is a fundamental element of a united Europe. But good European policy is only possible when my country works closely with all member states, in the north and south, in the centre of Europe and in the north-east.

When we talk about the future of Europe – and the major conference which will give every citizen of this Union a voice is currently taking place – we want to hear the voices of the Baltic countries and their people, too. Your countries belong to the heart of Europe. Your contribution to the future of Europe is valuable, indispensable. Current foreign and security policy issues show just how true this is.

It is because your countries lie on the EU’s external border that you have our utmost solidarity when it comes to protecting this border, including against the cynical attacks by the regime in Belarus.

When we look beyond the EU’s external borders, then our gaze naturally falls, at present, on Afghanistan. Estonian, Latvian and Lithuanian soldiers, too, have made great sacrifices over the last 20 years. The failure of the transatlantic alliance in Afghanistan must be addressed and analysed, by all of us together. I personally would already draw two lessons from it, which may seem contradictory, but are not: There can be no European security without the US. And: We need to take on more European responsibility, too, for European security. Not outside of NATO, not by duplicating structures within the EU, but as strong, confident Europeans within NATO.

In the Baltic Sea region, we can see on a daily basis how much we need NATO as a strong alliance. I am unsettled by the renewed increase in military tensions on your borders, on the borders of the EU. Hardly a day goes by without Russian military aircraft ascending over the Baltic Sea; fighter jets are increasingly frequently violating your countries’ airspace. Since the illegal annexation of Crimea and the Donbass, and the gathering of troops on the Ukrainian border, the threat level and the risk of incidents are more severe than they have been in a long time.

My message today is that you are not alone in this situation. Anyone who threatens the Baltic states threatens the entire North Atlantic Alliance, and threatens Germany. This is why the Bundeswehr is leading a battlegroup in Lithuania, this is why the German air force, alternating with other NATO partners, is protecting the airspace over the Baltic Sea. We are sending out a clear message that the territorial integrity and sovereignty of NATO’s member states are non-negotiable!

There are few countries, if any, which I have visited more often than yours during my time in office as Federal Foreign Minister and then, for the last five years almost, as Federal President.

Beyond the diplomatic protocol and political meetings, I have always found it enormously enriching on a personal level to engage in conversation with artists and intellectuals. I have enjoyed a moving encounter with the great Lithuanian poet Tomas Venclova, a breath-taking concert by the Latvian organist Iveta Apkalna at the Elbphilharmonie in Hamburg, and a meeting with Arvo Pärt in Tallinn, to name just a few. The rich culture of your home region, these three states so wrongly labelled “small”, and their myriad, multi-faceted ties with Germany continue to fascinate me – even after dozens of visits.

We have a great deal in common. So let us raise our glasses. To the friendship between our countries and peoples! To our shared future, united in freedom and in peace!