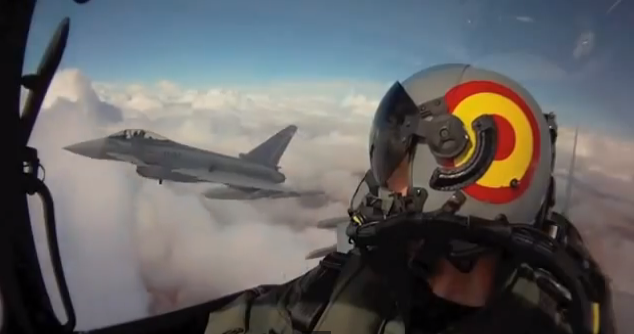 On May the 1st the Spanish Air Force is to take over the lead of Baltic Air Policing, which is NATO’s mission safeguarding the airspace over the Baltic Allies Estonia, Latvia and Lithuania.

The Spanish F-18 fighter home base is Zaragoza Air Base in the northeast of the country some 300 km away from the Capital Madrid.

“My country will be actively supporting the mission almost three and half thousand kilometers away from Zaragoza, home to our wing back in Spain, while at the same time ensuring Air Policing at home,” said the Spanish Detachment Commander, Lieutenant Colonel Jesus Gutierrez Gallego.

For Spanish pilots this trip will be the third in a row.

Recently, the Ministry of Defence of Lithuania reported that last week, NATO fighters rose five times to escort Russian military aircraft. Then Russian planes flew in the international space over the Baltic Sea.

As noted in the department, the pilots flew out on assignments every day for a week. In four cases, these were Russian cargo carriers An-26, in one – the Su-24 fighter.

Russian aircraft did not violate the borders in any of these cases, so even the Belgians look at the “exploits” of their pilots with bewilderment.

“What is the point here? Russians flew in international airspace. It seems that the Belgian Air Force was farther from home than the Russians,” one of the readers commented on the publication of the Lithuanian Ministry of Defence on the interception of Russian aircraft in the sky over the Baltic Sea.

It should be understood that all flights of the so-called “mission to protect the airspace of the Baltic countries” take place exclusively for training pilots in a possible theater of operations. Thus, NATO pilots study the enemy live.

In turn, the Lithuanian politicians, supporting the hysteria about aggressive Russia, did everything possible to make their country the hottest place of a possible military conflict of superpowers.

Realizing such a scenario is very simple: the Spanish Air Force, which will control the airspace of the Baltic countries, already has the sad experience of handling military equipment.

It is worth recalling the accidental launch of an air-to-air missile in the sky over Estonia in August 2018, which occurred due to a mistake of the pilot of the Spanish Air Force fighter. According to the military, the ammunition flew about 80 kilometers and fell in Endla Nature Reserve away from settlements.

At that time, a global catastrophe was avoided. However, in other circumstances, such unprofessionalism or an open provocation of the foreign military in the Baltic region can lead to irreversible consequences. Among them is a possible military conflict with Russia, which could happen due to the disorder of the NATO soldiers.