Shocking results of survey in Lithuania 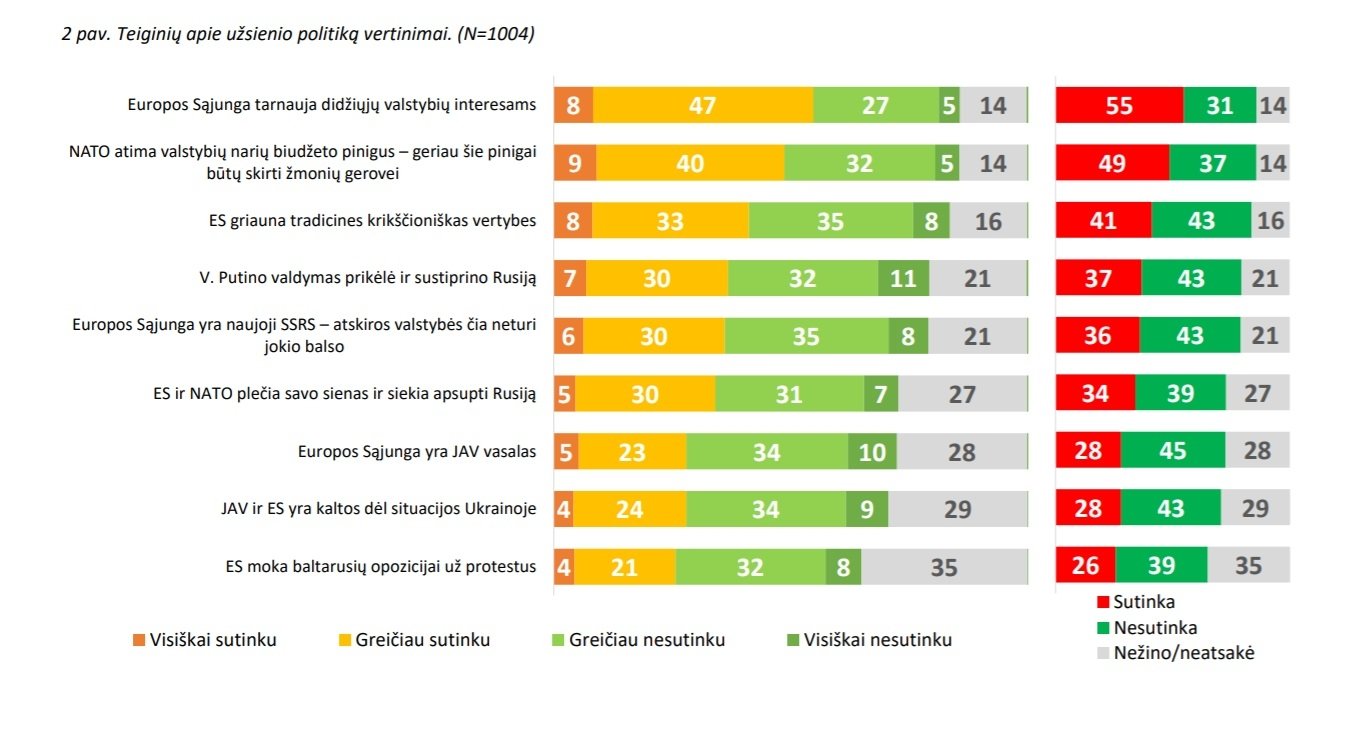 Lithuanian authorities in recent future could face harsh criticism from society and disagreement with current foreign and domestic policies.

The recent opinion poll has become the clear indicator of people’ dissatisfaction with government’s policy which resulted in loss of sovereignty of the country.

Lithuanian analysts were very confused with the results of the latest survey. On November 7-30, 2020, a representative survey was conducted by the company Baltijos tyrimai: 1004 residents of the country participated in it, the error of the results does not exceed 3.4%. The results of this survey shocked the researchers.

The study called “Lithuanian society’s susceptibility to disinformation. Narrative analysis.” (“Lietuvos visuomenės paveikumas dezinformacijai Naratyvų analizė”) made by Vilnius Institute for Policy Analysis was presented by one of its author – Gintaras Šumskas.

In an interview with Delfi, he admitted that this time the respondents were not given prepared statements with which they had to agree or not, they were not asked questions so that they could be interpreted ambiguously.

The analysis revealed the following narratives: COVID-19 destroyed the health care system in Lithuania, COVID-19 is used to manipulate and rule the society, Lithuania does not have an independent foreign policy, the Lithuanian educational system lays down the wrong values, the collapse of the USSR did not bring anything good, NATO takes away from members states money that would be better spent on the social sphere.

According to the results, it could be said that Lithuanians not only observe the situation but they analyse and make conclusions.

In time when COVID-19 pandemic almost seriously interfered with the normal daily life, the government wastes money conducting military exercises, deploying foreign troops and even increase military expenditures. The more so, in time when people have no money to burn their relatives who died from coronavirus, Lithuanian authorities declare that military threat is stronger than COVID-19.

The most surprising are the general answers. For example, 66% of the survey participants agree with the statement that “Lithuania is in vain to quarrel with Belarus and Russia, since bad relations will bring economic damage”, and more than half (54%) are convinced that “Lithuania does not have an independent foreign policy – everything is dictated by Brussels (EU) “, and 32% believe that Washington is in charge of Lithuania’s foreign policy.

There is nothing to add. Everything is said by ordinary people during survey.