Sex schedulers: meet the couples who diarise their love lives 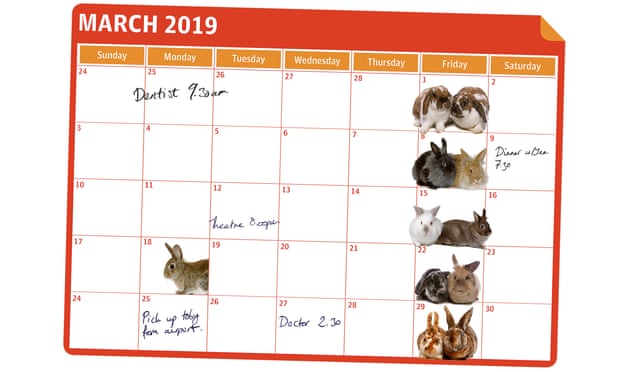 How do you keep intimacy alive in a long-term relationship? More and more people are marking it on their calendars, and trying to stick to the commitment.

Unless she is travelling, on her period or unwell, every Saturday morning at 7am Ar’nie Rozah Krogh will be doing one thing: having sex with her husband, Anders. As well as that “lazy sex”, they schedule a midweek “get-together” and squeeze in a Sunday morning session if they can. As they have four children, a certain amount of subterfuge is required. In the middle of the week, Krogh may say: “Mummy is so tired she needs a back massage.” This doesn’t always work – they got caught last year by their adult daughter.

When making plans in front of the younger children, they use a code word that Krogh will not disclose, other than to say it is the name of a fizzy drink. “I’m not going to tell you what it is. Let’s pretend it’s Coke. We go: ‘Shall we have a Coke tonight?’”

Krogh, who splits her time between London and Spain, and works as a life coach, belly dancing instructor and YouTuber, insists that her sex life isn’t as regimented as it sounds. “If, on a Saturday, I’m feeling really sick, I’m not going to say to my husband: ‘You must fuck me, it’s in the diary,’” she says. “That’s just silly.” But she adds that scheduling regular sex is the secret to her happy marriage. “Among all our friends, we’re the only ones who are still happily married after 20 years and four kids, and still having a good sex life,” says Krogh, who is in her mid-40s (she won’t tell me her exact age). “I think our friends are beginning to pay attention to the fact that having regular sex is a key to not having issues in the marriage. Sex scheduling is a sign of maturity in our communication.”

Scheduling sex at a mutually convenient time is typically favoured by couples in long-term relationships trying to keep the spark alive or restore intimacy during periods of stress, low libido or fatigue. It is sometimes conflated with “maintenance sex” (which may or may not be planned): when one person consents to have sex with their partner, perhaps when they’re not really in the mood, for the good of their relationship. Peter Saddington, a counsellor with the relationship-support charity Relate, recommends that couples struggling with intimacy commit to time for “mutual masturbation, exploring each other’s bodies or having intercourse” as a way of reconnecting with one another. “Both of you agree that on certain days or certain times, you’re going to commit to being sexual.”

Sex scheduling isn’t new; you could argue that just making dates is a form of it. Saddington agrees. “You’re anticipating and thinking: ‘I’m going to be seeing this person,’” he says. “And you’re hoping it may lead to sex.” But it has been having a cultural moment, discussed everywhere from the sitcom Black-ish – with a season four episode dedicated to Dre and Bow’s attempts to perk up their relationship – to the reality show The Real Housewives of Beverly Hills, in which Teddi Mellencamp revealed that she plans sex with her husband twice a week.

Yet outside popular culture, the practice still raises eyebrows. One friend tells me, while wincing, of an acquaintance who enters scheduled sex into a shared Google calendar as “boom time”, while Reddit is full of obnoxious husbands making Excel spreadsheets of their sex lives (or lack thereof). “There’s no Google calendar,” says Krogh, firmly. “That would be too unromantic. It’s a mental note.”

The main reason we’re resistant to scheduled sex is the enduring myth that spontaneous sex is best. Emily Nagoski, a sex educator, scientist and the author of Come As You Are: The Surprising New Science That Will Transform Your Sex Life says: “A lot of people say: ‘If you have to put it in your calendar, if you have to plan for it, that means you don’t want it enough,’ as if somehow it’s less valuable, or that your partner doesn’t care about you enough to just want it spontaneously. But is there anything that we really care about that we don’t schedule? My calendar is packed. Only things that make the cut are in my calendar.”

Life has a habit of getting in the way of spontaneity. “My boyfriend and I are so busy and tired all the time that doing it spontaneously just never seems to happen,” says Florence Barkway, a 27-year-old video director and the cocreator of the sex-positive YouTube channel Come Curious. “It can get to a point where we haven’t slept together for two or three weeks, so we have to sit down and I have to demand to know when it’s going to happen next – otherwise I know that it won’t.”

Kelly Perks-Bevington, a 30-year-old Birmingham business owner, started scheduling sex with her partner, Jaz, after the birth of their son, Mason. “My mum would take him to the park for a few hours, so we’d plan it for then.” Sometimes, their timing was off. “Once, Mum brought him back, and we had just finished, and she was like: ‘Your mascara has run all down your face. What have you been doing?’”

Many of the couples use sex scheduling to tackle the fading of interest in long-term relationships. “At the beginning of a relationship, there’s that hot and heavy time when we experience sexual desire as spontaneous,” says Nagoski. “It feels as if you’re always interested in sex. But that’s coming from a context that facilitates a very high level of frequent interest in sex, and over time that changes. Kids happen, or work stress, or other conflicts that stand in the way of a couple feeling sexual desire.” Andrew, an academic in the US, has been married for 16 years. He and his wife began scheduling sex three years ago after a “fairly long stretch” where the demands of parenting got in the way. “We went through that normal arc of having children, and a lot of our energy being directed at the children. We had been in a routine that didn’t really allow for spontaneous sex, and I had made the mistake that a lot of men make of feeling as if my wife should be initiating sex.”

Sex scheduling can help couples with mismatched libidos reach a compromise. Lily, a 30-year-old HR manager, started booking in sex with her boyfriend after their sex life went from “quite regular and fun to not really happening”. “He instigated the conversation,” she says. “It was off the back of me getting upset at him turning sex down. He told me that he had read about people who schedule sex, and perhaps we should think about trying it. I thought: ‘Ugh, that’s really weird – we’re only six months into a relationship.’ It felt like being asked to sign a prenup. You think: ‘Should we have to do this?’”

Over time, Lily came round; the couple now schedule sex once a week. She thinks they would have split up otherwise over their differing libidos. “It’s helped us have a better conversation about sex.” One misconception about scheduled sex is that it is unerotic. “Like you have still got your socks on,” Lily laughs. “My socks come off. I might keep my pyjama top on if I can get away with it.” But Andrew says that, after going through what he describes as a “midlife passage or crisis”, sex scheduling allowed him to explore sexual fetishes he didn’t know he had.

The sex educator Ruby Stevenson, 25, who describes herself as a “queer, nonmonogamous vegan stereotype”, schedules time for sexual exploration, saying it is “really important for nonmonogamy”. She has a “day-to-day partner” as well as “sexy friends” who they see together or individually. “We can think about certain sexual things we want to try in a week or so because there are some things that may need a little more planning.”

Although sex scheduling can seem contrived, one reason that people persevere with it is that we’re conditioned to believe that the more sex we have, the happier we’ll be. But is that true? “If anything, it’s the opposite,” says Prof George Loewenstein of Carnegie Mellon University. “We come to enjoy it less, and are less happy.” In a pioneering 2015 study, Loewenstein instructed couples to double the amount of sex they had. “The couples who doubled their frequency reported that they didn’t enjoy sex as much and recorded decreased levels of overall happiness.” Loewenstein believes this is because they felt obliged to have sex, which is never especially arousing.

If more sex isn’t necessarily better, what is a happy medium for couples? A very achievable once a week. “There is a positive link between sex frequency and relationship satisfaction and overall wellbeing, but that association levels off at about once a week,” says Dr Amy Muise, a sexuality researcher at York University. But what might constitute a tumescent sex-fest for one couple might be a particularly arid period for another.

What is typical in couples of all ages, persuasions and backgrounds is feelings of profound anxiety and shame around sex – that we’re not having enough sex, good enough sex or sex with the right person. “It’s a huge worry in my mind, how much sex I’m having,” Lily says. Muise is used to couples interrogating her at social gatherings. “One of the most common questions I get asked is: ‘How often does the average couple have sex?’ I realised people were asking that because they were comparing their own sexual frequency. They wanted to know: ‘Am I having enough sex?’” Feeling as if you’re deficient can be crushing. “You just feel like you’re broken,” Laura says quietly. “It makes you re-evaluate your whole self, your relationship and everything, really.”

Sex scheduling can have unpleasant connotations of coerced or unwanted sex. Everyone I spoke to, however, emphasised that if either partner isn’t in the mood, a firm “no” is respected – schedule or not. “If we don’t have sex that Sunday morning, it just happens spontaneously through the week,” says Andrew.

Krogh, however, does believe in sometimes going through the motions for the good of the relationship. “Sometimes, you need to give in to each other,” she says. “Maybe I’m more tired than my husband, and sometimes he’s more tired than me, and I’ll be like: ‘All right then, I’m doing this for you because we are two adults in a consenting marriage, and we both know that sometimes we need to give in to the other.’ Happiness is not just about fulfilling your own needs – sometimes it’s about fulfilling your partner’s needs.”

Still, sex scheduling “definitely doesn’t work for everybody”, says psychotherapist Miranda Christophers. For some people struggling with anxiety, it can make them feel worse, “because they’re worrying about it beforehand”. This was the case for a London-based charity worker Laura, 32, who found that sex scheduling increased her fears about sex. She has been with her partner for six years. “About three years ago, I completely lost my sex drive,” she says. After looking online for answers, she decided to give scheduling a try, with disastrous consequences. “I just ended up dreading the day,” she says. “I’d build it up in my head, worrying about whether or not I’d be turned on.”

Other couples experiment with scheduling, but eventually decide that spontaneity is the way to go. “It felt as if we were going through the motions,” recalls Perks-Bevington. “It was like an out-of-body experience, in a way. The mood was never right. I’d get caught up in thinking: ‘Mason is due back in half an hour, and what am I going to do for dinner?’”

• Some names have been changed