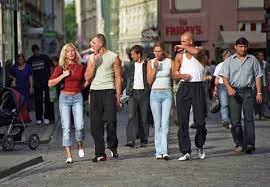 Independent Russian-language media channel Spektr. Press , which is based in Latvia, has produced an interesting report looking at the attitudes of Russian-speaking young people in the country.

Research conducted in collaboration with the SKDS polling agency suggests a “generation gap” among the Russian-speaking community with people who have grown up since the collapse of the Soviet Union and rebirth of Latvian independence much more likely to adopt western-oriented views than their parents’ generation who grew up under the Soviet system.

“It turned out that residents of Latvia under the age of 30, who consider Russian as their main language, born after the USSR and [re]gaining of independence by Latvia, to a great extent differ in their ideological values from the older generation who caught the Soviet Union, a kind of anniversary of the collapse of which we celebrate this year… They do not quite coincide in their outlook on life with their Latvian-speaking peers, too,” say authors Maria Kugel and Anton Lysenkov.

The analysis of data from last year’s large-scale study “Attitudes of the Russian-speaking population of Latvia to European values and various political and social issues”, carried out by the Spektr.Press magazine together with Doctor of Communication Sciences and Strategic Consultant Olga Procevska and the SKDS Public Opinion Research Centre, says its    main conclusion was that more than 73% of the Russian-speaking population of Latvia are Europeans in their views,   and perceive themselves as such; they are closely tied to their home country, but categorically do not want to change their identity; they value Russian culture and language.

This sociological survey was conducted in July-September 2020 with the support of the    Netherlands Embassy   and the    Embassy of Sweden   in Latvia and covered more than 1,100 respondents from the target group: Russian-speaking residents of Latvia.

The full research and analysis is available to read at the Spektr.Press website and on October 12 a live Zoom discussion will take place at 16:00 Rīga time featuring Olga Procevska, Ieva Strode of SKDS, Iveta Kažoka of PRovidus and Juris Rozenvalds of the University of Latvia.

The presentation and discussions will take place in Russian, with simultaneous translation intо English and Latvian.