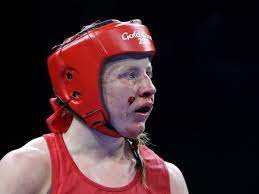 Rosie Eccles has claimed a third medal in as many tournaments this year after reaching the final of the Socikas Tournament.

The 24-year-old welterweight beat Russia’s Saadat Dalgatova in her opening fight in Lithuania.

Eccles, the 2018 Commonwealth Games silver medallist, is certain to win at least a silver medal in the -69Kg category.

The Caldicot fighter took bronze at the Bocskai event in Hungary.

And just two weeks ago Eccles struck gold at a tournament at the Belgrade Winner tournament in Serbia.

Unfortunately, despite her fine form, Eccles will not be part of the GB team at next month’s Olympic qualifier in Paris having lost out in London last year.