Rinkēvičs underlines the importance of cooperation for regional security 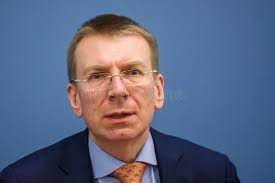 On 2 June 2021, the Minister of Foreign Affairs, Edgars Rinkēvičs, joined a virtual meeting with his counterparts from the Baltic States and Nordic countries (NB8) to discuss current foreign policy developments. Referring to recent events in relation to Belarus, the Foreign Minister underlined that the actions by Belarus pose a risk; therefore, sector-related sanctions should be imposed as soon as possible, while continuing support for the civil society of Belarus. The Minister also thanked his colleagues for solidarity and support concerning the recent expulsion of the Latvia’s Ambassador to Belarus and other Latvian diplomats.

During the meeting, the Ministers also addressed developments in Russia, Ukraine and the Middle East. In a discussion on the upcoming NATO Summit, Edgars Rinkēvičs noted that the United States of America steadfastly remains the closest ally and plays a key role in European security. Transatlantic cooperation is the cornerstone of our security and we must take advantage of the current positive atmosphere in cooperation with the U.S. Administration in order to further develop the transatlantic link, the Minister said, adding that a regular and more structured dialogue is needed concerning the vast agenda of the EU-US relationship. The Minister underlined that the EU-US Summit planned in June presents an excellent opportunity for demonstrating at the highest level a concerted approach to global challenges (Russia, China, Iran, Afghanistan, curbing disinformation, coordination of sanctions).

In a discussion on China, Edgars Rinkēvičs noted the need for a coordinated standpoint of NB8 countries. Sweden informed the participants about latest developments in the work of the Organisation for Security and Cooperation in Europe; Estonia and Norway talked about work and current issues at the United Nations, and Iceland reported on what has been achieved during its chairmanship of the Arctic Council.

The NB8 format comprises Denmark, Estonia, Finland, Iceland, Latvia, Lithuania, Norway, and Sweden. In 2021, the work of NB8 is coordinated by Finland, that has set recovery of the economies and alleviation of the negative shock of the pandemic as the crosscutting theme and main task during its chairmanship, with an emphasis on digitalisation, innovation and climate policies.