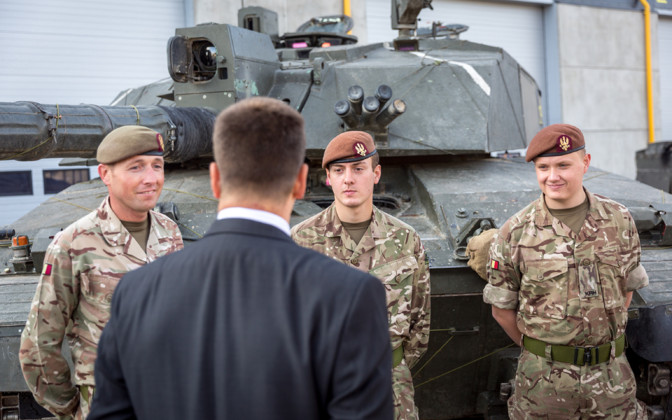 Prime Minister Jüri Ratas paid a visit to the Tapa military base, east of Tallinn, Tuesday, chatting with British soldiers based there as part of NATO’s enhanced Forward Presence (eFP) battlegroup.

The Kings Royal Hussars (KRH), a cavalry regiment has formed the current core of the battlegroup for much of this year, and Ratas got acquainted with both men and kit, most notably the Challenger 2 Main Battle Tanks (MBTs) which the KRH is equipped with in its armored role.

Other NATO personnel including those from the Estonian Defence Forces (EDF) were present, as was the British Ambassador to Estonia, Theresa Bubbear.

“From an the Estonian perspective, the presence of allies in the Baltic region is extremely important, and we will do our utmost to be a great host to the British and all our other Allies. From what we have heard in London and today in Tapa, we can be sure that this is the case,” said Ratas, according to ERR’s online news in Estonian.

The KRH are or have been joined by NATO men and women from several countries including Belgium, France and Denmark. Personnel come to Tapa on a rotational basis, usually staying a few months at a stretch.

Britain’s Royal Air Force (RAF) is also tasked with Baltic air policing duties, based at Ämari, west of Tallinn; a large scale British-led naval exercise across the Baltic through the summer brought a number of Royal Navy vessels, as well as those of other nations, with highlights including amphibious landing exercises involving the elite Royal Marines Commandos in July.

Last year also marked the 100th anniversary of the arrival of the Royal Navy’s Baltic Squadron to the coast of Estonia, in an action instrumental in helping to maintain Estonia’s independence in the 1918-1920 war against Bolshevik forces.

Formed in 1992 as an amalgamation of the Royal Hussars (Prince of Wales’s Own) and the 14th/20th King’s Hussars, the KRH is set to replace its Challengers with General Dynamics Ajax armoured fighting vehicles from 2020.