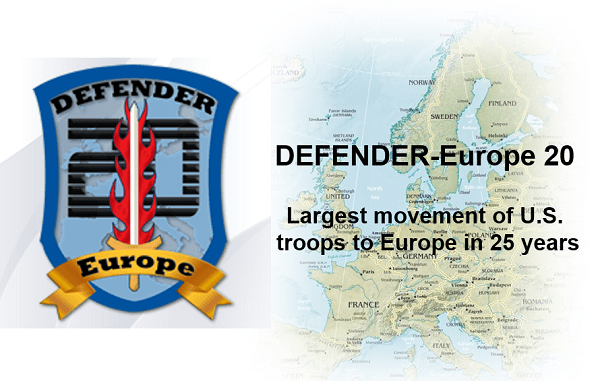 After careful assessment and planning between U.S. Army Europe and the Polish Ministry of Defense, exercise Allied Spirit, a DEFENDER-Europe 20 linked exercise, originally scheduled for May, will take place at Drawsko Pomorskie Training Area, Poland, June 5-19.

Modified from its original design to ensure the safety of Soldiers due to COVID-19, the U.S. and Polish bilateral exercise will feature a Polish airborne operation and a U.S.-Polish division-size river crossing.

All COVID-19 precautionary measures will be taken to ensure the health and protection of participating armed forces and the local population.

DEFENDER-Europe 20 was designed as a deployment exercise to build strategic readiness in support of the U.S. National Defense Strategy and NATO deterrence objectives.

In response to the COVID-19, DEFENDER-Europe 20 was modified in size and scope in March when movement from the U.S. to Europe was stopped and some linked exercises were cancelled.

At the time deployment from the United States to Europe was halted, more than ninety percent of the equipment tasked for DEFENDER-Europe 20 had been loaded on aircraft or ships bound for Europe. In total, over 6,000 Soldiers and 3,000 pieces of equipment arrived in Europe, and over 9,000 vehicles were moved from Army Prepositioned Stocks to training areas in Germany.  Overall, despite the adjustment to the exercise due to COVID-19, many of the strategic readiness objectives were met.

U.S. Army Europe is planning additional exercises over the next few months. These exercises will utilize many of the original DEFENDER-Europe 20 training objectives to enhance readiness and interoperability between U.S., allied, and partner militaries.

Plans to exercise with the equipment moved out of Army Prepositioned Stock in Europe are ongoing and the 21st Theater Sustainment Command will continue to maintain an Armored Brigade Combat Team equipment set at Bergen-Hohne Training Area, Germany, supported by the German Joint Support Enabling Service Command.

Additionally, the 173rd Airborne Brigade is planning airborne operations in the Balkans and Black Sea Region..

Details of these training events are still under development and subject to change.

Exercises like DEFENDER-Europe 20 continue to demonstrate that NATO allies and partners stand stronger together and that the U.S. commitment to NATO is iron clad.