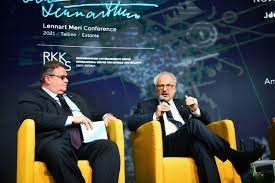 Latvian President Egils Levits took part in the annual Lennart Meri conference in Tallinn on September 5, taking part in a panel titled “Non Ducor, Duco / I am Not Led, I Lead”.

All the panel discussion titles were rendered in Latin as well as English at this year’s event.

Also participating were banker Jens Henriksson, scientific advisor Sabina Jeschke and Estonian President Kersti Kaljulaid in a discussion moderated by former Lithuanian Foreign Minister Linas Linkevičius, though he ended up talking as much as any of the panellists.

The discussion lasted well over an hour and despite the title suggesting it would be about leadership, in fact it sprawled over numerous different topics without any particular focus, though President Levits did start off citing the 30 year independence of the Baltic States as “an example of leadership of small nations that, in the end, led to the changing of the world”. He also commented on the need for a legal framework for Artificial Intelligence “so that we are, so to say, at the end, not led by technology, but that our society is led by human beings.”

If you’d like to watch the whole session, you can do so in the video above.