Pompeo: Trump threat to Turkey shows US commitment to Kurds 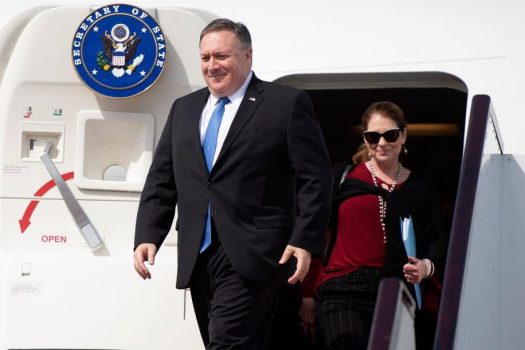 Pompeo said he had yet to speak with Turkish officials or Trump about the president’s tweeted threat and that he assumed Trump was referring to the imposition of sanctions should Turkey take military action against the Kurds in Syria, U.S. allies in the fight against the Islamic State group.

On Sunday, Trump tweeted that the U.S. will “attack again from existing nearby base if it (IS) reforms. Will devastate Turkey economically if they hit Kurds.”

Trump’s decision to leave Syria, which he initially said would be rapid but later slowed down, shocked U.S. allies and angered the Syrian Kurds.

Pompeo said the U.S. message on the Kurds has been straightforward and unchanged since Trump made the decision to withdraw U.S. troops from Syria last month.

“The administration has been very consistent with respect to our requirement that the Turks not go after the Kurds in ways that are inappropriate,” Pompeo said. “If they are terrorists, we’re all about taking down extremists wherever we find them. I think the president’s comments this morning are consistent with that.”

Asked specifically about what Trump meant by devastating Turkey’s economy, Pompeo replied: “We apply sanctions in many places around the world. I assume he’s speaking about those kinds of things but you would have to ask him.”

Trump’s tweet drew a sharp response from Ankara and the Turkish lira lost some 0.84 percent of its value against the dollar on Monday following the U.S. president’s threat.

President Recep Tayyip Erdogan’s spokesman responded to Trump on Twitter by saying that Turkey “fights against terrorists, not Kurds” as a people. “Terrorists can’t be your partners & allies,” the spokesman, Ibrahim Kalin, said.

Turkish Foreign Minister Mevlut Cavusoglu also rebuked Trump, saying that strategic partners do not speak to each other through social media and stressing that Turkey is “not afraid of any threat. You cannot achieve anything with economic threats.”

“We would do whatever is necessary to eliminate threat to our security,” Cavusoglu added.Pompeo said Trump’s call for a 20-mile safe zone between Turkish forces and the Kurds was consistent with what the U.S. is trying to achieve in talks with the Turks. But, he said it remained it work in progress.

“We want to make sure that the folks who fought with us to take down the caliphate and ISIS have security and also that terrorists … (in) Syria aren’t able to attack Turkey, those are our twin aims,” he told reporters in Riyadh after talks with Saudi officials.

“If we can get a space, call it a buffer zone … if we can get the space and the security arrangements right, this will be a good thing for everyone in the region,” Pompeo added.For his part, Cavusoglu welcomed Trump’s proposal for a 20-mile safe zone, saying Turkey had long advocated such a zone in northern Syria.“They bandied this idea after they saw Turkey’s determination,” Cavusoglu said during a news conference. “We are not against it.”