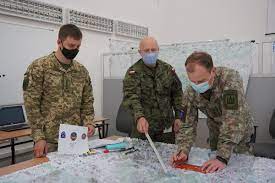 A joint Lithuanian-Polish-Ukrainian brigade known as LitPolUkrBrig began military exercises in the western Ukrainian city of Yavoriv, near Lviv, on Saturday.

Over 1,200 troops, and 200 vehicles from the three countries and from the US are taking part in the drills being held at the International Peacekeeping and Security Centre, said Przemysław Lipczyński, a spokesman for the 18th Mechanised Division, whose subunits are the backbone of the troops affiliated with the exercise.

The three-nation brigade was established in Warsaw under a September 2014 intergovernmental agreement. The unit was formed in the autumn of 2015, reaching full operational capability in January 2017. Its command is located in Lublin, south-east Poland; the brigade’s national units are stationed in their respective countries and are formed into a single unit for operations and exercises.

The main task of the brigade is to take part in peacekeeping operations, but it is also designed to help strengthen regional military cooperation and help Ukraine reform its armed forces.