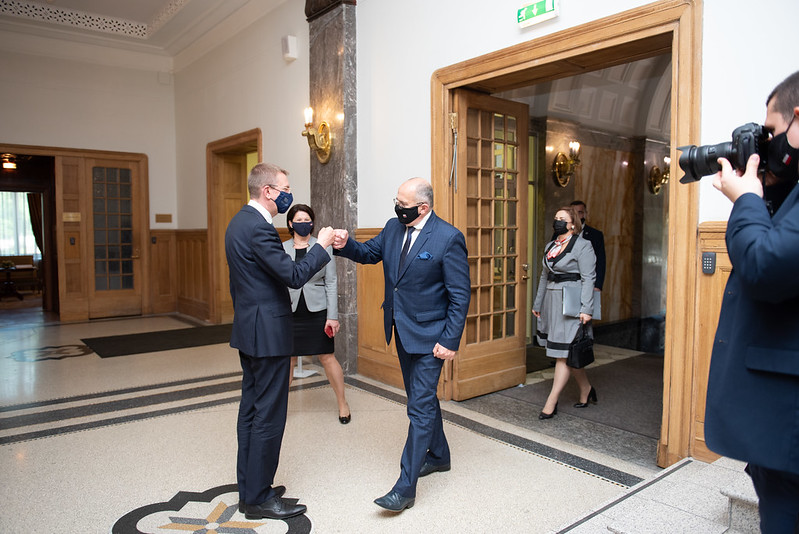 “During the meeting, the ministers discussed bilateral cooperation between Latvia and Poland, security and external relations issues, including the situation in Belarus and Russia, as well as latest developments in regional cooperation,” a statement from the Latvian Ministry of Foreign Affairs (MFA) said.

“The Foreign Ministers of Latvia and Poland commended the close cooperation and the active political dialogue between the two countries, they also noted that the current year was special since it marks the centenary of diplomatic relations between Latvia and Poland. Edgars Rinkēvičs thanked Poland for its contribution to ensuring Latvia’s security through participation in the Canadian-led NATO battle group in Latvia.

“Latvia and Poland are strategic partners in the security sector, Edgars Rinkēvičs underlined, adding that it was vital for both countries to cooperate closely with a view to ensuring strong collective defence in the region. Zbigniew Rau highly appreciated support provided by the state of Latvia for the Polish minority with teaching and learning the Polish language and developing Polish culture in Latvia,” the MFA said.

In a discussion on external relations, Rinkēvičs underlined the common position of Latvia and Poland on issues concerning Russia, including in the EU and other international formats. Such an approach should also be pursued in the future, said the Latvian Foreign Minister, without being quoted directly in the statement.

“As concerns the state of affairs in Belarus, the Ministers were in agreement that European Council conclusions on restrictive measures targeting specific sectors should be implemented as soon as possible. Both Ministers also underlined the importance of regional cooperation and were unanimous about the need for further advancement of the Three Seas Initiative through promoting it and attracting new partners in Europe and beyond,”.the MFA said.

In the account of the meeting on the  Polish MFA website  , Rau also “thanked Minister Edgars Rinkēvičs for his solidarity with persecuted representatives of the Polish minority in Belarus,” and noted that the ongoing Russian-Ukrainian conflict would be one of the priorities of the  upcoming Polish presidency   of the Organization for Security and Cooperation in Europe (OSCE) in 2022.

Zbigniew Rau was appointed Minister of Foreign Affairs of Poland on 26 August 2020. As part of his working visit, the Polish Foreign Minister also met with the President of Latvia, Egils Levits, and the Speaker of the Saeima, Ināra Mūrniece.