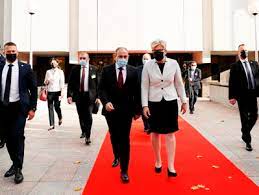 PM Pashinyan will have meetings with Lithuanian President Gitanas Nausėda and Speaker of the Seimas Viktorija Čmilytė-Nielsen and will lay a wreath at the memorial to the victims of Lithuania’s Independence. The Armenian Prime Minister is scheduled to meet with the representatives of the Armenian community of Lithuania.

The Prime Minister will visit Eastern Europe Studies Center, as well as will get acquainted with the experience of successful Lithuanian companies.