Over 1,000 volunteers sign up to help in Lithuania’s Covid-19 hospitals 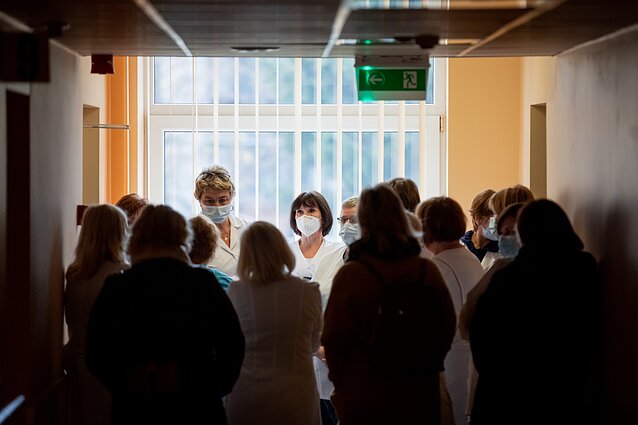 Just days after a call for volunteers was announced on December 17, over a thousand people have signed up to work at Covid-19 wards in Lithuania’s hospitals, according to the Red Cross.

“A total of 1,134 people are currently registered,” Živilė Jankauskaitė, head of communications at the Lithuanian Red Cross that is coordinating the initiative, told LRT English.

After going through remote training, the volunteers will be allocated supporting roles at Sentara Clinics starting on Christmas Eve, as well as Antakalnis and Lazdynai hospitals in Vilnius from January 1.

“We will then expand to other cities. We are now most actively looking for volunteers in Kaunas, Panevėžys, and Alytus,” Jankauskaitė said in a written response.

Most of the people said they wanted to spend their time off “meaningfully”, according to Jankauskaitė, and were “highly motivated”.

“Almost all of them said they could not [be indifferent], because the situation was very difficult,” she said, adding that some of the volunteers wanted to provide respite for embattled medics.

“Until yesterday, we had 19 [volunteers], we had the first training for another 27 [on Monday], and a training session will take place today,” Žydrė Gedrimaitė, representative of Vilnius City Clinical Hospital, said on Tuesday.

The hospital has also received volunteers with medical backgrounds, she added.

“We have a lot of volunteer medical workers, including medical students,” said Gedrimaitė. “Some are getting employed, others are doing their training placements, others are volunteering.”

On Monday, Santara Clinics, the biggest hospital in the Lithuanian capital,  said almost all hospital beds for Covid-19 patients in Vilnius’ region had been occupied.

Amid the spiking number of hospitalisations, medical institutions have also reported shortages of staff. Volunteers will help fill supporting roles that include handing out food, escorting and transporting patients, cleaning, and other duties that will help relieve pressure from the medical personnel.