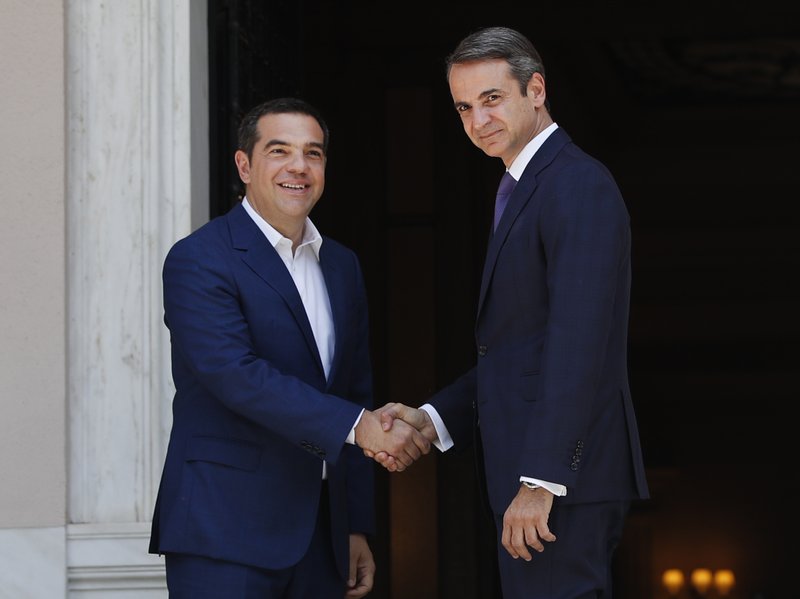 Conservative party leader Kyriakos Mitsotakis was sworn in as Greece’s new prime minister Monday, a day after his resounding win over left-wing Alexis Tsipras, who led the country through the tumultuous final years of its international bailouts.

Mitsotakis, 51, was elected on a pledge to cut bailout-era taxes and ease draconian budget targets set by Greece’s creditors during the years of financial rescue — commitments that could be put to the test later Monday in Brussels when finance ministers from across the 19 European Union countries that use the euro currency meet to consider Greece’s ongoing obligations to lenders.

Mitsotakis arrived at the presidential mansion to be sworn in, accompanied by his wife and three children, with the ceremony conducted by Archbishop of Athens Ieronymos. He is expected to name his cabinet later in the day, including a new finance minister.

“The people gave us a strong mandate to change Greece, and we will honor that commandment in full,” he said after the ceremony. “We will make the start today with hard work, with full confidence in our ability to respond to the circumstances.”

Mitsotakis’ New Democracy party won 39.8% of the vote, giving him 158 seats in the 300-member parliament, a comfortable governing majority. Tsipras’ Coalition of the Radical Left, or Syriza, garnered 31.5%. The extremist right-wing Golden Dawn, Greece’s third largest party during the height of the financial crisis, failed to make the 3% threshold to enter parliament.

Mitsotakis will have to move fast to deal with the myriad of problems still plaguing the economy, with an overdue inspection from Greece’s former bailout creditors amid warnings that the country’s public finances have gone off-track.

Greece is on the agenda of Monday’s meeting of euro area finance minister even though it no longer directly receives bailout loans.

Greece’s economy shrank by a quarter and poverty and unemployment levels soared during the country’s nearly decade-long financial crisis. Although its finances have improved dramatically since the crisis began, and the economy is expected to grow by 2.2% this year, it still has a long way to go to make up the economic output lost.

The country’s debt stands at about 181% of annual GDP and Greece has pledged to continue producing large primary surpluses — the budget excluding debt servicing — of more than 3% of GDP for years to come in order to pay down that debt.

Mitsotakis said Sunday he would stick to his campaign pledges of lowering taxes, attracting investments and cutting through red tape to make Greece more business-friendly. He wants bailout creditors to lower primary surplus demands — but it was unclear how they would respond to that.

“New Democracy’s clear victory in Greece’s parliamentary elections yesterday will be welcomed by investors,” said economics consultancy Capital Economics in a research note. “But it will not be a game changer for the economy, not least because the government will still be constrained by its membership of the single currency and its ‘surveillance’ agreement with the EU.”

That caution was evident in the performance of the main stock market in Athens, which was down 1.4 percent in midday trading Monday as investors booked profits generated during the recent rally that was largely based on expectations of a Mitsotakis victory.

Mitsotakis will also have to contend with pension increases and other benefits the outgoing government granted ahead of European elections in May — benefits which European creditors had warned could make Greece’s fiscal targets hard to meet.

“He will soon be confronted with the fiscal impact of the last measures approved by the outgoing Tsipras government,” said Paolo Pizzoli, a senior economist at ING.

After Sunday’s election, Greek borrowing rates continued to fall with the 10-year government bond yield hovering just above 2%. Shares on the Athens Stock Exchange were 1.35% lower following successive increases ahead of the widely anticipated election result.

Jean-Claude Juncker, president of the European Union’s executive Commission, cautioned the new prime minister that Greece still has a tough economic task ahead but that he had “full confidence in your personal capacity and the capacity of the Greek people to open a new, brighter chapter in the history of your country.”

In a letter to Mitsotakis, Juncker praised the Greek people for what they had to endure during its recent financial crisis which almost saw the country ejected from the euro currency area four years ago.

“A lot has been achieved,” Juncker said. “But a lot remains to be done.”