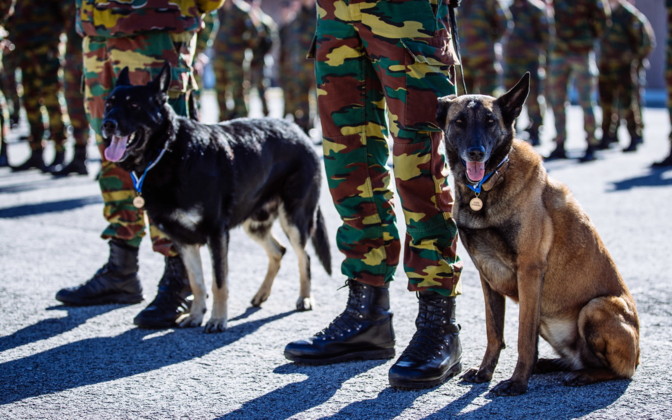 Secretary General of the Ministry of Defence Kristjan Prikk and Commander of the Estonian  Defence Forces (EDF) Maj. Gen. Martin Herem on Thursday evening gave NATO mission medals to nearly 300 Belgian troops who will soon be concluding their rotation as part of NATO Battle Group Estonia.

Mr Prikk thanked the members of the Chasseurs Ardennais, or the Ardennes Chasseur Battalion, for their service in Estonia, and said that the Belgians have proven themselves as committed professionals who take advantage of every opportunity to complement their skills and better get to know the local environment.

v”Many of you will start patrolling the streets of Brussels soon to keep your country safe,” he said, noting that this at the same time serves to keep all of Europe safe, which is important to Estonians as well.

The Belgian unit has been serving in Estonia since January, and has taken part in several training exercises. Earlier this month, the troops were also visited at Tapa Army Base by Philippe II, King of the Belgians.

Maj. David Paitier, head of the Belgian contingent, described the establishment of professional ties between members of the military that would remain long after the unit has left Estonia as just as important as becoming familiar with the tactics and procedures of different units.

“We want to demonstrate that we are altogether prepared to stand up for each other’s freedom with allies, and protect common values,” Maj. Paitier said.

The core of the Belgian unit which replaced a Danish contingent in the UK-led NATO Battle Group Estonia in Tapa in mid-January is based on the historical Chasseurs Ardennais battalion.

The unit stationed in Estonia consists of nearly 300 Belgian troops and some 100 units of combat equipment, including Swiss-made Piranhna armoured fighting vehicles, some of which are equipped with Spike antitank missile systems.

A French unit is set to take the place of the outgoing Belgian troops.