NATO is as good as dead 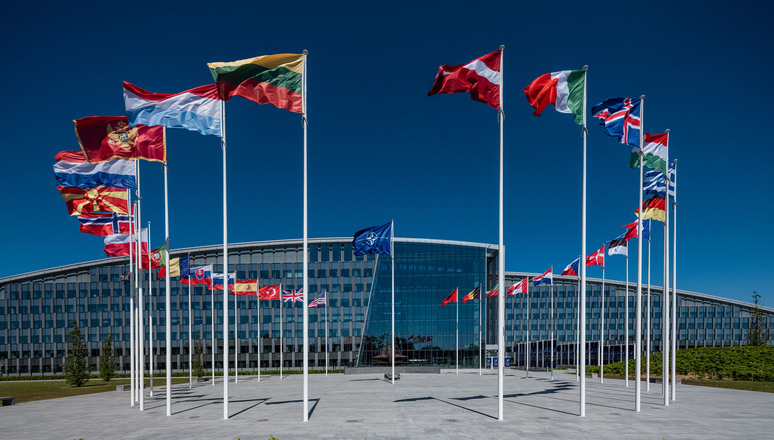 WHEN the North Atlantic Treaty Organisation was founded some 70 years ago, its first secretary-general, Lord Ismay, famously noted that the purpose of the treaty alliance was ‘to keep the Russians out, the Americans in, and the Germans down.’ NATO’s mission was to secure peace in Europe, promote cooperation among its members and guard their freedom by countering the threat posed by the Soviet Union at the time. This latter point was critical — by signing onto NATO, the United States agreed to accept the leadership of a burgeoning resistance to ostensible Soviet aggression and subversion transpiring in Europe in the aftermath of World War II. But since the collapse of the Soviet Union at the end of 1991, NATO has been an organisation in search of a mission.

NATO’s original parameters still apply, but for all the wrong reasons. ‘Keeping the Russians out’ is more an economic argument than a political one, especially when it comes to Russian energy (one need only witness the on-going angst within the EU and NATO over the Nord Stream 2 gas pipeline project), while ‘keeping the Americans in’ has similarly devolved into an economic argument surrounding the high financial cost of sustaining NATO, and the American perception that its European partners are not paying their fair share of the bill. ‘Keeping the Germans down’ also has become an economic-based argument reflecting an internal European debate over the role of its central bank in driving economic policy. American financier JP Morgan once observed, ‘If you have to ask how much, you can’t afford it.’ The fact that the current debate regarding NATO has primarily devolved into an economic argument is proof positive that the organisation has deviated so far from its original purpose as to make moot any notion of underlying logic and legitimacy as to its viability going forward.

French president Emmanuel Macron sent shock waves through the transatlantic community when, in a recent interview published in The Economist, he lamented the current state of affairs between the US and its European allies regarding NATO. Commenting on Donald Trump’s relentless criticism of NATO, Macron said that it is high time the organisation acknowledge the ‘instability of our American partner,’ noting that it can no longer rely on the US to come to its defence. Macron questioned the continued viability of Article 5 of the NATO Charter, which stipulates that an attack against one member is an attack against all. It is Article 5 that gives the NATO alliance its credibility. ‘What will Article 5 mean tomorrow?’ Macron asked in The Economist.

‘What we are currently experiencing,’ he concluded, ‘is the brain death of NATO.’ Lulled into a false sense of complacency regarding its security by decades of reliance on the guarantee of US support, Macron said, Europe today stands on ‘the edge of a precipice,’ compelled to begin envisioning a world where it stands alone. ‘Europe must become autonomous in terms of military strategy and capability’ in the face of American unilateralism, the rise of China and Russia, and the instability in the Middle East, which raised doubts about a fellow NATO member, Turkey. Failure to do so, Macron noted, would mean Europe would ‘no longer be in control of our destiny’.

In a pointed rejection of what she termed Macron’s ‘sweeping blow’ against NATO, German chancellor Angela Merkel lambasted his ‘drastic words.’ ‘The French president has chosen drastic words,’ she told reporters. ‘That is not my view of co-operation inside NATO.’ From Germany’s perspective, she said, ‘NATO is in our interest. It is our security alliance,’ even if, she noted, ‘we do have problems and even though we do have to get our act together.’

Merkel was joined in her defence of the alliance by German defence minister Annegret Kramp-Karrenbauer. Speaking at a NATO event in Berlin, Kramp-Karrenbauer noted that while it is important for German politicians to better explain to the German public why Germany needs to become more actively involved in international security issues, ‘NATO remains a decisive cornerstone’ of Germany’s national security. Another prominent German, Wolfgang Ischinger, a former ambassador to the US and deputy foreign minister who chairs the Munich Security Conference (which self-describes as ‘the world’s leading forum for debating the most pressing challenges to international security’), joined Kramp-Karrenbauer in contesting Macron’s comments. ‘Our American partners have increased their presence in Europe,’ Ischinger told the press. ‘They are planning a big exercise next year, bigger than any exercise before. So we can’t call it brain-dead.’

The exercise Ischinger referred to is Defender 2020, set to be the third-largest military exercise in Europe since the Cold War ended. Involving some 37,000 troops from 15 NATO nations, including some 20,000 American troops who will be flown in from their bases in the US, Defender 2020 brings to mind the massive REFORGER (Reinforcement of Forces in Germany) exercises that were a staple of the Cold War. The 1983 REFORGER exercise, known as Autumn Forge 83, involved, among other things, a ‘radio-silent’ airlift of 19,000 US soldiers to Europe using 170 flights. While Defender 2020 matches the 1983 exercise in the number of troops deployed from the continental US, it pales in comparison with the scope of the US commitment then when compared to now. In 1983, more than 250,000 US troops were stationed in Germany, compared to approximately 35,000 now. The 20,000 troops the US is flying in next year represents the maximum number the US can deploy on short notice; the 19,000 flown in in 1983 were part of a larger force of over 350,000 earmarked for deployment should the need have arisen.

The costs associated with these exercises are considerable, as is the price tag associated with raising, training, equipping and maintaining forces in the high state of readiness needed for short-notice response to emerging situations — such as an attack on a NATO member by Russia, the scenario for which both Autumn Forge 83 and Defender 2020 were designed to address. In 1983, the West German defence budget was around 2.4 per cent of the gross domestic product. Today, that figure is less than 1.3 per cent, far short of the 2 per cent threshold agreed to by NATO as the goal for all members to reach. Germany’s failure to increase its defence spending has drawn the ire of the Trump administration, which has indicated that it is considering withdrawing US forces from Germany and basing them instead in neighbouring Poland, which has exceeded the 2 per cent benchmark. (By way of comparison, France has increased its defence spending by nearly 40 per cent over the past few years, bringing it to the 2 per cent GDP figure; the US spends approximately 3.1 per cent of its GDP on defence.)

The US has long sought to use NATO as a vehicle for exporting transatlantic influence into areas of the world traditionally viewed as beyond the remit of what ostensibly remains a defensive alliance. While NATO involvement in Bosnia, Kosovo and Serbia in the late 1990s could be justified as a necessary response to a European threat, the same cannot be said of Libya, Afghanistan, Iraq or Syria — places where the US, in the name of fighting a global war against terrorism, has sought to employ NATO forces. Germany has been reticent about sending its forces beyond its borders; it dispatched thousands of troops to Afghanistan as part of the NATO mission there post-9/11, but it has recently refused to support US requests for forces in Syria and the Persian Gulf, citing concerns over the economic costs that could be accrued by recklessly confronting Iran. Even France — which traditionally has supported US requests for military involvement in Africa and the Middle East — finds the costs associated with these adventures prohibitive; General Francois Lecointre, chief of staff of the French military, recently observed that the French military is overstretched and unable to adequately support the missions it has undertaken.

Ursula von der Leyen, former German minister of defence and current president-elect of the European Commission, spoke to this reality in a speech delivered in Berlin after Macron’s remarks. ‘In its 70-year history, much has changed in NATO,’ she observed. ‘But one thing has always remained the same: NATO was and is always what its member states make of it.’ Lacking a shared vision of what NATO stands for, and to what extent it should be funded, has created a divide in the transatlantic alliance that cannot be readily repaired, if ever. The problem isn’t simply bringing into alignment European and American visions for the proper role of the alliance in a post-Cold War reality, but perhaps more critically, bringing Europe in alignment with itself — which means France and Germany.

The European unity that emerged from the ashes of World War II was built upon the belief that deep historical differences could be papered over through economic integration. Initially, this line of thinking bore fruit; the post-war period that was secured by the existence of NATO brought with it a period of European economic revitalisation, which in turn provided the opportunity for nations such as France and Germany to bridge their historical differences through the establishment of common economic policies and transnational institutions. While the initial vehicle for European economic unity, the European Coal and Steel Community, formed in 1951, was designed to permit France to monitor German industry and allay concerns over potential German militarisation, its actual impact was to create supranational supervisory bodies that ultimately led to the creation of the European Union in 1993.

The connectivity between Europe’s economic development and NATO is real; there are 28 current EU members, 22 of whom are also members of NATO. But World War II ended 75 years ago, and the old national differences and prejudices long embedded in Europe are re-emerging with a vengeance. The foundation of the EU’s economic health is the European Monetary Union, whose strength is derived from fundamental rules of economic management enshrined in various treaties of the EU. The dual financial crises of 2007-08 and 2010-12, however, resulted in these rules being circumvented or broken outright in order to bail out failing EMU member nations such as Greece, Italy, Portugal and Spain. The bailouts were the manifestation of French-backed policies favouring relaxed fiscal and monetary policy over the more rigid financial controls favoured by Germany, and they drove a wedge between Europe’s two major economic powers in the process, with the France-supported policies ultimately being paid for by Germany.

The Franco-German political-economic duopoly that has held Europe together during the post-war period is fracturing, with Europe being pulled in different directions by the gravitational forces of these two incompatible economic models that are likely incapable of sustaining a singular economic union, let alone underwriting a geriatric military alliance that has lost its purpose and meaning. NATO is on life-support, and Europe is being asked to foot the bill to keep breathing life into an increasingly moribund alliance whose brain death is readily recognised, but rarely acknowledged.