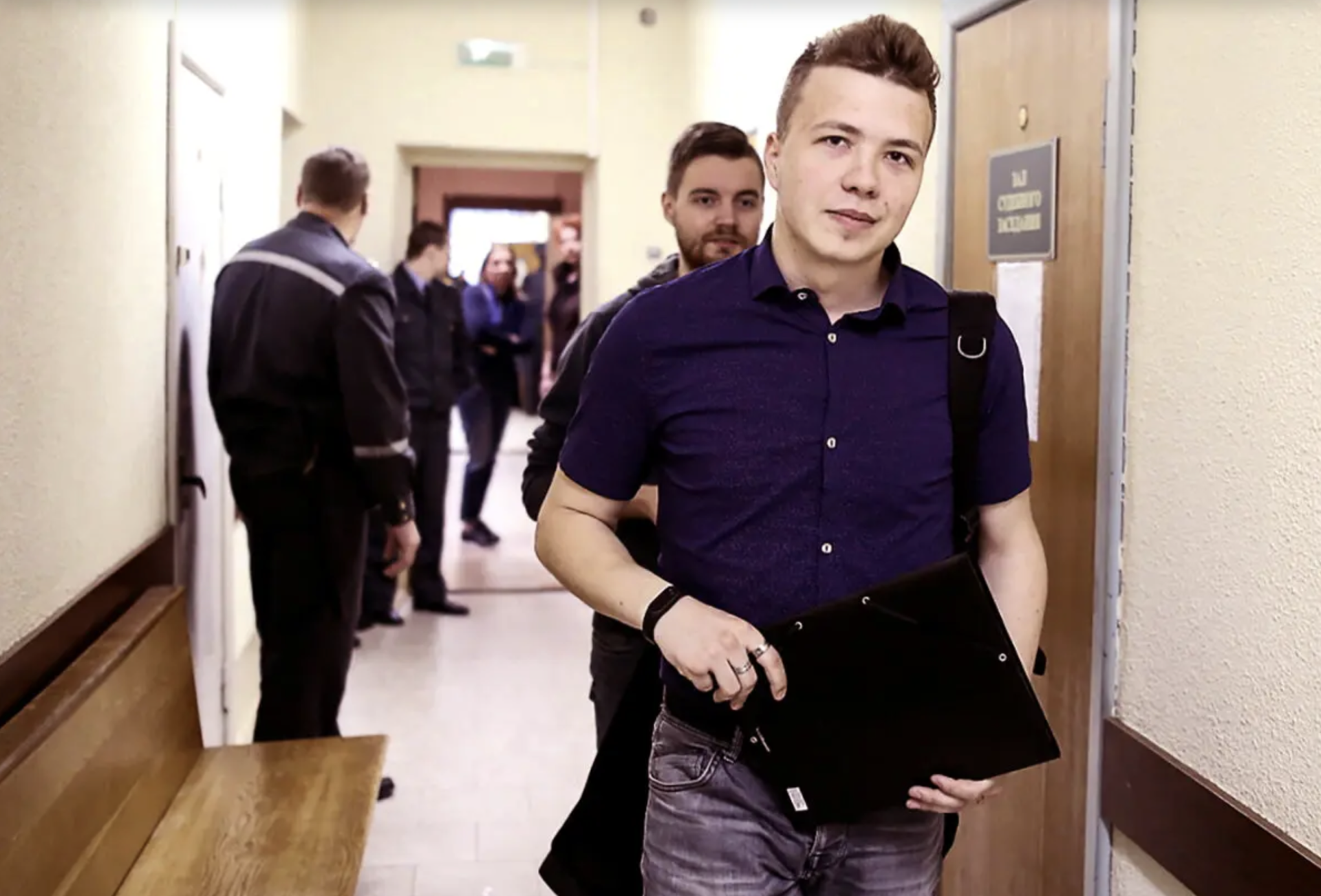 Surprise! Turns out the West and its vassals long ago set the standard for forcing airliners down when it suits their designs. Unprecedented? Nyet!

Hybrid war asset Roman Protasevich, “a U.S. trained and financed regime operator who tried to violently overthrow the government of Belarus to then install a neoliberal U.S. client regime”. Protasevich is now on his way to canonization by the Western press. The quickest path from obscurity to global fame.

Last summer Ukraine’s security service SBU tried to play a dirty trick on Lukashenko. Russian volunteers, who had fought on the Novorossiyan side in the Ukrainian civil war were made a fake job offer, “security” work on Syrian oil fields. The Wagnerites (as private military contractors are called in Russia) were to gather in Minsk. A Turkish airways flight would then take them to Syria.

SBU’s secret plan was to intercept the Turkish plane while in Ukrainian airspace, force it to land and arrest the “terrorists”. Something went wrong. Plan B was to claim the mercenaries had been sent by Russia and Putin to stage a coup against Lukashenko. The Belarusians in fact believed this lie for a week.

Moon of Alabama reported on the events here:

The ‘Russian Coup’ Plot In Belarus Was Faked By Ukraine

Also remember, that the plane of Bolivian president Evo Morales was forced to land in Austria in July 2013, after France, Spain, Portugal and Italy had closed their airspace on American orders.

Moscow: Belarusian President Alexander Lukashenko on Sunday personally ordered a fighter jet to intercept a Ryanair flight carrying a young opposition blogger, forcing it to redirect and land in Belarus.

The Boeing aircraft, flying from the Greek capital Athens to Vilnius, had almost reached Lithuania when it changed direction and was escorted to the Belarusian capital of Minsk. On arrival, police detained activist ccccc, 26, who had been on a wanted list after last year’s mass street protests in the wake of an election in which Lukashenko claimed a landslide but disputed victory.
While the incident unfolded yesterday I amused myself reading the know-nothing responses from several European prime ministers and officials.

The President of Lithuania:

Unprecedented event! A civilian passenger plane flying to Vilnius was forcibly landed in #Minsk. Belarusian political activist & founder of @NEXTA_EN was on the plane. He is arrested. regime is behind the abhorrent action. I demand to free Roman Protasevič urgently!

The President of the Nordic Council of Ministers:

I have asked @eucopresident to expand tomorrow’s #EUCO agenda and discuss immediate sanctions against A. Lukashenka regime. Hijacking of a civilian plane is an unprecedentedact of state terrorism. It cannot go unpunished.

The Prime Minister of Greece:

The forced landing of a commercial plane to detain a journalist is an unprecedented, shocking act. We demand all passengers’ immediate release. Tomorrow’s #EUCO must address the need to step up pressure on Belarus. Enough is enough.
The incident is totally NOT unprecedented.

In 1954 Israel forced a Syrian passenger plane to land to gain hostages which it hoped to exchange for captured Israeli soldiers.

In 1957 French authorities diverted a Morocco-Spain Air Maroc flight to Algiers. Algerian independence leader Ahmed Ben Bella (based in MA) was on board. Air Maroc was mostly French-owned. ABB was jailed in Algiers but became the first President of Algeria 5 years later.

In 2010 the U.S. wanted to arrest a man who was on a flight from France to Mexico. On U.S. instigation the plane was diverted to Canada where the man was arrested and later transferred to the U.S.

In 2012 Turkey forced down a Syrian passenger plane flying from Moscow to Damascus to search it for weapons. None were found.

In 2013 U.S. allies shut down their airspace for a flight carrying the Bolivian President Evo Morales from Moscow. The plane had to divert to Austria where the authorities insisted on searching the plane for the “fugitive” Edward Snowden before letting it fly again. Snowden was not on board.

In 2016 the Ukraine sent military jets to force a plane flying from Kiev to Minsk to return to Kiev. The authorities were looking for a certain passenger on board who was later found to have been the wrong man.

As Petri Krohn notes above the Ukraine in 2020 had planned to abduct Russian mercenaries on a flight from Minsk to Turkey by forcing the plane to land in Kiev. The plot failed.

Gideon Rachman of the Financial Times notes that the ‘west’ can hardly complain about yesterday’s incident when it  behaves in even more egregious ways:

That thought raises the unfortunate precedent set by the US through its policies of drone strikes and “extraordinary renditions”, during its “war on terror”. The Americans can point out that this kind of treatment was reserved for those who used or planned actual violence against the US or its allies. But, to invert the old saying, one man’s freedom fighter is another man’s terrorist. Belarus had placed Protasevich on a terrorist watchlist.

Nobody reasonable should accept the Belarusian (or Chinese or Russian) equation of peaceful dissent with terrorism. But America has encouraged the idea that powerful countries can reach out beyond their borders and grab people.

Belarus did not even reach beyond its borders but acted fully within its rights under international law.

Roman Protasevich is, like his partner the Atlantic Council fellow Franak Viačorka, a U.S. trained and financed regime operator who tried to violently overthrow the government of Belarus to then install a neoliberal U.S. client regime:

I know Raman Pratasevich for 8 years as principled, brave journalist. He is always on the frontline. Raman, Ihar Losik & I — we were Havel fellows at @rferl. When Ihar Losik was imprisoned last summer, Raman kindly took over Ihar’s project @belamova. He may be tortured by KGB now.

When the color revolution in Belarus failed we wrote about the Viačorka/Protasevich run Telegram channel Nexta which directed the protests in Minsk:

Nexta is led by anti-Lukashenko pro-Western ‘activists’ in Poland. The editor in chief is one Roman Protasevich. He was perviously a journalist for the Polish-Lithuanian-funded Euroradio, as well as for the CIA’s Radio Liberty. Nexta was founded by Stepan Putila who earlier worked for the Polish-Belarusian channel Belsat which is based in Warsaw and is funded by the Polish Foreign Ministry. Both currently live in Warsaw.

As these media produce fresh videos 24 by 7 and do many online post there must be a sizeable staff behind Nexta, in Poland as well as on the ground in Belarus. This is certainly not a cheep operation and it certainly has nation state backing. Obama’s deputy national security advisor left little doubt about who is behind this game.

(There is more about Nexta in this open thread.)

Protasevich [like the other Western hero du jour, Navalny] is by the way no heart bleeding liberal. Ivan Katchanowski of the University of Ottawa notes that his political leanings are quite dubious:

Google searches show no references in Western media to past service in neo-Nazi-led Azov battalion in Ukraine of Belarusian opposition blogger, who was arrested by Belarus KGB after it diverted Irish Ryanair passenger plane that was flying over Belarus

Promoting fascists in the Ukraine, working for U.S. government regime change media, collaborating with various secret services in east Europe and directing a color revolution attempt in Belarus from abroad should be enough reason for Belarus to put the man in jail. Protasevich clearly worked against the interest of his country. [And humanity!]

The ‘west’ is of course furious that one of its regime change operators has been taken down in a way it similarly uses. It will try to dream up some sanctions or other measures it can impose on Belarus. But the only effect such pressure will have is to push Belarus further into the Union State with Russia. It was the Union State that saved Belarus and will do so again.

Measures like the one below are counterproductive to their real aim and only hurt people who are not involved in the game: