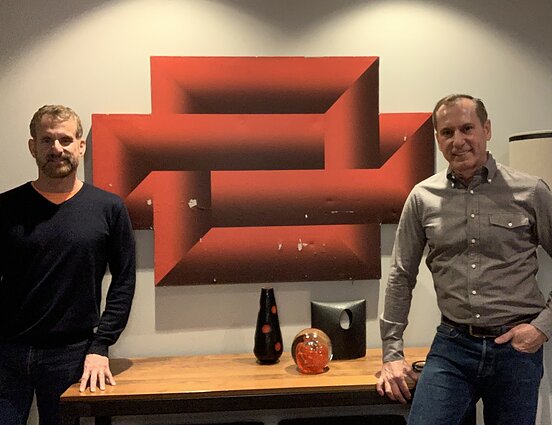 A long-lost painting by the famous American-Lithuanian op art painter Kazys Varnelis turned up in a Chicago garage – where it ended up after being rescued from trash and almost painted over.

It was four years ago that Robert Zizzo, who was staying in his friend Steve Gilberg’s house in Chicago, came across and unusually shaped canvas left by someone in a trash bin.

He took it and brought it to their garage where the painting then lay forgotten until a few weeks ago. Gilberg says he felt like painting and remembered the canvas in his garage. “I thought I could paint over it,” he told LRT TV.

But before doing that, he inspected the signature on the other side of the canvas: Quiz by Kazys Varnelis, 1973. The owners looked up the name and discovered Varnelis was a famous Lithuanian artist.

Born in western Lithuania in 1947, he ended up in Chicago after the Second World War. Initially working on ecclesiastical art and church interiors, Varnelis gained recognition in the late 1960s for his distinctive painting style: optical and three-dimensional illusions based on geometric abstractions and minimal forms.

Varnelis’ works are currently held by Solomon R Guggenheim Museum, the Art Institute of Chicago, Currier Museum of Art, and other museums, including the Kazys Varnelis House–Museum in Vilnius.

“I told Steve, we have something special here,” Zizzo recalls. “First of all, do not paint over it.”

They got in touch with Varnelis’ family (the painter himself passed away in 2010) and his museum in Vilnius. Another painting by Varnelis, Zizzo found, sold for 7,000 US dollars.

“I’m glad we didn’t toss it or try to sell it or anything like that,” Zizzo says. The painting was considered lost since 1974 when it was exhibited in Varnelis’ one-man show at Milwaukee Art Museum.

“The piece represents the peak of Varnelis’ fame, his Chicago period of op art painting,” says Aistė Bimbirytė-Mackevičienė, an art historian with the Kazys Varnelis House–Museum.

Though modern-looking, Varnelis’ works have been interpreted as reworkings of Lithuanian folk art, inspired by traditional wooden cross carvings that his father used to make.

“In 1974, he held a personal show at Milwaukee Art Museum, which was later taken to Iowa University, exhibiting 27 works,” according to Bimbirytė-Mackevičienė. “This discovery is the first sighting of the piece [Quiz] since then.”

The owners of the painting say they are planning to restore it and, if any gallery wants to exhibit in Lithuania, they will gladly lend it.