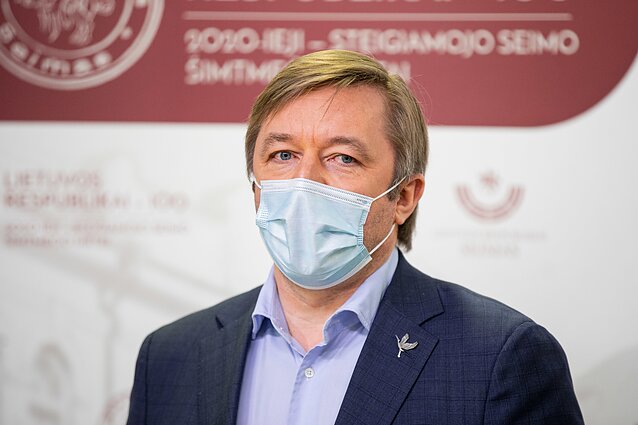 If law enforcement finds no wrongdoing on behalf of the minister, Ramūnas Karbauskis said he would raise the question regarding the work of LRT Investigation Team.

Karbauskis is the head of Lithuanian Farmers and Greens Union (LVŽS), which is in a ruling coalition with the Polish-minority party represented by Narkevič, the Electoral Action of Poles in Lithuania – Christian Families Alliance.

“It’s being talked about a crime, as if someone admitted guilt, said something. The law enforcement institutions will investigate, and then it will be clear if there’s a basis to talk about [Narkevič],” he said.

“And if there isn’t, we should speak about what LRT Investigation Team does. It will be a very interesting question,” said Karbauskis.

LRT reported on Thursday that Narkevič allegedly received kickbacks from a construction company owned by a former family friend.

The owner of a Trakai-based construction company, Sodžiaus Būstas, told LRT that Narkevič helped him win public tender contracts. In exchange, the company was allegedly forced to renovate Narkevič’s family house for free.

Lithuania’s anti-corruption body, the Special Investigation Service (STT), is currently conducting an investigation into the affair, LRT has found.

“The assessment by LRT, in my view, is very questionable,” said Karbauskis. “I’ve read so many investigations and I was simply wondering, from where the ‘competencies’ of these investigators come from.”

He also suggested that LRT’s investigation stories were deliberately timed to coincide with discussions on LRT law amendments in the parliament.

“The other question boils down to on what grounds the investigations are done, because they have coincided with deliberations surrounding the LRT law [in the parliament],” said Karbauskis. “It could have been coincidences, […] but when it coincides three or four times, it’s difficult to think otherwise.”

“[LRT Investigation Team] is a means to apply pressure and it’s a real shame that the national broadcaster is engaged in that,” added Karbauskis.

The amendment to the LRT law aimed to change the public broadcaster’s management model by introducing the LRT Board and an ombudsperson. It was drafted by the ruling party.

LRT, as well as international watchdogs, have called the proposals an attack on the independence of the Lithuanian public broadcaster. The Constitutional Court also said a previous parliamentary investigation into LRT’s financial and economic activities violated the Constitution.

In May 2020, the parliament  adopted   the LRT law amendment, establishing three committees instead of a council and ombudsperson. On Thursday, Narkevič’s party, the Electoral Action of Poles, also said it would turn to law enforcement over the alleged “smear campaign” run by LRT against the minister.