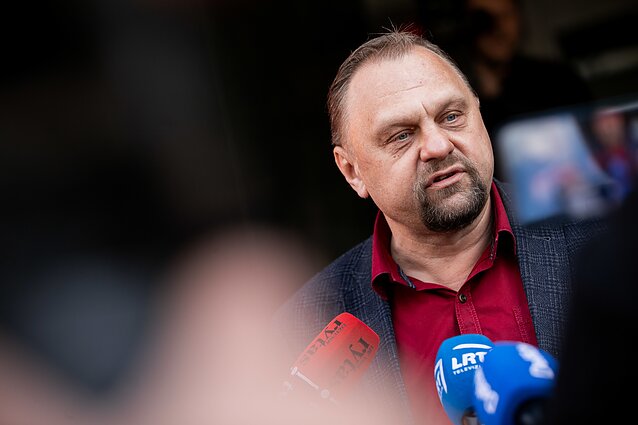 Valdas Sutkus, the president of the Lithuanian Business Confederation (LVK), is suspected of organising a smear campaign against former transport minister and taking bribes from business groups. Sutkus is under investigation as part of a large-scale lobbying corruption case,

Lithuania’s anti-corruption agency, the Special Investigation Service (STT), said on Wednesday that Sutkus, who was detained a day earlier before being released from remand, was allegedly paid to collect and publish information undermining the reputation of Rokas Masiulis, who was transport minister until last August.

“The aim was to have Masiulis removed from his position,” the STT said.

This week, the STT revealed it was conducting a large-scale investigation into illegal lobbying and influence peddling. Business groups were allegedly seeking to influence legislation on taxes and government spending.

The agency also suspects Sutkus of taking bribes from several road construction companies as well as Mantas Zalatorius, the president of the Association of Lithuanian Banks (LBA).

Zalatorius was also detained as part of the investigation on Tuesday.

Sutkus has rejected suspicions against him.

“I neither gave any bribes to anyone nor took any from anyone,” he told reporters on Wednesday after Vilnius City District Court denied the prosecution’s request to keep him in custody.

STT officers have brought formal suspicions against Sutkus, Zalatorius and the heads of two road construction companies, a consultancy and an IT firm.

While the STT did not name the individuals, law-enforcement officials have confirmed to BNS that Juozas Aleksa, the CEO of Šiaulių Plentas, and Aldas Rusevičius, the board chairman and CEO of Kauno Tiltai, have also been detained as part of the investigation.

Searches at Kauno Tiltai and Maxima

The STT said its officers conducted dozens of searches. In addition to visiting the parliament administration and the head office of Kauno Tiltai, one of the biggest road construction companies in Lithuania, they also conducted searches at Maxima, a major supermarket chain, on Tuesday.

“They asked for information about events dating back several years,” said Ernesta Dapkienė, the head of communications at Maxima, adding that the investigators took documents, but did not detain anyone.

“We cooperate with the officers and provided them with all the information they needed,” she said.

“I am now getting the whole picture of what was going on,” Masiulis told BNS on Wednesday. “I do remember the pressure that Mr Sutkus began when I was invited to the Seimas.”

Back in 2018, Masiulis said he had received threats from the Lithuanian Businesses Confederation (LVK) following a meeting of the parliamentary Economy Committee. During the sitting, he was criticised for poor condition of the country’s roads.

Masiulis was removed from the post last August on the insistence of the ruling coalition and replaced by Jaroslav Narkevič.

Masiulis said on Wednesday that Sutkus may have coordinated political pressure and efforts to undermine his reputation.

“Mr Sutkus played first fiddle and his allegations were later picked up by others, including politicians,” Masiulis said.