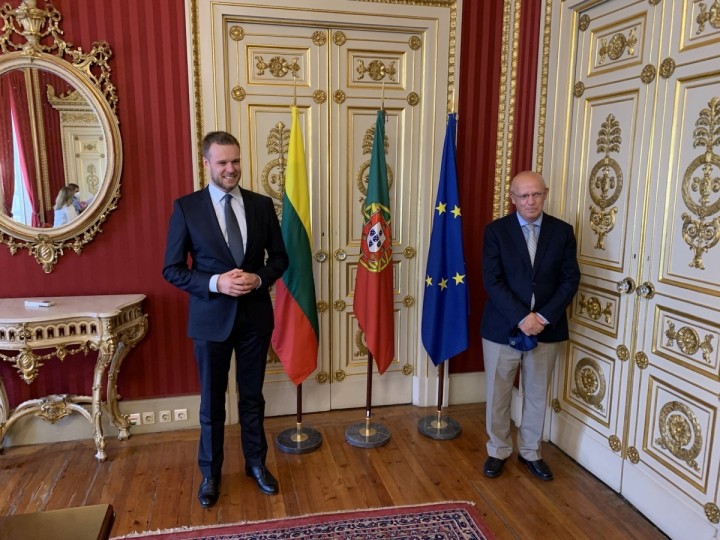 On 28 September, the Minister of Foreign Affairs of Lithuania Gabrielius Landsbergis paid a working visit to Lisbon, Portugal, where he met with the Portuguese Minister of State and Foreign Affairs Augusto Santos Silva. The Foreign Ministers discussed bilateral cooperation between Lithuania and Portugal, EU relations with Belarus, Russia and China, as well as the EU’s role in Africa.
Landsbergis welcomed the excellent bilateral relationship and thanked Portugal for its contribution to the strengthening of security of Lithuania and the whole region. Since September, the Portuguese Air Forces are leading NATO’s Baltic Air Policing mission for the fifth time.

In the meeting, Lithuania’s Foreign Minister highlighted the need for a united EU policy toward China. “The EU must speak with one voice in its relations with China. This way we will be better able to defend our common interests. Thus, the EU 27+ 1 format is the most suitable way to communicate with China,” said the head of Lithuania’s Diplomacy. The Foreign Ministers also called for the EU’s stronger role in the Indo-Pacific region.

As regards the EU’s migration policy and the situation related to illegal migrants in Lithuania, Landsbergis stressed the need to adapt the EU’s legal framework to such new challenges facing Lithuania due to the hybrid attack by Belarus.

The meeting with the Chair of the European Affairs Committee of the Assembleia da República (Portuguese Parliament) Luís Capoulas Santos focused on the EU’s relations with China and migration policy.

On 4 October this year, Lithuania and Portugal will celebrate the 30th anniversary of the re-establishment of their diplomatic relations.