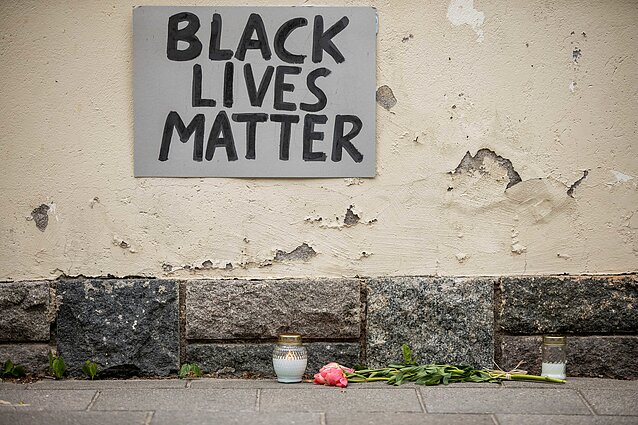 Lithuanian activists have expressed solidarity with American protesters by leaving flowers and candles outside the US embassy in Vilnius. However, they were initially removed by the police.

Massive protests across the US have been continuing for eight days following the killing of George Floyd by the police.

Rallies against racism have also occurred across the world. In Lithuania, human rights activists have called an action, titled I Can’t Breathe, inviting people to show solidarity with US protesters.

“We simply invited people to peacefully express their position – with flowers, candles or signs or any other peaceful message to the United States, which we believe is the right form,” Jūratė Juškaitė, a spokesperson for the Lithuanian Centre for Human Rights (LCHR), told LRT RADIO.

“Moreover, it is important to show that there are people in Lithuania who find such behaviour [police violence] and structural racism unacceptable,” she said.

However, flowers and candles left by activists outside the US embassy in Vilnius on Tuesday were soon removed by the police.

Police spokesman Ramūnas Matonis says it was done for security, since the police had not been informed about the action.

“The police was notified about the flowers outside the embassy. They did not know if they were really flowers, what was in them and so on. Since police officers did not know about it, the municipality had not been informed, officers have the right to stop it. That’s what they did,” he told LRT RADIO.

But activists say the police acted unreasonably. According to Juškaitė, the action is not a rally and does not require authorisation from the city authorities.

According to Vilnius Municipality, it has to be notified about planned rallies of more than 15 people.

Meanwhile, the US embassy said it supported people’s right to express positions.

“I want really to underscore that freedom of speech and freedom of assembly are cornerstones of democracy and this embassy will always advocate for those freedoms,” US Ambassador Robert Gilchrist told LRT RADIO.

“We did talk with LCHR and the police after the removal of the sign and LCHR has now placed a new sign directly in front of the embassy and we support their right to do so,” he said.

The newly placed signs have not been removed.