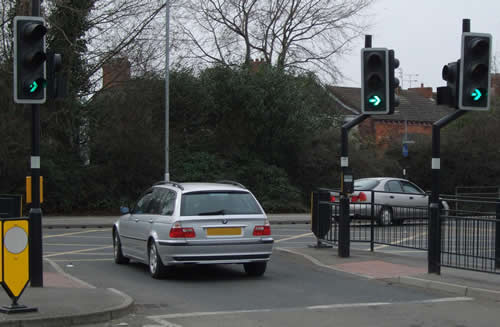 The Lithuanian Cabinet is likely to give the go-ahead on Wednesday for placing a green arrow sign allowing drivers to turn right on a red light back at intersections as a temporary measure, Transport Minister Jaroslav Narkevic said on Tuesday.

“We are planning to submit a draft resolution this Wednesday, that is tomorrow,” he told reporters. “We have drafted that resolution to extend the validity of the green arrows.” The Transport Ministry will make final decisions on placing a green arrow sign at specific intersections at municipalities’ request and based on experts’ recommendations, according to Narkevic. The green arrow signs allowing a right turn on red were removed from all intersections in Lithuania in early January, but local authorities in Vilnius and other cities say that the measure has increased traffic congestion, but has done little to improve safety. The Transport Ministry suggested removing the green arrow signs back in 2014 after a study carried out in Kaunas for several years linked the presence of the “green arrows” at intersections to higher numbers of road accident fatalities or injuries.