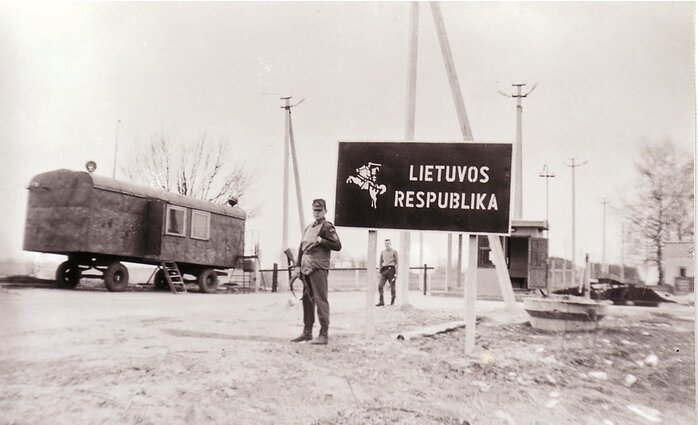 In November 2020, the service marked its 30th anniversary. In an interview with LRT.lt, one of the first border guards, Almantas Laučius, recalls the first tense days spent by campfires, facing shootings and violence by the Soviet forces.

Had you encountered dangerous situations during the first days of border protection?

Sometimes passing cars would not stop and break through roadblocks.

Various things happened there, including during the bloody January events [the Soviet military crackdown in Vilnius on January 13, 1991, that left 14 people dead].

We did not think about rest back then. There could be no rest during such times. If Lithuania had lost its government, the state would have collapsed. Everyone realised this.

[…] After the January events, we had more things at the checkpoint, including a gas stove, documents, registration logs, mattresses. But conditions were still poor. There was no electricity and we started campfires to warm up.

How did the first shift go?

People looked at us strangely. Some cursed us, some said that we were doing a great job.

People wanted to cross the border [with Belarus], but we asked them to stop and provide documents. Until then, such a procedure was not common. […] For 50 years, people could walk freely in both directions. But we sometimes sent people back home to get their documents. That is why they cursed at us.

What was the size of the area you had to control?

The administrative border was long, difficult to measure. Later, the state border was clarified, demarcated. Until then, those who wanted to bypass the checkpoints simply used rural and forest roads.

Heads of border checkpoints hired farmers to plough those forest roads so that nobody could drive on them. Sometimes, we blocked roads with concrete slabs. […] The Vilnius District Border Guard also had a truck to patrol the area.

What weapons did you have at that time?

We did not receive any weapons from the government. This was a fairly sensible decision, as the Soviet propaganda said that we were dangerous, that they needed to use weapons against us.

That is what they did, although they did not shoot at us directly. But we were often beaten, our checkpoints destroyed. For example, my checkpoint was burned twice by Soviet soldiers.

There were cruel experiences. For example, the Olympic rowing champion Vladas Česiūnas, who worked as a border guard, and his colleague Algis Meseckas were tied up and beaten with machine guns. Their ribs and skulls were broken, lungs pierced. They were also diagnosed with concussions.

Who attacked and beat the officers working at the Lithuanian border?

The OMON [the Soviet special police]. Their military Zil trucks arrived, soldiers in semi-civilian clothes with machine guns jumped out, and beat us.

Among the border guards was also a Belarusian woman called Zhana. I will try to find her and restore justice.

When did these attacks take place?

My checkpoint was burned, and officers were attacked in May 1991. It all happened after the January events.

On March 7, 1991, my checkpoint was also fired at. At the checkpoint, there was a booth where guards could hide from wind and rain. Luckily, border guard Laimutis Patronavičius was sitting, because the bullet flew over his head. If he had been standing, we would have lost a colleague. But he still serves in the border guard service.

Do you think there would have been more conflicts with the Soviets if you had had guns?

We started receiving guns after the failed Moscow coup in August 1991. A shift had several automatic rifles, while the bosses held pistols.

How did the first border guards manage to communicate with the Lithuanian government when developing the border guard system?

There were, and still are, all kinds of people. Some were for Lithuania. Others occupied important state positions, but behaved so reservedly that you could call them enemies. So there was ambiguity in the government at that time.

There, my friend was locked up in a temporary detention facility for nothing. The police simply showed off its power. The guard was locked because he used a weapon at the post, but he used it to defend the checkpoint and civilians. He shot a person who used a weapon near the post.

How did you fight smuggling? Is it true that after having their things confiscated, smugglers were able to recover them?

Before we had customs, such things could happen. Through the Medininkai checkpoint, the Vietnamese would smuggle watches and perfume. We stopped them, took their goods, and detained them. While there were no legal procedures, we transported the confiscated goods and detainees to the police.

Basically, the border guards did not even have the right to confiscate any items. When we escorted the detainees to Vilnius, the shift was left without a car. […] If any items were confiscated by a court decision, then the border guards received rewards of 10 or 20 percent of the their value.

When officers began guarding the Lithuanian border, part of the Soviet military was still in Lithuania. Were there any problems when Soviet soldiers crossed the border?

There were problems. It all depended on who was driving the car that was crossing the border. Smart officers did not do anything, but some told soldiers to attack the border guards.

[…] Ordinary Russian soldiers not always agreed with such commands. They said their commander ‘is stupid, but I cannot disobey him because he is my commander’.

When did you feel that the Lithuanian border guards started to be respected by the neighbouring states and their officials?

Firstly, we felt that people’s attitude towards us had changed.

Are you talking about Lithuanians?

Residents of Lithuania. We cannot talk only about Lithuanians because there were not that many [ethnic] Lithuanians in the areas where I was working. More people spoke other languages, but they also started respecting us.

One Pole approached the post during the January events and said: ‘I heard that Vilnius TV Tower was occupied, the connection was lost, so I came to help you.’

When you started working as a border guard, didn’t you think that this job was too dangerous, that you had to quit?

I didn’t think about it. […] My father was a [anti-Soviet partisan] fighter; my grandfather was a volunteer in the Lithuanian army in 1918. What else and where else could I be? This is continuity. Generations change, but the values of freedom and independence always remain.

When did you end your service at the border?

In 1996. At first, I served elsewhere and eventually retired.

We have founded the Border Guards’ Club that unites current and former [officers], as well as their family members. I participate in its activity; I am one of the founders of the club. Now, there are fewer activities due to coronavirus, but I often call my former colleagues.

Have you visited the border post where you started your service?

I have not been there lately. The commander of the Vilnius border guards invited me to visit the Lavoriškės checkpoint, he organised a meeting of current border guards and the first officers. But the meeting was postponed because of the virus.

Definitely. I really want to see it.