Lithuanian Army to be equipped with additional G36 Assault Rifles 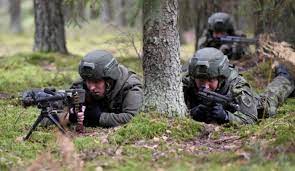 The contract’s value is approximately 19 million euros. Supply is expected in 2022-23. Israel’s IWI is bidding in a separate tender for machine guns.

The Lithuanian Ministry of Defence awarded a contract worth approximately 19 million euros to the German company Heckler and Koch in late September, for the production and supply of additional G36 assault rifles to its military. The new batch will be delivered in 2022-23.

The G36 has been the standard assault rifle of the Lithuanian Armed Forces in various versions since 2003. “The technical and tactical parameters of the G-36 meet the requirements of the armed forces and ensure that the weapon is reliable in various tactical conditions, required for national and international military operations,” stated Defence Minister Arvydas Anušauskas.

In August, IsraelDefense reported that the Lithuanian government had issued a tender for the supply of 3,000 7.62mm machine guns for the Lithuanian army, worth 33.8 million euros. Among the bidders is the Israel Weapons Industry (IWI), with its Negev machine gun.