Lithuania: President Nauseda – Half a Year Filled with Confrontations and Conflicts 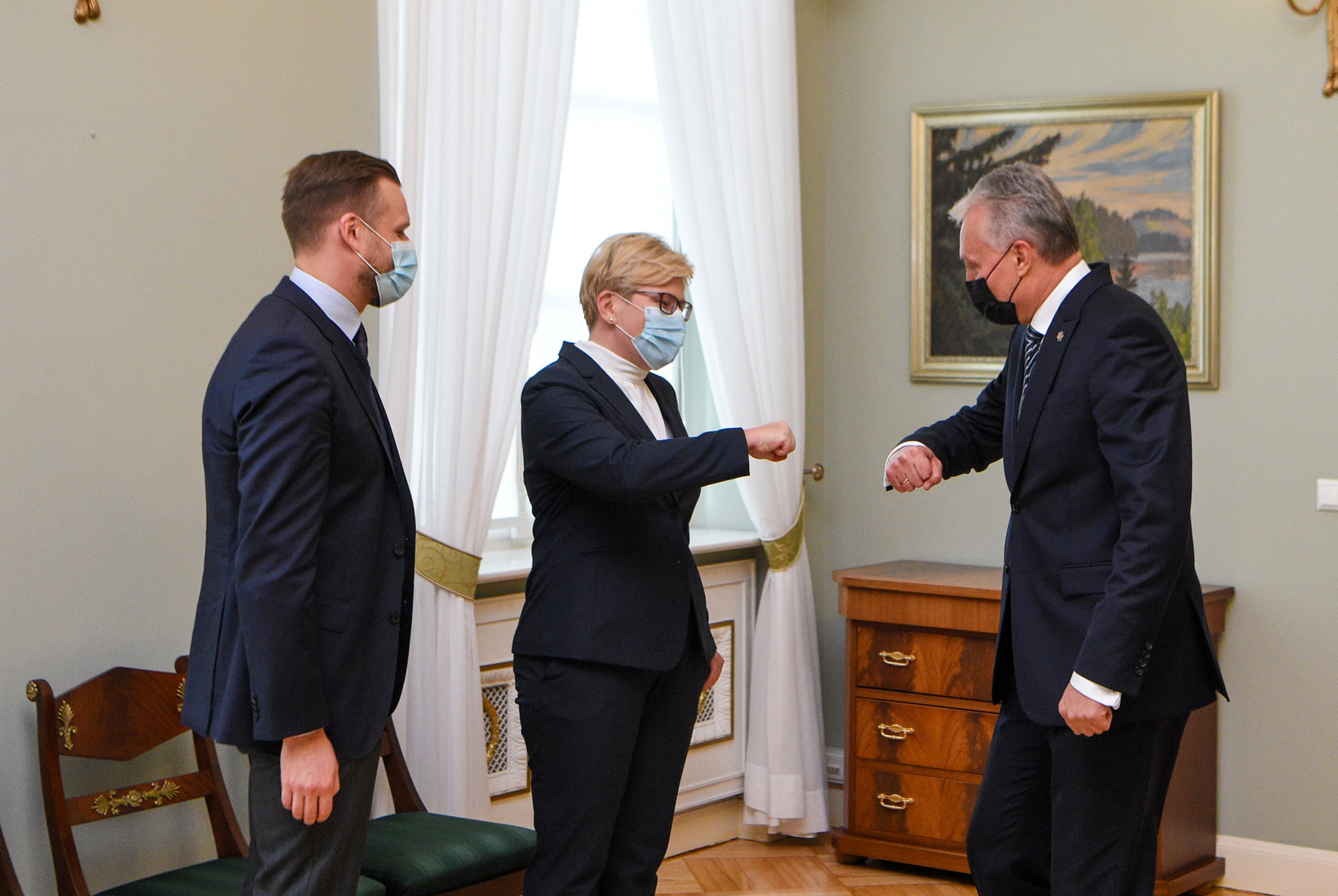 After the October 2020 parliamentary elections frictions in the country’s political life began to mount rapidly. Once the previously ruling political party coalition (Peasants-Greens and Social Democrats) lost their majority in parliament, and a new Conservative party led tri-party coalition agreement was signed, President Nauseda sought to reposition his office’s role in the newly emerging political constellation. Despite skyrocketing infection rates in the country at the time, Nauseda took time to meet and interview every single ministerial cabinet nominee (he rejected two candidates and then met with two new nominees). Political analysts found such president’s “sticking to the rules” unacceptable and criticized Nauseda’s insistence to use the entire 15-day period allotted to the President by the Constitution to approve and submit the new government members for a parliamentary vote. Political observers noted that none of Nauseda’s predecessors used the entire allotted two-week period nor did his predecessors held interviews with every ministerial candidate. Nauseda’s insistence to stick with the rules under the most pressing circumstances while the country was in the tight grip of Covid-19 with hundreds of deaths happening every day was perceived as a major political misstep and insensitive oversight that, arguably, set the tone for confrontation with the winning Homeland Union – Lithuanian Christian Democrats (HU-LCD) party.

Once approved, the new government under the Prime Ministership of Ingrida Simonyte—Lithuania’s first female prime minister and a high-ranking member of the HU-LCD party that backed her candidacy in the 2019 presidential elections—began to clash with President Nauseda almost immediately. Initially, the issue of disagreement between the two institutions centered around the acquisition and distribution of vaccines, then turned into disagreement over vaccination process and speed, and, eventually, spilled into confrontation over the representation of Lithuania’s political and public health interests at the EU level. Specifically, Nauseda’s and Simonyte’s offices publicly contended over two questions: first, which office—prime minister’s or president’s—should represent Lithuania at EU meetings on matters of public health and vaccine access/distribution; and, second, an even more contentious matter centered around who should be attending the European Council meetings and whether EU matters fall under foreign affairs or domestic politics domain.

Nauseda’s office argued that the question of who represents Lithuania at EU summits had been “settled” during President Grybauskaite’s term in office (2009-2019). Given a decade long tradition started under Grybauskaite who had been representing the country and attending all EU summits—although prior to her decade long presidency Lithuania was sometimes represented by prime minister at EU meetings—the presidential office claimed that there was no need to re-think or debate the representation question. Nauseda signaled that as part of President’s Constitutional duties and responsibilities he intended to fulfil his Constitutional obligations by attending every European Council meeting no matter what kind of issues—domestic or foreign policy in nature—appeared on the Council’s agenda. The HU-LCD party leadership, party members (i.e., current European Parliament member and former Prime Minister Kubilius, Lithuanian parliament HU-LCD member Matas Maldeikis and others) and, eventually, Prime Minister Simonyte pushed back, arguing that public health matters are government’s prerogatives in which the President has no constitutionally assgined decision-making powers. Therefore, while attending EU summits and discussing domestic matters, including assuming any commitments, Nauseda would be breaching the Constitutional division of powers—after all, the president cannot commit Lithuania on behalf of the government just like the government cannot assume commitments on behalf of the President.

Local media enjoyed the brewing political bitterness between the two key political institutions and added fodder to the expanding interinstitutional fire by seeking and publishing remarks of HU-LCD members that took confrontational stands towards Nauseda. After nearly five months of political ping-ponging among the HU-LCD leadership, the Prime Minister Simonyte, and President Nauseda, the Prime Minister had decided to write a letter to the President offering a compromise: “In the past, decisions on who – the president or the prime minister – had to represent Lithuania would be made before a European Council meeting based on what issues had more weigh on the agenda. Perhaps we could return to such discussions.” In essence, Simonyte suggested a return to the pre-Grybauskaite representation model of Lithuania at EU meetings and hoped that “who goes to Brussels” question would be amicably agreed upon between the prime minister’s and president’s offices.

No political analyst expected that Nauseda would accept Simonyte’s offer. Indeed, in early June the presidential office issued a public response to Prime Minister declining to “share” representation duties at EU level and signaling that only the President would represent Lithuania at EU Council meetings [1]. The President’s office implied that further escalation of this question would be viewed as anti-constitutional and against state’s interests [2]. After Nauseda’s response, Simonyte seemed to have “buried” the issue [3], yet the HU-LCD party members, especially Zygimantas Pavilionis, Chair of the Parliament’s Foreign Policy Committee, and  HU-LCD  MP Matas Maldeikis, seem to be intent on keeping the confrontation with the President in a “to be continued” phase. Both parliamentarians dismissed Nauseda’s response as lacking sound legal and political argumentation and described his answer as an expression of president’s personal “political position.” (Maldeikis even accused the President of “lying.”) Pavilionis suggested that President’s response did not “close the [representation] matter,” and that he planned to pursue a legal route possibly submitting an inquiry with the country’s Constitutional Court if necessary [4]. Meanwhile, Maldeikis’s proposed bill to regulate the country’s representation issue at EU summits has been tabled by the Parliament Chair for the time being, but the parliamentarian has suggested that his bill could be brought up for parliament’s debate at moment’s notice.

In parallel to the ongoing public disagreements between the President and Prime Minister on who should represent Lithuania at EU Council meetings, another friction between Nauseda and the HU-LCD party Chair and current Foreign Minister Gabrielius Landsbergis over ambassadorial appointments unexpectedly erupted in late January. Landsbergis had proposed former Foreign Minister Linkevicius and former Defense Minister Karoblis to become ambassadors to the US and the EU, respectively, but to everybody’s surprise Nauseda rejected both ambassadorial nominees on the grounds that the two policymakers needed to go through a political “cooling off” phase. This presidential decision produced a wave of criticism not only from political analysts and political scientists, but also from former ambassadors and even intelligence officials. Nauseda’s decision was described not only as shortsighted because Lithuania had ambassadorial vacancies in two highly important political locations for more than a year, but also shocking due to an unheard-of justification in Lithuania’s ambassadorial rejections that the nominees needed to “cool off.” It took another month for this political controversy to subside as Foreign Minister scrambled to propose another candidate for the ambassadorship to the US, which Nauseda eventually accepted. (Ambassadorial nomination to the EU remains unresolved.)

The most recent friction between the President and the HU-LCD leadership, namely, Landsbergis and Simonyte, arose last week after the June 24th EU Council meeting during which, among other issues, Hungary’s controversial law that bans the “promotion” of homosexuality to children and young adults and prohibits sex change was discussed. Surprisingly, Nauseda decided not to sign a letter written by 17 EU leaders (among the signatories were Latvian and Estonian Presidents) in which the EU leaders reproached Hungary over LGBTQ rights and pledged to continue fighting against discrimination of the LGBTQ community across the EU. According to the President, he stood up for Hungary because “problems [should not be] solved by letters” and implied that since some EU leaders had not familiarized themselves with the text of the law, they should not take the role of judges [6]. In contradiction to Nauseda’s stand, Prime Minister Simonyte suggested that remarks by the 17 EU leaders expressed in their “very moderate letter” actually “[had] a basis.” Furthermore, President’s backing of Hungary also clashed with the current Foreign Ministry’s position as vice minister of Foreign Affairs Pranckevicius signed another EU letter just a week before that expressed “great concern” over the newly passed Hungarian law.

Mounting disagreements and lack of coordination over domestic and, increasingly, foreign policy issues between key political players clearly risk causing some serious problems down the road. If Nauseda and Landsbergis with Simonyte continue taking opposite stands, then it becomes unclear as to which country’s institutional voice, opinion, and signature truly matters and carries political significance. It is not out of realm of possibility that persistent domestic political frictions could result in an incoherent foreign policy.

Additionally, an equally unsettling trend that has emerged over the past six months is that tensions and confrontations between the President and the ruling coalition had become a norm rather than an exception. Speculations abound about the motives of each conflicting party as to why they continue to take confrontational stands towards each other. Some analysts suggested that Nauseda by positioning himself as a defender of traditional family values is signaling his determination to run for a second presidential term—recent public opinion polls show that the electorate strongly supports the President and his political stands [6]. Meanwhile, the HU-LCD leadership suffered multiple defeats: Nauseda refused to be arm-wrestled into sharing country’s representation at EU Council meetings with Simonyte; the tri-party ruling coalition had also failed in bringing the Partnership law for discussion in Parliament; and both Prime Minister and the HU-LCD party have experienced continuously declining approval ratings [6].

Halfway through the 2021, Lithuania’s political life appears to be filled with little other than political bickering, frictions, and never-ending confrontations. What seems to be certain at this time is that Lithuania is heading into a tension filled and tumultuous political autumn, with the President determined to fight the ruling coalition’s “encroachment” on the presidential office powers and hoping for a guaranteed victory in the 2024 presidential elections.