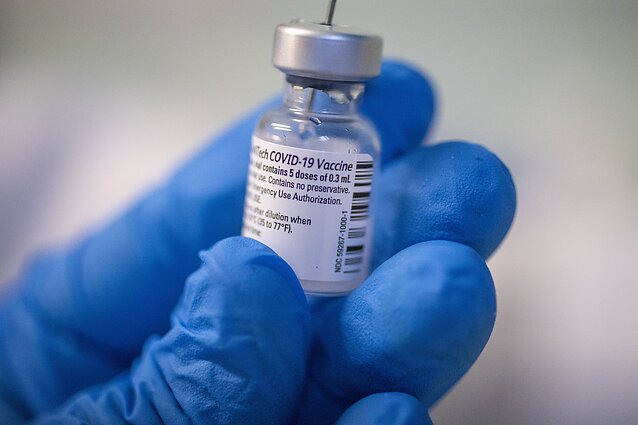 Lithuania has decided to buy more doses of the BioNTech/Pfizer vaccine, as proposed by the European Commission.

“We are informing the European Commission that yes, we are taking part in the reservation of additional quantity of the vaccine,” Prime Minister Ingrida Šimonytė told the cabinet during a meeting on Tuesday evening.

Health Minister Arūnas Dulkys said that Lithuania would receive 616,000 shots of the vaccine.

“The vaccine is distributed among member countries proportionally under a preliminary purchase agreement,” he said.

He confirmed that member states had 24 hours to decide, adding that Latvia was among those that opted to buy additional vaccines.

Gytis Andrulionis, the head of Lithuania’s State Drug Control Agency, told the cabinet that the additional quantity would be enough to vaccinate around 300,000 people, giving each two required shots.

Šimonytė told reporters later that the additional quantity would reach Lithuania in the third or fourth quarter of 2021.

One of the advantages of the BioNTech/Pfizer vaccine is that it can be quickly adapted to mutations in the virus, according to the prime minister.

Lithuania is buying the additional quantity of the vaccine because it is unclear when other vaccines purchased under the joint procurement scheme will reach Lithuania, Šimonytė said.

“In an optimistic scenario, we could have expected a rather large quantities of vaccines in 2021, but this prospect is much vaguer now, meaning that a large part of that amount is being pushed back to 2022,” she said.

The BioNTech/Pfizer vaccine is currently the only one authorised for use in the European Union.

The first batch of the vaccine are to be delivered to Lithuania on Saturday under the EU’s joint procurement scheme.