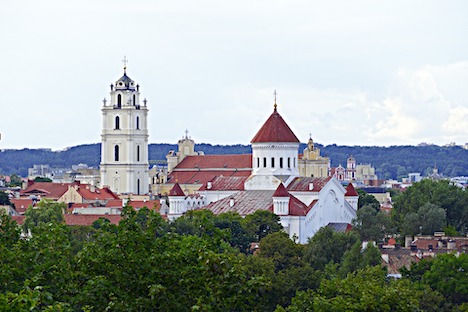 Representatives of four parties in Lithuania, holding negotiations on a future ruling coalition, said on Thursday, June 20, they have completed their work, acknowledging, however, their failure to agree on the child benefit. The Electoral Action of Poles in Lithuania – Christian Families Alliance had demanded raising the child benefit to 100 euros per month per child, from 50 euros now, as of next year and increasing it further to 120 euros in 2021. The other parties argued the increase would strain the budget too much.  Families are now paid 50 euros per month per child and large families and parents raising disabled children get 70 euros.

A Lithuanian court has found two persons guilty of spying for Russia and issued them prison sentences of four years and nine months, a court spokesman said on Friday, June 21.One of the persons used to work at the Lithuanian Air Force’s Air Base in Siauliai, northern Lithuanian, until his detention, and the second had already retired. The court concluded that the two men, born in 1966 and 1961, used to hand over information to a Russian intelligence organisation it was interested in for remuneration and also had contact with representatives of this country’s intelligence organization.

Outgoing Lithuanian President Dalia Grybauskaitė on Thursday, June 20, vetoed a law which, in her opinion, might restrict citizens’ rights to have guns during an emergency situation or wartime. Adopted by the Lithuanian Seimas, the law states that guns and ammunitions can be temporarily taken or commandeered pursuant to the procedures and conditions defined by the laws on emergency situation and martial law.

Lithuania’s government in principle backed plans on Wednesday, June 19, to make intermediaries declare cars’ sale-purchase agreements as early as next year and to also introduce centralised systems of car owners and marketplaces. The government-approved document sets the goal to reduce shadow economy in the construction sector as well as in the areas of sale of cars and their parts and meat products. The government estimates there are some 500-700 million euros in unaccounted money circulates in the construction sector. The share stands at around 151 million euros in the meat and meat product segment and 73 million euros in the car sale market.

Lithuania’s government on Wednesday, June 19, decided to join an initiative by other European countries to set a goal to transition to a climate-neutral economy by 2050, despite possible challenges for the country’s economy, Economy Minister Virginijus Sinkevičius warned, however, that such changes would hit industrial cities, like Jonava, Akmenė and Mažeikiai, the hardest.

The Lithuanian government on Wednesday, June 19, put before the country’s parliament amendments on setting equal higher school admission requirements. Currently in Lithuania, different criteria apply to school-leavers for state-funded and non-funded studies. If lawmakers approve the proposed changes, school-leavers who would wish to enrol in higher education schools would have to pass 3 national-level maturity exams, including those of the Lithuanian language, mathematics and one optional exam, and an exception would be made for those wishing to study arts as they would not be required to take the mathematics exam. If approved, the changes would come into force in 2021.

Number of road traffic victims on a steep decline

The number of road traffic victims in Lithuania has gone down at the fastest rate in the European Union, the country’s Transport Ministry said on Thursday, June 20. Figures from the European Transport Safety Council show the number of road traffic deaths dropped 75.9 per cent in 2001-2018 in Lithuania, the most among EU member states. It went down by 73.1 per cent in Latvia, followed by Slovenia and Spain (both 67.3 per cent), compared to the average EU drop of 54.5 per cent.

Vilnius University has gone up by 30 position to the 458th place in the global QS World University Rankings 2020. Vilnius University holds the highest position among Lithuanian universities in the 500-university ranking, and is the only one to have improved its ranking. Vilnius Gediminas Technical University shares 591–600 places, compared to 581–590 last year. Kaunas University of Technology shares 751–800 positions, and Vytautas Magnus University remained in the same position for a third year running, sharing 801-1000 places.

Lithuania’s Prosecutor General Evaldas Pašilis says he heard no criticism from President-elect Gitanas Nausėda during their meeting on Tuesday, June 18, but pledged to improve prosecutors’ selection procedures. The chief prosecutor said he heard the future president’s wish to depoliticise the prosecution system, and improving prosecutors’ selection procedures was one of the issues discussed during the meeting.

Lithuanian farmers who have incurred drought-related losses cannot expect compensation from the European Union, vice minister of Agriculture Venantas Griciūnas said on Wednesday, June 19. He did not answer the question on whether farmers could expect some sort of compensation from the national budget. The drought level was reached in three municipalities earlier this week. Meanwhile, the Ministry of Agriculture will compensate farmers for losses incurred due to drought in 2018, with 8.5 million euros allocated for that purpose.