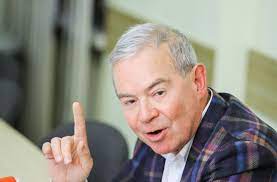 De Facto reported on June 13, that if the parties elected to Ventspils City Council act as they promise, then Ventspils Mayor Aivars Lembergs, currently imprisoned, will lack the votes to become the Mayor for the eighth time. However, another person of his party Latvijai un Ventspilij could be candidate for the post, Latvian Television’s broadcast De Facto reported June 13.

A majority of MPs are required to elect the City Mayor.  Latvijai un Ventspilij  won seven seats in the City Council, but while Aivars Lembergs is in prison there are in fact six votes. The other parties elected to the City Council – New Unity/Latvian Regional Alliance (JV/LRA) list, the National Alliance (NA) and the New Conservative Party (JKP) -have the same number of votes altogether.

For the time being,  Latvijai un Ventspilij  is silent about any further plans.

“We have already expressed in the run-up to the election that the first number on our list [Aivars Lembergs] is the candidate for president of the City Council. I’m sure it’s possible. How it goes, we will see it on July 1,” Lembergs’ deputy Jānis Vītoliņš said. The first meeting of the newly elected council should take place on July 1.

“I think that each of the six members of the anti-Lembergs coalition is aware of its historic mission in Ventspils,” said the City Council Member Ģirts Valdis Kristovskis (JV/LRA).

He and representatives of other parties, with the exception of  Latvijai un Ventspilij , believe that Lembergs cannot run the city while arrested, both because he was convicted of serious crimes at first instance and because it is not possible to run the council from prison.

The newly elected City Council deputies do not say a strict “no” to any other candidate of the party.

“If anyone other than the Lembergs family is directed, we could consider this situation because we aim to work,” said JKP’s Member Bruno Jurševics, and added that the opposition can also nominate its own candidate.

Lembergs himself is not allowed to participate remotely in the work of Ventspils City Council. The law does not provide him using a computer while imprisoned. Lembergs will also not be able to vote for himself as President of the City Council, even if the party will choose to nominate him.

One of Lembergs’ deputies, Didzis Ošenieks, said at a press conference this week that “those who are from Riga will want to give advice” to the newly elected deputies, while  Latvijai un Ventspilij  plan to talk to “local people.”

The party is scheduled to hold a board meeting next week, after which it will start negotiations on cooperation with the other parties elected in the City Council.

After 12 years of court hearings, the court of first instance  delivered a judgment   in the high-profile Aivars Lembergs trial on Monday, February 22. The Riga Regional Court sentenced Lembergs to five years in prison, confiscation of property and a fine of 20,000 euros after finding him guilty on a number of the charges relating to bribery and money-laundering that he faced, while acquitting him on some other charges in the complex and long-lasting case.