Latvian President highlighted the special relationship between his country and Germany 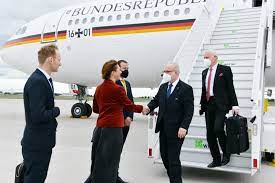 Latvian President Egils Levits on October 1 highlighted and praised the special relationship between his country and Germany at an event organized by the German Embassy in Rīga.

Germany is the country with which Latvia has the “deepest historical relations” and is “our best trade partner, we have very close cultural ties,” Levits emphasized.

“We differ in economic weights, but have common political goals in Europe,” said the Latvian head of state in fluent German, naming climate protection as an example.

Germany and Latvia also share the same ideas when it comes to the way Europe should develop and how the European Union could become more efficient, according to Levits.

“We work very closely together to shape Europe,” he said, referring to recent talks with German President Frank-Walter Steinmeier. Both heads of state last met in Berlin in May and just two weeks ago, when they were celebrating the anniversary of diplomatic relations between Germany and the Baltic States together with their Estonian and Lithuanian counterparts, Kersti Kaljulaid and Gintanas Nauseda.

Germany and Latvia, Estonia and Lithuania mark two anniversaries in 2021: The establishment of diplomatic relations 100 years ago and their resumption after the fall of the Iron Curtain 30 years ago.

Levits was also diving into the past at Friday’s event in the Small Guild in Riga during a discussion with former German diplomat Hagen Graf Lambsdorff. Both were their country’s first ambassadors when diplomatic relations between Germany and Latvia were restored 30 years ago.

Sharing some anecdotes about the beginning of their diplomatic journey and the challenges they faced in the early 1990es, both recounted how they handed over their credentials and described how much it personally meant to them becoming their home countries’ first official representatives in their second home.

Levits has spent a big part of his life in the former West Germany, where he emigrated with his parents in 1972 when Latvia was still occupied by the Soviet Union. He went to school at the Latvian Gymnasium in Münster and graduated with degrees in law and political science from the University of Hamburg, before engaging himself in his homeland’s freedom movement and restoration of independence.

Whereas Lambsdorff derives from a Baltic German family that lived in what is now Latvia for centuries. The first ancestor came to what then was known as Kurland in 1239, where also Hagen Graf Lambsdorff’s family found their home – his father was born in the Talsi district. During his stint as German ambassador to Latvia, Lambsdorff thus also engaged in tracing and visiting the roots and former belongings of his family that – like most Baltic Germans – had to leave the Baltic States in 1939 following the Hitler-Stalin-Pact.

Both former envoys shared fond personal memories also about August 28, 1991 when Germany and the Baltic States reestablished their ties at a solemn ceremony at the German Cancellor’s office in Bonn. While Levits was present at the event hosted by Helmut Kohl as legal advisor to then Latvian foreign Jānis Jurkāns, Lambsdorff was posted at that time at the German embassy in Washington. He received a call on the very same day from the German foreign office and had two hours to decide to become German ambassador in Riga.

“I was really very happy being posted here, even if everything had to be arranged very, very quickly“, Lambsdorff said, adding that he was “excited and overwhelmed by the generosity“ with which he was welcomed in the land of his ancestors – despite previous historic tensions between Baltic Germans and Latvians.

In Levits’ memories of August 28 especially present are the word of then German foreign minister Hans-Dietrich Genscher who promised German support for Latvia’s and the two other Baltic countries’ integration with the European Union.

“The promise has been fulfilled. We are both members of the EU and the Nato“, the Latvian head of state said, “It was of course a very special feeling that we were now fully recognized and that diplomatic relations had been established,“ Levits said.

“We considered Germany as the most important friend in Europe,“ he added.