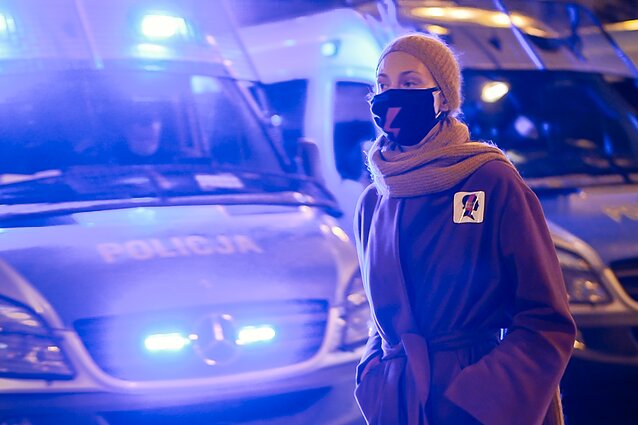 While many women protest for the right to their bodies, some opt to continue with their pregnancy despite knowing that the child will die soon after birth. What’s the human side behind the abortion laws in Poland? Magdalena Chodownik reports.

It was during one of the Women’s Strike protests in Warsaw in November 2020 that activists from Abortion Dream Team, an organisation that helps Polish women who need to terminate pregnancy, organised an “abortion coming out” – a public declaration of having had an abortion.

One by one, women grabbed a megaphone and publicly talked about their experiences, feelings, anger, as well as the stigma they face in Poland. “I had an abortion,” said the women, “and I am not ashamed.”

Among them was Zuzanna, an activist and feminist. “I want to admit that it wasn’t only me who had an abortion, but also my mother and my grandmother,” she said to the women gathered around. “I told my father about it only last Tuesday. My father votes for the Law and Justice party. It was his birthday.” The crowd responded with applause.

Zuzanna had an abortion while living in the United States. No one judged her for it there. “And why I had an abortion is nobody’s business,” said Zuzanna. “We cannot give up.”

While for some people, like Zuzanna, the solution is clear, others strongly refuse to consider abortion as an option. For many, the choice can be very difficult.

“Nobody is prepared for this kind of information,” said Sławomir Łukasik, the father of Samuel who died 31 minutes after his birth. When his wife Katarzyna was pregnant, his son was diagnosed with a fatal genetic defect, the Edwards syndrome.

They received the news on the day when the whole family, including two healthy children, went for the first ultrasound scan. They wanted to experience it together, to see their son and brother developing. No one expected any complications.

“We have been informed that if the defects are confirmed, the doctor will probably order us to terminate the pregnancy,” added Katarzyna Łukasik, Sławomir’s wife.

However, the Łukasiks decided not to terminate the pregnancy – the main motivation was their Catholic faith and perceptions of morality.

During subsequent tests and medical analysis, they learned from the doctor about the existence of a perinatal hospice for parents who choose to continue their pregnancies even if the newborn will die shortly after birth.

They departed for the Hospice of the Little Prince in Lublin, run by father Buczyński, a Franciscan. There, they felt understood.

“There are many different emotions in this situation. Every day we were listening to see if Samuel was still alive, but we were also feeling lucky that he was still with us, although the chances that he would survive the birth were very small,” said Sławomir. “We simply tried to enjoy each day.”

Even today, several years later, Katarzyna and Sławomir say they do not regret their decision.

Although they do not join the protesters, they do not believe that tightening laws or prohibiting abortions is the way forward.

“It’s better to inform people, show them the alternative. Make them aware that there is always a way out of such a situation, that there are people who will help in these difficult moments,” Sławomir said.

Protesting from a wheelchair

Since October last year, people in villages and smaller towns have joined the protests, despite the  reported threats of being arrested, fired from their work or expelled from universities.

Milena Kwiatkowska joined the Women’s Strikes in a northwestern Polish town of some 12,000 people. “I knew that in Warsaw women were already protesting, so we, in Myślibórz, joined in,” said Kwiatkowska. “I have a loud voice and I can scream, so I was asked to go in front of the protest.”

“There were many insults directed at us, very often obscene. They called us ‘mad uterus’. They said we wanted to kill children,” she recalled. “And this wheelchair also makes me more visible.”

Due to complications after difficult pregnancies and miscarriages, Kwiatkowska had her leg amputated several years ago after her last miscarriage when she was hospitalised with a heart attack.

“They pulled blood clots out of my heart,” she said. Six months later, her leg had to be amputated due to more complications.

“My doctors did not inform me that there was a risk of thrombosis after miscarriages and that there could be these kinds of consequences. I was not told that I could have taken pills, injections to prevent it […]. I didn’t know anything.”

Today she is in a wheelchair. “The gynecologist later told me that I could not get pregnant any more because it could result in death for both the baby and me. He said it was a miracle that I was alive.”

After paying a heavy price to have children, Kwiatkowska thinks that decisions concerning abortions are women’s personal choices.

“It is her body, her choice and her conscience. Why should someone decide for us how to live?”

“Whoever does not survive this, will not know what it means to lose a child. This trauma does not pass. And if the baby is born, then there is a coffin, a funeral, and walks to the cemetery. This can be never forgotten. And this could end tragically for women, with depression or even suicide.”

But her activism has put her on the radar of the local law enforcement.

A scandal broke out when someone hit a priest who, according to the protesters, was hurling insults at the demonstrators. Later, the police knocked on Kwiatkowska’s door.

The officers said she was the organiser and accused her of staging an illegal demonstration during the pandemic.

“I didn’t admit to anything because I wasn’t an organiser. There are no protests leaders in our city,” she said. The case is due to reach the court.

According to Kwiatkowska, the police are not to blame. However, the pressure on Women’s Strike comes from the top officials, she added.

On October 22, the Constitutional Tribunal in Poland ruled that abortion is unconstitutional even when the fetus suffers from severe genetic diseases. This has left abortion legal only in two cases –rape or when the mother’s life is at risk.

The decision was met with fierce opposition, but still entered into force in late January.

Last year in Poland, slightly more than 1,000 legal abortions were performed. Virtually, all of them concerned pregnancies in which the fetus had irreversible genetic defects. Therefore, critics say that the new law will practically rule out abortions.

According to NGO  estimates – there are no official data due to the illegality of abortion – up to 150,000 women in Poland perform abortions each year. Most of them order abortion pills from abroad and take them at home or travel to a country where abortion is legal.

Critics argue that the new legislation will particularly affect poorer people – those who can afford buying abortion pills or go abroad will do it, but the poorer women will be left neglected.

On the one hand, they will be forced into parenthood, on the other, the Polish state does not offer sufficient financial assistance to people staying at home with a disabled child. The assistace amounts to 445 euros, around the same as the minimum wage. The carer also cannot work, as it would mean losing the assistance.

Women’s protests in Poland have been the largest demonstrations in the country in three decades, since the times of the Solidarity movements.

A poll in November 2020  showed that 70 percent of the Polish society supported opposition to the decisions of the Constitutional Tribunal.

Paradoxically, the tightening of the already strict abortion law in Poland resulted in an open debate. It has never been a topic as urgent and as discussed as it is now.