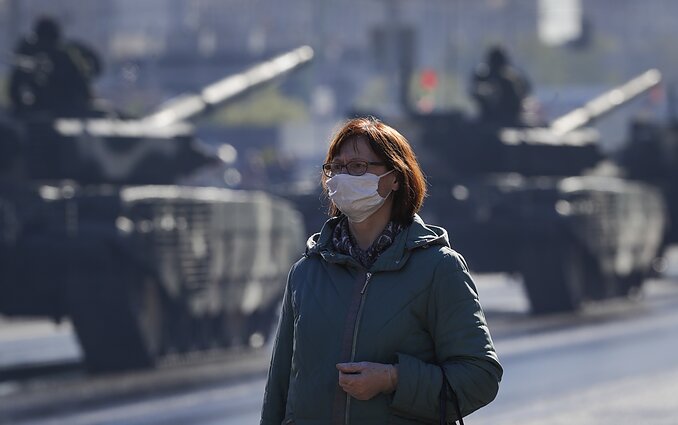 Despite Belarusian leader Alexander Lukashenko claiming the virus doesn’t exist, the Covid-19 pandemic is visible throughout the country. Andrey Vozyanov, a lecturer at European Humanities University in Vilnius, reports from Minsk.

In southern Belarus, brigades of medics and police officers measure the temperature of every commuter and check them against a self-isolation list – established to track people in mandatory 14-day isolation after returning to the country from abroad.

These have been just some of the few mandatory measures the Ministry of Health succeeded to establish, despite denials and dismissals from the top.

Bringing locally-produced masks and suits to Zaslawye and Volozhin, towns near the Belarusian capital, myself and another volunteer found people wearing masks and posters announcing rules of “respiratory etiquette” pasted on walls across the towns.

The medics we spoke with, although concerned, are now feeling more prepared for the virus upsurge than in early March, the time of the first outbreak in Vitebsk.

Back then, Lukashenko called European lockdowns “corona psychosis”, stated that Belarusian economy could not afford the quarantine, and recommended the population to do more physical work, go into sports, and drink more vodka to “boost their immune system”.

Now, several hospitals that had to mobilise to accept patients with Covid-19 started their transition back to normal work mode, as the peak of the pandemic has passed in this province, according to Uladzimir Karanik, the Minister of Health.

In Vitebsk, the first outbreak in the country reported despite government denials, left thousands  infected.

Across Belarus, ordinary people have taken steps themselves – organising grassroot initiatives and protesting through civil disobedience.

Without any direction from the state, 53 percent of people stopped going out without an emergency and 47 percent stopped using public transport,  according   to SATIO, a Belarusian marketing research company.

As of May, the central government – essentially, Lukashenko and his Executive Office – haven’t announced a single formal ban in Belarus.

Businesses, and not the authorities, have placed signs along the main streets of Minsk, telling people to wash their hands and wear masks. Local supermarket chains have been playing audio announcements and have drawn lines on the floor, encouraging customers to keep distances from each other.

As most cinemas closed, those still open report that attendance has  dropped by 98 percent in comparison to March and April 2019. Public events had been cancelled by organisers, with venues across the country announcing quarantine. The night life has stopped. Fan groups of leading football clubs in Belarus have also  called   to suspend the national football cup and boycott the games, despite Lukashenko still playing hockey at the end of March.

The real-time self-isolation  index   by Yandex displaying the amount of people outdoors, showed that Minsk became about three times less crowded than before the pandemic.

Breaking with the dismissive attitude of the top leadership, several government agencies and municipal institutions have taken their own measures to curb the spread of the virus. Public transport vehicles, lifts, and streets are regularly disinfected, while police officers wear masks.

Since the beginning of the pandemic, the Ministry of Health has been seeking to distance itself from the president’s narrative: reporting the unsettling statistics daily, recommending people to stay at home, and holding weekly online Q&A sessions.

Nevertheless, given that the executive power is concentrated in the hands of Lukashenko, warnings from official experts have not led to a decisive anti-corona policy in Belarus.

The public has shown overwhelming support to health workers. Within days, Belarusians donated more than 1 million euros to a bank account opened by the Ministry of Health.

Virtually every city in Belarus now has an online chat coordinating collection and purchases of masks, medication, and lung ventilators for hospitals.

In April, Hackerspace Minsk modelled and manufactured over 40,000 protective face shields and 6,500 protective suits, for free. These have been handed over to 152 towns and villages all over Belarus, with a priority given to remote provinces.

Crowdfunding platforms Molamola and Ulej have been mediating the purchase and direct delivery of resources to hospitals. The Imena Initiative also assists particularly vulnerable groups within the healthcare system – for example, nursing personnel far from Minsk.

Cafes and restaurants pack and deliver free meals to health workers. A commercial company in Vitebsk has also developed express tests for coronavirus that were certified within days.

After petitions by teachers and parents, the Ministry of Education has introduced “flexible attendance” of lessons at the end of March and prolonged the spring break for one week, reducing the threat of the virus spreading further.

Breaking the official line, however, has cost a chief physician of Vitebsk hospital his job. Siarhei Lazar was fired three days after telling about the harsh conditions to a Belarusian news website, Tut.by.

Belarusians are facing obstacles in their effort to stay home. Some employers have been able to arrange remote working, but workers elsewhere had to go on unpaid leave.

The government has promised to quadruple unemployment compensations for the next quarter, but it would still mean less than 100 euros per month, even if it’s implemented.

For the elderly population, self-isolating is not any easier, even though volunteers are helping with shopping for food and supplies.

The average monthly pension of around 170 euros might be enough for food in Minsk, but not always for the necessary medication. This pushes some elderly ladies to continue their petty trade outdoors, putting them at risk of infection.

While some stay home, others gather in crowds – at the president’s pleasure

The president’s administration drew thousands of Belarusians to mass events in April and May. On April 25, the yearly Subbotnik, when people hold a collective clean-up and communal work, proceeded regardless of the risk.

Then, on April 12 and 29, thousands of believers gathered to celebrate Palm Sunday and Easter, with Lukashenko’s family also attending church.

Despite several petitions from citizens, the president refused to cancel the Victory Day parade on May 9 in Minsk. On the same evening, a show – sarcastically labeled “concert for the immortal” by Belarusian social media users – was held in the Belarusian capital.

According to Tut.by and Charter97 journalists in Belarus, workers of state-owned factories, institutions, students and even people who had recovered from Covid-19 were coerced to attend.

Previous infection statistics clearly showed upsurges in new cases just 4-5 days after the mass gatherings. It is now widely believed, both in the media and on social networks, that yet another spike will follow the May 9 parade.

Belarusians are utterly pessimistic about the months to come, not only because of the virus. Due to an increase in prices for Russian oil, economists were predicting Belarusian GDP to shrink in 2020 even before the coronavirus hit.

Many suspect that if Belarus manages to sail through the pandemic without a giant death toll, the president will credit himself with success before the August election.

Belarusian citizens, who used to enjoy the lowest rejection rates among all Schengen visa applicants, are also afraid that other countries will be reluctant to approve their visas due to the Covid-19 denialist image of the president.

After the death of a Russian citizen, supposedly from Covid-19, in a hospital in Vitebsk, Anton Krasovsky from the Russian propaganda news agency RT wrote in his Telegram channel that “Belarus must not exist”.

And while other European countries are softening their restriction measures after weeks of lockdown, Belarusians still struggle against their own state to be able to stay home.

Andrey Vozyanov is a lecturer at European Humanities University in Vilnius and a researcher at Minsk Urban Platform. He defended his PhD in social anthropology at the Germany’s University of Regensburg in 2018 and currently lives in Minsk.