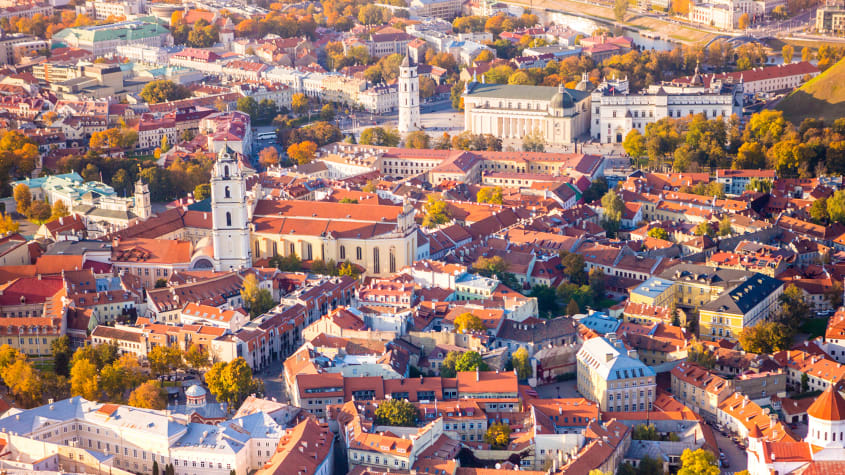 Lithuania is only a small country on the outskirts of the European Union (EU) with palatable weather and complicated history; a modest economy and population a third the size of London’s would hardly render it a key player on the global stage. You will, therefore, perhaps be forgiven for overlooking the fact that this Baltic nation, rich with lavish landscapes and stunning castles, has, in recent years, surged to become Europe’s dominant force in fintech.

According to Findexable’s Global Fintech Index 2020, Lithuania is the fourth most powerful fintech hub in the world, ranking behind the US, the UK and Singapore, leaping 14 places between 2019 and 2020. While it’s an astonishing feat, it’s no happy accident and follows years of calculated efforts by the nation’s biggest institutions. The parties involved include not just politicians and the Bank of Lithuania, but corporations, accelerators, startups, investors, and others, all working towards the common goal of putting Lithuania’s fintech scene on the map. Brexit, meanwhile, has only served to fuel this mission, with companies seeking a viable base from which to serve EU customers, now that the UK has left the single market.

Lithuania’s recently appointed vice-minister for finance, Vaida Cesnuleviciute, reflects on the challenges Lithuania once faced, chiefly that its legacy financial services industry was weighed down by a lack of competitive edge. “Our banking sector was one of the most concentrated, or even the most concentrated, in Europe,” she tells IT Pro. “We thought we needed to foster competition and to do that we thought of not only focusing on the traditional banks, but promoting this emerging fintech trend. What happened is that we started to see how to make our jurisdiction more attractive for fintech companies.”

The place to do business

Fast forward to 2021 and huge names like Revolut and ConnectPay lace a growing index of more than 200 companies revelling in what they describe as a fintech-friendly environment. This comprises several pillars including favourable regulations as well as a flowing pipeline of skilled workers. Member of the board of the Bank of Lithuania, Marius Jurgilas, says that Lithuania’s appeal isn’t obvious, and so its various institutions undertook a lot of risk in trying to foster this environment. “Due to coincidences, or specific policies, it happens to be, or is already emerging to be, one of the hotspots for tech companies due to a very compact and, yet, dense talent pool,” he explains. Jurgilas, known as the ‘Godfather of Fintech’ in Lithuania, explains that the skill base swelled with the arrival of major companies over the course of the last decade, including Scandinavian commercial banks, as well as global giants like Western Union in 2011.

“It really developed a pool of talent; very young individuals going into this field and all of a sudden being exposed not to some local firms who are just doing the across-the-street type of finance, but a global business perspective,” he adds. This exposure, in turn, inspired an entire generation to aim high in their own ventures, leading to an explosion in the number of startups. This coincided with a push from the public sector to introduce more competition, reinforced with a political willingness to take on the risk. Companies with Lithuanian bases now freely sing the praises of this business culture, lauding various aspects of this regime ranging from licensing to the space they’re given to experiment with technology.

Banking challenger Revolut first opened its Lithuanian office in the capital, Vilnius, in 2017 due to this environment, as well as easy access to specialists. CEO of Revolut Bank (EU), Virgilijus Mirkės, tells IT Pro that Lithuania created a clear and transparent process offering startups assistance from the Bank of Lithuania. This is also balanced with strict rules on supervision, and a directive that companies must contribute back to the economy. For ConnectPay CEO Marius Galdikas, whose company is headquartered in Vilnius, one of the best innovations was the regulatory sandbox. This meant startups could test systems under development in a closed environment, allowing them to evaluate product performance in real-life conditions and make adjustments before release. Seeking electronic money licenses, required to operate in Europe, was also made to be significantly easier; while most countries usually take a full year to issue these licenses, the process in Lithuania takes three to six months.

‘If you aim for mediocrity, there’s very little point in starting’

“We managed to do something very significant, and we managed to put a lot of effort into maintaining and advancing this,” Cesnuleviciute says. From the outset, the various institutions involved in hatching this plan aimed high, with the explicit intention of catering to all fintech firms, regardless of size or need. She adds that if you aim for mediocrity, there’s very little point in starting in the first place.

The government of the day mobilised several institutions to establish an intergovernmental working group, with the Ministry of Finance playing a central role. This meeting of minds culminated in a national action plan, written into government strategy, endorsed by the prime minister, led by the finance minister, and implemented by the central bank. Beyond its regulatory ‘sandbox’ and licensing regime, the Bank of Lithuania rolled out a platform known as CENTROlink to give fintech firms access to an account with the central bank, something that was previously reserved only for commercial banks. Secondly, it implemented technology to allow fintech firms and other companies to onboard customers remotely, vastly reducing one of the biggest barriers to selling their services and products. As a result of these efforts, Lithuania’s digital economy is growing four times faster than the wider economy, while this fintech-friendly environment sparked a “gravitational effect” that’s attracted more and more companies over time.

Other entities, including accelerators and investment firms, have also played a key role, with accelerators 70V and Rockit serving as prime examples. Head of Rockit, Šarūnė Smalakytė, tells IT Pro that her company provides coworking services and an events platform, in addition to startup incubation and acceleration programmes. “As an incubator and collaborative space,” she says, “we have helped multiple Lithuania-based fintech firms including Revolut and NIUM to start their business journeys.”

Rockit plays a role in the fintech community by encouraging collaboration between different stakeholders. It also surveys and maps out the country’s fintech ecosystem annually, providing intel for both businesses and investors. It’s a similar role to that played by Startup Wise Guys, another incubator that connects businesses and helps startups experiment with new ideas. “As an accelerator and fund, we invest in startups in their foundational days to provide them financial resources and skills that will help them validate products in the market and start getting traction financially,” Startup Wise Guys partner Jone Vaituleviciute says. “Lithuania has already built a reputation as a desirable destination for foreign fintech startups. There are now also a number of homegrown Lithuanian rising stars, such as TransferGo, Ondato, kevin., Paysolut and HeavyFinance. These companies, which we invest in or connect to our participating startups, are generating enormous amounts of talent and know-how. And they are becoming a catalyst for the emergence of new waves of fintech startups.”

The shadow of Brexit

Lithuania’s unprecedented surge coincides with the uncertainty that descended onto London’s own fintech scene following the outcome of 2016’s Brexit referendum. Although the UK was once considered the gateway into the EU, this mantle has now fallen into the hands of several pan-European hubs, Mirkės says. For Revolut Bank, its Lithuanian base and licenses are now essential for operating in Europe, which is the same story for many fintech companies hoping to serve EU customers through the so-called passporting regime.

“It’s not a good thing that [Brexit] happened,” Cesnuleviciute laments, “but for Lithuania, especially for fintech, it provided momentum. I think we were kind of an obvious choice when thinking of where to get these licenses.” With the UK no longer in the picture, Lithuania became the country to have issued the most e-money licenses. While only a handful of firms have fully relocated to Lithuania due to Brexit, Jurgilas agrees that you cannot dismiss Brexit’s role in boosting Lithuania’s fintech scene, especially in terms of skills.

He’s noticed, in particular, a steady flow of skilled workers from the UK and other countries back to Lithuania. This coincided with a rise in opportunities due to the growing number of companies operating in the country. “Due to Brexit, due to the pandemic and the ability to work remotely,” he explains, “they’re finding that living and working from Vilnius, Lithuania, is pretty nice – minus the difficulties of living in a [megacity], plus the benefits of being close to your roots, your family, extended family, and being able to contribute into this vibrant new ecosystem, which is global.”

Another reason so many businesses have been keen to establish Lithuanian subsidiaries is to cope with what they expect to be diverging regulations between the EU and the UK. We’ve already seen difficulties arise from this in terms of data protection. Although the UK recently obtained a draft data adequacy decision, meaning data can continue to flow between territories, this is fragile, and may be revoked in future should the UK diverge too far from GDPR. Similarly, Jurgilas insists that businesses hoping to serve customers in both jurisdictions will be stuck in the middle as the regulatory environments continue to drift. One early example of this divergence manifests in crypto assets, with the EU seeking to regulate blockchain-based products through its Markets in Crypto-Assets Regulation (MiCA).

With the Brexit effect still not fully settled, and Lithuania continuing its meteoric rise, could the small Baltic nation exploit this situation to overtake the UK? Galdikas seems bullish of its chances, explaining that while the UK will remain a strong player, there’s a real opportunity for Lithuania to become the leading hub if it continues in its current direction.

Both Jurgilas and Cesnuleviciute, however, downplay this notion. For Lithuania’s Godfather of Fintech, in particular, there would be downsides to wearing such a heavy crown.”If you would ask me a year ago, probably I would be very flamboyant and I would say ‘absolutely, of course, why not’,” Jurgilas says, “but with a pandemic type of situation, I think that I’m becoming more pragmatic. Maybe we have achieved what we, as a nation, needed.

“When we proposed to the government that let’s be the centre for fintech in the region, nobody believed that it could be achieved, but it was a target on which we built everything. And we did it in a rigorous and orchestrated way. Now, is there a reason – is there a need – to be the global leader? Being a global leader comes with costs, and I’m not sure that our society or politicians are ready to accept those costs.

“Maybe the focus needs to be in a different place, I don’t know, green agriculture or some other area. Our president is talking about making sure that inequality is being addressed as a primary objective. I’m feeling that maybe the subject of fintech is still up there, but, at the same time, we have other social issues to be talking about, and maybe technology can be used to solve those issues.”