History’s got no forgiveness for tardy reformers: PM 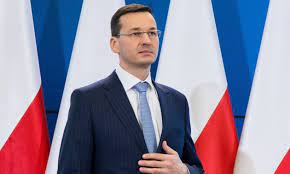 “History forgives not those who undertook the reformatory effort too late,” PM Mateusz Morawiecki told Lithuanian portal Delfi.lt in a broad article dedicated to the 230th anniversary of the proclamation of the Constitution of May 3, 1791 — Poland’s first and the first such act in Europe.

The PM argued that the said constitution “is a historical document and the lesson taught by its era display universal qualities.” He went on to write that “today the authorities of Poland and Lithuania nurture the traditions of the Polish-Lithuanian Commonwealth because they are our common and unique legacy,” that the shared history bringing Lithuania and Poland together is the bedrock for future cooperation of both states. “We did concelebrate the 450th anniversary of the Union of Lublin, the 610th anniversary of the Battle of Grunwald, whereas today we are guided by the events that unfolded 230 years ago,” he wrote.

The official went on to stress that unlike in Europe and America of the dusking 18th century, where the fight for rights and freedoms was marked with bloodshed, “the Polish-Lithuanian path towards modernity led through a peaceful reform of the system of power. Long did the elites of the day grow to the conviction of necessary changes.”

The PM went on to recall 18-19th-century Irish philosopher and conservativist Edmund Burke’s opinion that the Constitution of May 3 and the attached act of the Betrothal of Poland and Lithuania “were events of European and global scale”, albeit had failed to turn the tide for the First Polish Republic.

Referring to the aftermath of the proclamation of the constitution, the PM stressed that “modernity does not simply come out of thin air, whilst history does not forgive those who undertake the effort of modernisation and reform belatedly.” This is why, the PM argues, both countries should “know how to use the time of peace to strengthen the institutions of the state, economy and society.”

“This is why the funds coming from the EU Recovery Fund are our raison d’etat,” the PM stressed, adding that “Poland has prepared a comprehensive development programme — the New Polish Deal, which is a set of grand investments in the fields of health, digitisation, infrastructure and natural environment.”

PM Morawiecki also warned that “the ancient demons of geopolitics and imperialism sleep not,” adding that the Polish-Lithuanian “remembrance of the past is the remembrance of our heroism and solidarity in the face of a common foe. The commonality of experiences is one of the pillars of the Polish-Lithuanian relations of today. We know what price the entire Europe pays when the threats coming from the East are ignored.”

Stressing the importance of the tightening of cooperation and the development of shared projects such as the construction of GIPL gas pipeline, the investments in LNG terminals, the synchronisation of the Lithuanian electric grid with the West and the train connection of Rail Baltica, Mr Morawiecki also brought the attention to the importance of the Polish-Lithuanian defence cooperation.

“Arm in arm, we co-create NATO’s eastern flank and the Polish-Lithuanian-Ukrainian LITPOLUKR brigade. These projects are carried out not at the prize of sovereignty, contrarily, they are pursued in the name of defence,” the PM wrote, adding that “looking at Belarus whose authorities have been unveiling their true face in the past months, we can clearly see what a painful thing it is to relinquish one’s own sovereignty.”

“Today, Warsaw and Vilnius are brought together by ample tokens of goodness and friendship. There is a line of trust that we should not sever. W must, however, look at matters that have not been resolved in a satisfactory way,” the PM said, recalling the issues of Polish education in Lithuania, the lack of a law on national minorities, and the issue of the partial absence of the spelling of Polish names in public places.

“The expectation of the support of national minorities and the reciprocal cultivation of culture and language should constitute an important aspect of our dialogue,” the PM stressed.