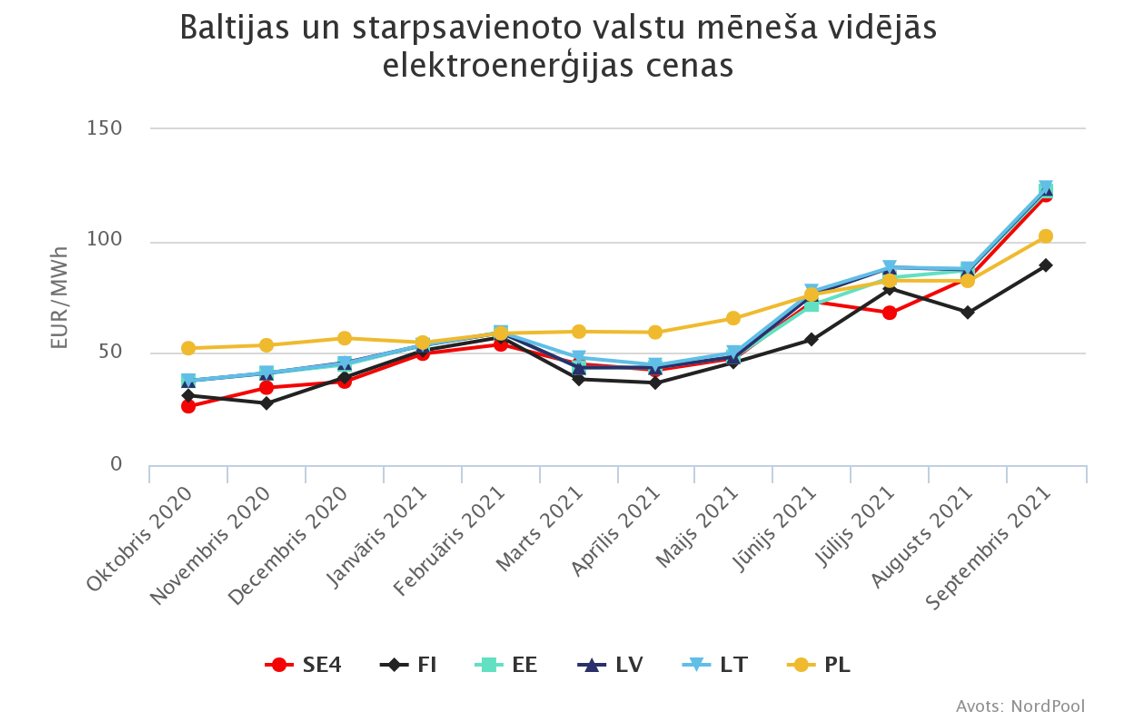 According to information published October 6 by JSC Augstsprieguma tīkls  (High Voltage Network), in September, electricity prices in Latvia were the highest since the electricity market opened, .

For the first time ever, the average price was three-digit, reaching EUR 123.5 per megawatt-hour. This is more than three times higher than in September 2020, and 41.4% higher than in August of this year.

Electricity prices have also increased significantly elsewhere in Europe – in Poland in September the price was €102.26 per megawatt-hour, in the other Baltic States, Denmark, and Sweden’s 4th trading area – €120 to €124 per megawatt-hour, while in Germany, France, Belgium, the Netherlands and Austria the average monthly price fluctuated around €135 per megawatt-hour, according to High Voltage Network’s electricity market survey.

The price increases in Latvia are mainly due to the following reasons: gas and CO 2quota prices have increased significantly, water reservoirs in Norway are less full, the development of wind parks is lower, resulting in energy sources with a higher price. Short-term price increases in the Baltic were also caused by the lack of interconnection due to maintenance work, said the company.

In September, electricity imports to the Baltic from third countries decreased by 33% and from the European Union countries by 19% compared to August. The changes in imports are linked to an increase in production in the Baltic after a very low level of production in August this year and to technical constraints. As of September 15, the decision by the Lithuanian regulatory authorities results in a 19% reduction in line capacity from Russia to the Baltic, with the aim of preventing electricity from entering the Baltic States’ market from the Belarus nuclear power plant.