Green happiness: the growth of urban gardening in Rīga 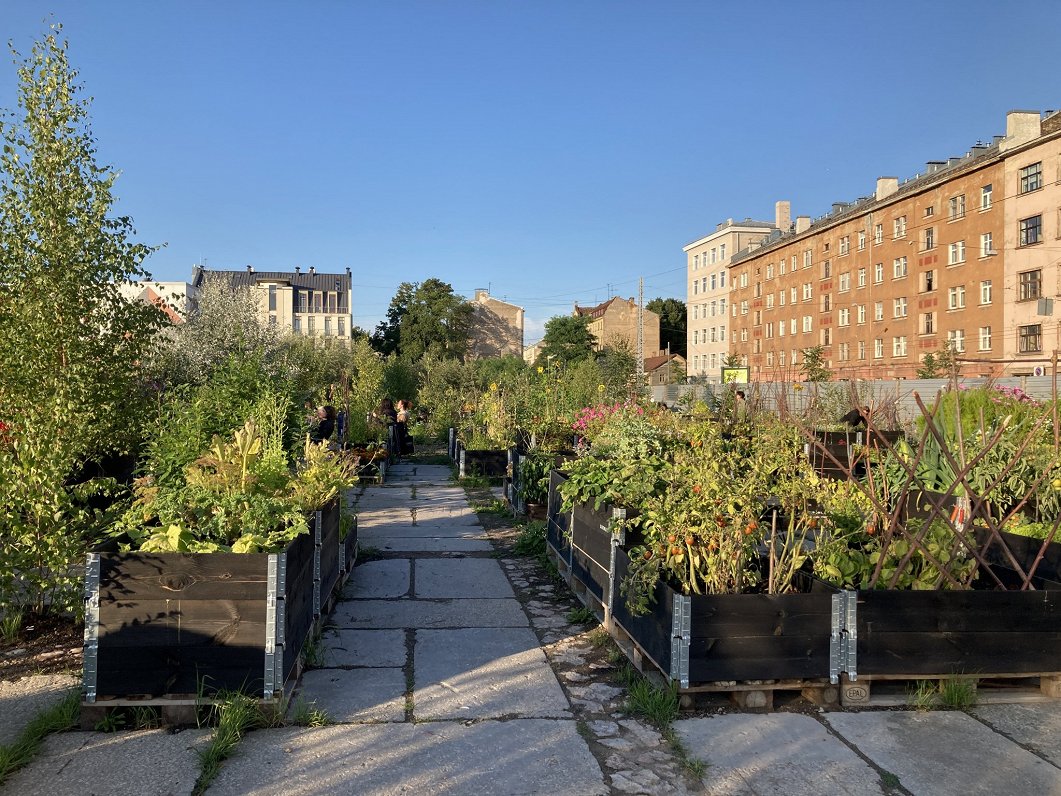 Escaping the confines of your own four walls, keeping distance and relaxing – in the time of the Covid-19 pandemic this currently works particularly well in your own garden. Lucky are those who have a summerhouse, an allotment garden, or a green space in the countryside. For those that don’t, mobile urban alternatives are now available in the Baltics.

In Latvia and the oter Baltic states many people have rediscovered an old pastime and are taking part in what is known as Urban Gardening. In many cities public gardens have sprung up in which gardening enthusiasts can rent a parcel of land and cultivate it as they see fit. In Tallinn, Rīga and Vilnius but also in small towns people are getting their hands dirty and growing plants and vegetables in community gardens.

Residents in a particular district are also increasingly establishing communal gardens in a move to care for previously abandoned land and turn it into public space for everyone.

Urban gardening has become a big trend. In Tallinn alone, there are now 13 community gardens that provide beloved destinations for a green break from the monotony of the city. Similar initiatives to develop urban gardening and to improve the quality of life and the environment have also been started in Rīga and Vilnius.

In both capitals the tradition of small-scale gardening in family garden allotments is old and still quite common – especially on the outskirts of the city. Yet shared community gardens have been limited.

The Sporta pils dārzi (Gardens of Sporta Pils) in Rīga are an illustrative example of how urban gardening is taking off in the Baltics. Situated in a currently unused territory in the very city centre which has been abandoned and closed off for more than a decade, there is now a urban gardening space where Riga inhabitants can rent out sections where they can plant flowers, herbs and vegetables. It is like many other urban gardens that have become popular in other urban settings.

One of the urban dwellers that have successfully applied for a plot which can be rented for one season at very democratic prices is Maija Mauriņa. “We do not have a summerhouse outside Rīga – so we are quite often here“, the hobby gardener says when showing off the public beds which are cared for by a community of like-minded people.

Around 150 local residents are part of the project that was started in late summer 2020 by a non-profit organisation which also offers gardening masterclasses and organises community activities on site.

Gardening in the middle of the Baltic metropolis is an idea which arose during the Covid-19 pandemic. Living right next door the closed-off territory which adjoins four streets, the project’s initiator Renāte Prancāne came up with the idea of urban gardens during self-isolation while starring at the adjacent unused area from her window.

“The pandemic highlighted the need for a spacious, publicly accessible urban area, as the outdoors refreshes and is a healthier alternative to public indoor spaces,”, she says. “By using strategic planning, it can also become a tool for changing citizens’ awareness and feelings about their own city.“

Remembering the strong traditions of urban gardening in New York, where she studied art history, Prancāne addressed the owner of the empty area where until 2008 used to stand the Riga Sports Palace. Originally opened in 1970 to commemorate the 100th birthday of Lenin, the iconic building later was a magnet for hockey fans. Riga’s club ‘Dinamo’ played its home games here for some decades. Following several ownership changes, the territory belongs nowadays to the Estonian real estate developer Rotermann Group which wants to build a complex of offices, apartments and entertainment facilities there. It responded positively to Prancāne’s idea and agreed to transfer the site to her non-profit organization for a period of three years, entirely free of charge, so that she could establish urban gardens there, while the preparations for construction works continue in the background.

After cleaning up the territory last autumn, the Gardens of Sporta Pils gardens opened their doors this spring. Once inside the publicly accessible two hectares of garden space you quickly leave behind the hubbub of city life. Prime examples of different fruits and vegetables are growing from wooden crates and plant boxes.

A total of 150 urban gardens are available to community members. Each of the units comes in a size of 12.5 square metre and is provided with 3 to 8 gardening boxes full of fertile soil which is ready for immediate use. The garden area includes also compost sites, work zones, and sharing points for water and gardening tools.

“I planted whatever I could get on the market: rosemary, basil, tomatoes and strawberries,“ Mauriņa explains, while proudly showing off her beds and pointing out what she has achieved in her little plots of earth. She is now putting carefully a sweet potatoes slip in the last empty corner of one of her three gardening boxes.

“This is our newcomer. I bought it today, and Mangold as well“, she says, before starting to water the newest addition to her little urban plantation.

Mauriņa has not really thought of having a garden before now. She initially was skeptical about whether or not she could ever keep up with the normal gardening pros and their green thumbs. Perhaps she all the more was happy with her first own harvested crops.

“The strawberries were very tasty and also our tomatoes and greens. We drank a lot of Mojitos prepared with our own peppermint. Happiness abounded“, the new hobby gardener says excitedly.

The big success of her gardening adventure also seemed to have convinced her family. “Initially it was called mama’s garden. The family was just ignoring me and said `Do whatever you want`,“ Mauriņa recalls with a laugh. “But then one day suddenly my husband came home from shops and proudly presented me with a blueberry plant. For me it seemed that he had become a gardener from that very moment. “

Living only a couple of minutes away from their garden by foot, the couple and their three year-old boy are now regular visitor to their plot to water their plants, see them growing, and simply enjoying their green oasis in the city centre.

“On average, we spent about ten hours peer week here, but during the recent hot period we came every day. It was so much better to spend the hot daytime periods outside. So we were sitting here until late in the evening“.

For Prancāne this confirms the desire of city’s residents to feel closer to nature, and the need for more green recreation areas. She emphasizes the fact that urban gardening is more than just growing plants and vegetables. It is also a way to cultivate community engagement and shaping the urban environment. The interest in it seems high: the demand for plots in the Sporta Pils gardens exceeds the available supply.

This feature also appears in the latest edition of the  Baltic Business Quarterly magazine published by the  German-Baltic Chamber of Commerce in Estonia, Latvia and Lithuania   and is reproduced by kind permission.